How the Alliance Remade Itself for a New Era 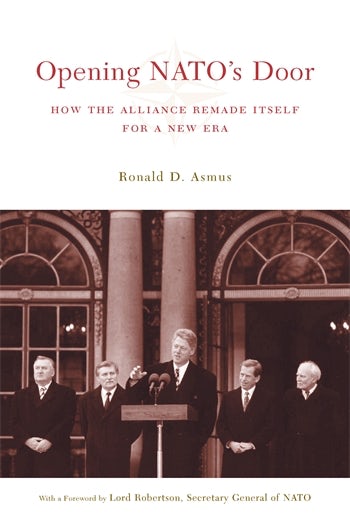 How the Alliance Remade Itself for a New Era

How and why did NATO, a Cold War military alliance created in 1949 to counter Stalin's USSR, become the cornerstone of new security order for post-Cold War Europe? Why, instead of retreating from Europe after communism's collapse, did the U.S. launch the greatest expansion of the American commitment to the old continent in decades? Written by a high-level insider, Opening NATO's Door provides a definitive account of the ideas, politics, and diplomacy that went into the historic decision to expand NATO to Central and Eastern Europe. Drawing on the still-classified archives of the U.S. Department of State, Ronald D. Asmus recounts how and why American policy makers, against formidable odds at home and abroad, expanded NATO as part of a broader strategy to overcome Europe's Cold War divide and to modernize the Alliance for a new era.

Asmus was one of the earliest advocates and intellectual architects of NATO enlargement to Central and Eastern Europe after the collapse of communism in the early 1990s and subsequently served as a top aide to Secretary of State Madeleine Albright and Deputy Secretary Strobe Talbott, responsible for European security issues. He was involved in the key negotiations that led to NATO's decision to extend invitations to Poland, Hungary, and the Czech Republic, the signing of the NATO-Russia Founding Act, and finally, the U.S. Senate's ratification of enlargement.

Asmus documents how the Clinton Administration sought to develop a rationale for a new NATO that would bind the U.S. and Europe together as closely in the post-Cold War era as they had been during the fight against communism. For the Clinton Administration, NATO enlargement became the centerpiece of a broader agenda to modernize the U.S.-European strategic partnership for the future. That strategy reflected an American commitment to the spread of democracy and Western values, the importance attached to modernizing Washington's key alliances for an increasingly globalized world, and the fact that the Clinton Administration looked to Europe as America's natural partner in addressing the challenges of the twenty-first century.

As the Alliance weighs its the future following the September 11 terrorist attacks on the U.S. and prepares for a second round of enlargement, this book is required reading about the first post-Cold War effort to modernize NATO for a new era.

Detailed... impressive... Asmus gives a fair picture of the fierce divisions within the administration, and he records the caution of several allies and the changes of mood in Moscow at a time when the alliance was deeply internally divided over the Yugoslav wars. Foreign Affairs

Asmus shares his ringside seat with his readers, which can be most informative, and great fun. Robert G. Kaiser, Washington Post

As the Alliance debates its future following the September 11th terrorist attacks on the United States, this book is required reading about the first post–Cold War effort to modernize NATO for a new era. Senator Richard G. Lugar (R-Indiana)

A unique firsthand account of one of the most important foreign policy developments of our time.... Asmus is at once witness, analyst, and historian. Timothy Garton Ash

Mr. Asmus's book is the work not just of a historian but of a visionary. Sarah Means Lohmann, Washington Times

The book serves as an engaging history lesson relayed by someone with first-hand experience, as well as an authoritative manual for high-stakes negotiations that weaves together insights on both American diplomacy abroad and the foreign policy-making process at home. National Journal

As long as one is aware that there is more to the story, one must recognize that Asmus makes a vital contribution to it. Opening NATO's Door offers details on American dealings with Russia and Eastern Europe that are often left out—or unknown—by others. Asmus gives us a rich discussion of how the Clinton Administration developed its preferences and its strategy for achieving them. Thomas S. Mowle, American Studies International

Asmus' book provides a new and rich contribution to the literature of NATO expansion. His study will be a useful resource for any student of American foreign policy, as well as experts on NATO. Ryan C. Henderson, The Journal of Slavic Military Studies

It does a brillant job of tracing out push and pull and personanilty factors in the laborious move toward enlargement. Beth Greener-Barcham, History: Reviews of New Books

Foreword, by Lord Robinson
Book I. The Origins
1. An Ambiguous Pledge
2. Dismantling Yalta
3. Aligning With the West
Book II. The Debate Begins
1. Russia First
2. Making the Case
3. "We Need A Perspective"
4. The Partnership for Peace
Book III. Across the Rubicon
1. An Ambiguous Decision
2. Shifting Gears
3. Pressure From the Right
4. Holbrooke's Return
5. Across the Rubicon
Book IV. Establishing the Dual Track
1. Establishing the NATO Track
2. A Parallel Track With Moscow
3. The May-for-May Deal
4. The Political Battle Heats Up
5. Bosnia and NATO Enlargement
Book V. Toward a New NATO
1. On the Back Burner
2. Sleeping with the Porcupine
3. Tough Love for Central and Eastern Europe
4. Ukraine and the Baltic States
5. "A Long Dance with Natasha"
Book VI. The NATO-Russia Endgame
1. Madeleine's Vision
2. Chancellor Kohl Comes Through
3. The Road to Helsinki
4. Breakthrough at Helsinki
5. Playing Both Sides of the Chessboard
Book VII. Head-to-Head at Madrid
1. Sintra
2. Playing the Heavy
3. A Baltic Challenge
4. Madrid
5. The Final Compromise
Book VIII. The Political Battle
1. Creating a Command Post: the Birth of S/NERO
2. The Campaign Starts
3. Dancing with Jesse Helms
4. New Members and New Missions
5. The Endgame

Ronald D. Asmus is senior transatlantic fellow at the German Marshall Fund and adjunct senior fellow at the Council on Foreign Relations in Washington, D.C. This book was written while he was a senior fellow at CFR from 2000 to 2002. He served as a deputy assistant secretary of state for Europe from 1997 to 2000.