Vietnamese Short Stories of the American War and Its Aftermath 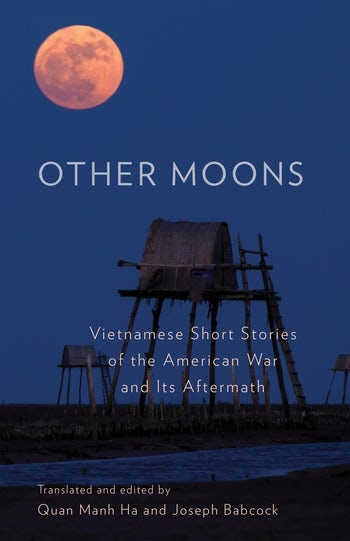 Vietnamese Short Stories of the American War and Its Aftermath

In this anthology, Vietnamese writers describe their experience of what they call the American War and its lasting legacy through the lens of their own vital artistic visions. A North Vietnamese soldier forms a bond with an abandoned puppy. Cousins find their lives upended by the revelation that their fathers fought on opposite sides of the war. Two lonely veterans in Hanoi meet years after the war has ended through a newspaper dating service. A psychic assists the search for the body of a long-vanished soldier. The father of a girl suffering from dioxin poisoning struggles with corrupt local officials.

The twenty short stories collected in Other Moons range from the intensely personal to narratives that deal with larger questions of remembrance, trauma, and healing. By a diverse set of authors, including many veterans, they span styles from social realism to tales of the fantastic. Yet whether describing the effects of Agent Orange exposure or telling ghost stories, all speak to the unresolved legacy of a conflict that still haunts Vietnam. Among the most widely anthologized and popular pieces of short fiction about the war in Vietnam, these works appear here for the first time in English. Other Moons offers Anglophone audiences an unparalleled opportunity to experience how the Vietnamese think and write about the conflict that consumed their country from 1954 to 1975—a perspective still largely missing from American narratives.

Other Moons makes widely-read war fiction from the Socialist Republic of Vietnam available in English translation for the first time. The stories offer a range of perspectives on the impact of war in Vietnam, bridging the experiences of north and south, the homefront and the battlefield, women and men, and even the living and the dead. This book will be welcomed by readers interested in war commemoration in Vietnam. Kathlene Baldanza, Penn State University

Quan Manh Ha is associate professor of American literature and ethnic studies at the University of Montana. His translations have previously appeared in Metamorphoses, CIRQUE, and the Southern Humanities Review, among others.

Joseph Babcock teaches writing at the University of San Diego. His work about Vietnam has appeared in the Daily Beast and the New York Times.