Passions of Our Time 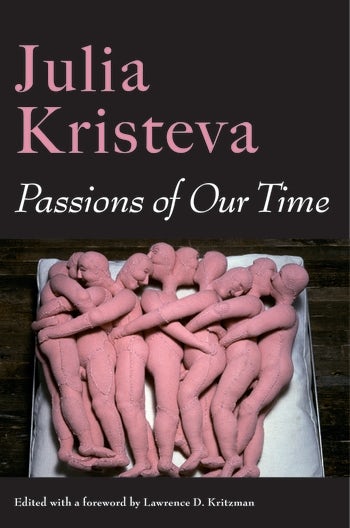 Passions of Our Time

Julia Kristeva is a true polymath, an intellectual of astonishingly wide range whose erudition and insight have been brought to bear on psychoanalysis, literary criticism, gender and sex, and cultural critique. Passions of Our Time showcases recent essays of Kristeva’s that demonstrate the scope of her capacious intellect, her gifts as a stylist, and the profound contribution of her thought to the challenges of the present.

The collection begins with а vivid recollection of celebrating, as a child in Bulgaria, Alphabet Day, the holiday honoring the Cyrillic letters, which proceeds outward into a contemplation of the writer as translator. Kristeva considers literature with Barthes, freedom through Rousseau, Teresa of Avila and mystical experience, Simone de Beauvoir’s dream life, and Antigone and the psychic life of women. A group of essays drawing on her psychoanalytic work delve into Freud, Lacan, maternal eroticism, and the continued importance of psychoanalysis today. In a series of striking investigations, she thinks through disability and normativity, monotheism and secularization, the need to believe and the desire to know. Calling for the courage to renew and reinvent humanism, she outlines the principles of a stance founded on the importance of respecting human life. Finally, Kristeva discusses French culture and diversity, rethinking universalism and interrogating the potential for Islam and psychoanalysis to meet, and pays homage to Beauvoir by rephrasing her dictum into the provocative “One is born woman, but I become one.”

Ranging from literature and the visual arts to psychoanalysis, religion, the question of women, and politics, the essays gathered in this volume deal with the experience of time in birth and rebirth, with the time of events and emergencies and, no less, with the existential dimension of time as opposed to what technologies of sensation are programmed to make of it. In her inimitable and provocative signature style, Kristeva graces her readers with brilliant readings of texts, paintings, sculptures, artists, and political events. Passions of Our Time is an excellent book. Verena Conley, Harvard University

The essays and interviews in Passions of Our Time not only thoughtfully extend and develop some of Kristeva's seminal ideas but also brilliantly address pressing contemporary issues, such as changing notions of motherhood, fatherhood, disability, and sexuality, and powerfully demonstrate that psychoanalysis is still relevant today. This volume makes it clear why Julia Kristeva is one of the most important cultural critics of our time. Kelly Oliver, author of Reading Kristeva: Unraveling the Double-Bind

Kristeva's scope is both international and cross-cultural, reaching as far as China, and as close to Western experiences as suburbia's socioeconomic decline. Library Journal

Foreword, by Lawrence D. Kritzman
Acknowledgments
I. Singular Liberties
1. My Alphabet; or, How I Am a Letter
2. Reliance: What Is Loving for a Mother?
3. How to Speak to Literature with Roland Barthes
4. Emile Benveniste, a Linguist Who Neither Says nor Hides, but Signifies
II. Psychoanalysis
5. Freud, the Heart of the Matter
6. The Contemporary Contribution of Psychoanalysis
7. A Father Is Being Beaten to Death
8. Maternal Eroticism
9. Speaking in Psychoanalysis: From Symbols to Flesh and Back Again
10. Affect, That “Intense Depth of Words”
11. The Lacan Event
III. Women
12. Antigone, Limit and Horizon
13. The Passion According to Teresa of Avila
14. Beauvoir Dreams
IV. Humanism
15. A Felicity Named Rousseau
16. Speech, That Experience
17. Disability Revised: The Tragic and Chance
18. From “Critical Modernity” to “Analytical Modernity”
19. In Jerusalem: Monotheisms and Secularization and the Need to Believe
20. Dare Humanism
21. Ten Principles for Twenty-First-Century Humanism
22. On the Sanctity of Human Life
V. France, Europe, China
23. Moses, Freud, and China
24. Diversity Is My Motto
25. The French Cultural Message
VI. Positions
26. The Universal in the Singular
27. Can One Be a Muslim Woman and a Shrink?
28. One Is Born Woman, but I Become One
Notes
Index

Julia Kristeva is professor emerita of linguistics at the Université de Paris VII and author of many acclaimed works. Her Columbia University Press books include Hatred and Forgiveness (2012); The Severed Head: Capital Visions (2014); and, with Philippe Sollers, Marriage as a Fine Art (2016).

Lawrence D. Kritzman is Pat and John Rosenwald Research Professor in the Arts and Sciences and professor of French and comparative literature at Dartmouth College. He is the author of The Fabulous Imagination: On Montaigne’s Essays (2012) and editor of the Columbia History of Twentieth-Century French Thought (2006) and the Columbia University Press series European Perspectives.

Constance Borde and Sheila Malovany-Chevallier live and work in Paris, France. They are the translators of The Second Sex, by Simone de Beauvoir.