On the Legacy of Critical Theory 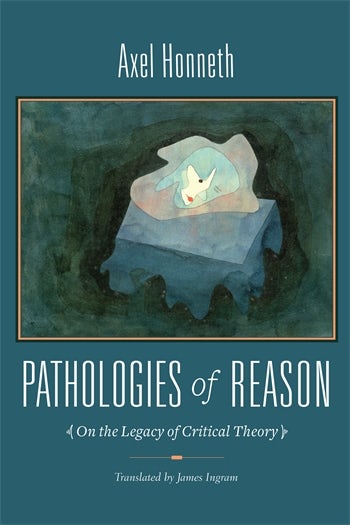 On the Legacy of Critical Theory

Axel Honneth has been instrumental in advancing the work of the Frankfurt School of critical theorists, rebuilding their effort to combine radical social and political analysis with rigorous philosophical inquiry. These eleven essays published over the past five years reclaim the relevant themes of the Frankfurt School, which counted Theodor W. Adorno, Max Horkheimer, Walter Benjamin, Jürgen Habermas, Franz Neumann, and Albrecht Wellmer as members. They also engage with Kant, Freud, Alexander Mitscherlich, and Michael Walzer, whose work on morality, history, democracy, and individuality intersects with the Frankfurt School's core concerns.

Collected here for the first time in English, Honneth's essays pursue the unifying themes and theses that support the methodologies and thematics of critical social theory, and they address the possibilities of continuing this tradition through radically changed theoretical and social conditions. According to Honneth, there is a unity that underlies critical theory's multiple approaches: the way in which reason is both distorted and furthered in contemporary capitalist society. And while much is dead in the social and psychological doctrines of critical social theory, its central inquiries remain vitally relevant.

Is social progress still possible after the horrors of the twentieth century? Does capitalism deform reason and, if so, in what respects? Can we justify the relationship between law and violence in secular terms, or is it inextricably bound to divine justice? How can we be free when we're subject to socialization in a highly complex and in many respects unfree society? For Honneth, suffering and moral struggle are departure points for a new "reconstructive" form of social criticism, one that is based solidly in the empirically grounded, interdisciplinary approach of the Frankfurt School.

"John Holt's book is an impressive work of scholarship." Journal of the Royal Asiatic Society

"This is a scholarly but eminently readable and accessible study of the multilayered resonance of Sri Lankan culture... Highly Recommended." Choice

I highly recommend it to all those interested in social justice. It offers a sophisticated, exceptionally well-crafted answer to a highly pertinent question: what social scientific criteria are there for making normative judgements about why and how Western civilization should change? Ronjon Paul Datta, Studies in Social Justice

Preface
1. The Irreducibility of Progress: Kant's Account of the Relationship Between Morality and History
2. A Social Pathology of Reason: On the Intellectual Legacy of Critical Theory
3. Reconstructive Social Criticism with a Genealogical Proviso: On the Idea of "Critique" in the Frankfurt School
4. A Physiognomy of the Capitalist Form of Life: A Sketch of Adorno's Social Theory
5. Performing Justice: Adorno's Introduction to Negative Dialectics
6. Saving the Sacred with a Philosophy of History: On Benjamin's "Critique of Violence"
7. Appropriating Freedom: Freud's Conception of Individual Self-Relation
8. "Anxiety and Politics": The Strengths and Weaknesses of Franz Neumann's Diagnosis of a Social Pathology
9. Democracy and Inner Freedom: Alexander Mitscherlich's Contribution to Critical Social Theory
10. Dissonances of Communicative Reason: Albrecht Wellmer and Critical Theory
Appendix: Idiosyncrasy as a Tool of Knowledge: Social Criticism in the Age of the Normalized Intellectual
Notes
Bibliography

Axel Honneth is professor of philosophy at the Johann Wolfgang Goethe University of Frankfurt and director of the Institute for Social Research. He is the author of The Struggle for Recognition: The Moral Grammar of Social Conflicts , Philosophical Interventions in the Unfinished Project of Enlightenment , The Critique of Power: Reflective Stages in a Critical Social Theory , and Communicative Action: Essays on Jürgen Habermas's "The Theory of Communicative Action." James Ingram is an assistant professor of political science at McMaster University. He has translated works by Reinhart Koselleck, Christoph Menke, Hauke Brunkhorst, Jacques Derrida, and Étienne Balibar, among others.