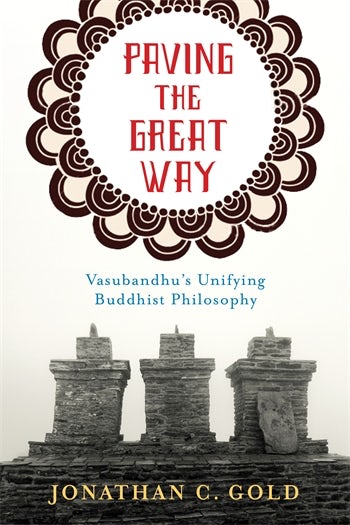 The Indian Buddhist philosopher Vasubandhu (fourth–fifth century C.E.) is known for his critical contribution to Buddhist Abhidharma thought, his turn to the Mahayana tradition, and his concise, influential Yogacara–Vijñanavada texts. Paving the Great Way reveals another dimension of his legacy: his integration of several seemingly incompatible intellectual and scriptural traditions, with far-ranging consequences for the development of Buddhist epistemology and the theorization of tantra.

Most scholars read Vasubandhu's texts in isolation and separate his intellectual development into distinct phases. Featuring close studies of Vasubandhu's Abhidharmakosabhasya, Vyakhyayukti, Vimsatika, and Trisvabhavanirdesa, among other works, this book identifies recurrent treatments of causality and scriptural interpretation that unify distinct strands of thought under a single, coherent Buddhist philosophy. In Vasubandhu's hands, the Buddha's rejection of the self as a false construction provides a framework through which to clarify problematic philosophical issues, such as the nature of moral agency and subjectivity under a broadly causal worldview. Recognizing this continuity of purpose across Vasubandhu's diverse corpus recasts the interests of the philosopher and his truly innovative vision, which influenced Buddhist thought for a millennium and continues to resonate with today's philosophical issues. An appendix includes extensive English-language translations of the major texts discussed.

Vasubandhu, one of the greatest minds in the history of Buddhism, is brought to life in these pages. Jonathan Gold's synthetic treatment of his most important ideas is a model for how to treat the work of a classical Buddhist thinker. Written in clear and lively prose, Paving the Great Way will be the definitive work on this great Buddhist philosopher for many years to come. Essential reading for anyone interested in classical Buddhist thought. José Ignacio Cabezón, University of California, Santa Barbara

Gold has done something extraordinary: he has pulled together the key philosophical strands running through Vasubandhu's works, thereby demonstrating far greater continuity than might have been suspected, and he has given us a much deeper and more compelling author as a result. This book will forever change the way we read Vasubandhu. Mark Siderits, Seoul National University

A rare example of a sustained and subtle engagement with the whole career of one of history's greatest Buddhist philosophers, Paving the Great Way makes an important and eminently readable case for thinking that the works of the prolific Buddhist thinker Vasubandhu represent the development of a unified philosophical project. Dan Arnold, University of Chicago

Paving the Great Way is a masterpiece of philosophical exposition, synthesis, and creative commentary. Gold addresses every facet of Vasubandhu's considerable and varied corpus and integrates them in his articulation of Vasubandhu's original synthesis of Buddhist ideas. Gold brings to this project great philological erudition, deep philosophical insight, scrupulous commentarial skills, and a marvelous lucidity in exposition. This book is a major contribution not only to Vasubandhu scholarship but also to Yogacara studies, the history of Indian philosophy, the history of world philosophy, and the engagement between Western and Buddhist philosophical scholarship. Jay L. Garfield, Yale–NUS College

Beautifully written and cogently argued.... A superb assessment of one of Buddhism's greatest thinkers. Buddhadharma

I am sure that students of Buddhism will use Gold's extraordinary book for a long time to come. Journal of Religion

Acknowledgments
Abbreviations
1. Summarizing Vasubandhu: Should a Buddhist Philosopher Have a Philosophy?
2. Against the Times: Vasubandhu's Critique of His Main Abhidharma Rivals
3. Merely Cause and Result: The Imagined Self and the Literalistic Mind
4. Knowledge, Language, and the Interpretation of Scripture: Vasubandhu's Opening to the Mahayana
5. Vasubandhu's Yogacara: Enshrining the Causal Line in the Three Natures
6. Agency and the Ethics of Massively Cumulative Causality
Conclusion: Buddhist Causal Framing for the Modern World
Appendix A. Against the Existence of the Three Times
Appendix B. Brief Disproof of the Self
Appendix C. Discussion of "View" (Drsti)
Appendix D. Against the Eternality of Atoms (Paramanu)
Appendix E. The Proper Mode of Exposition on Conventional and Ultimate
Appendix F. The Twenty Verses on Appearance and Memory
Appendix G. The Three Natures Exposition
Notes
Bibliography
Index

Read "Summarizing Vasubandhu: Should a Buddhist Philosopher Have a Philosophy?":

Jonathan Gold is associate professor in the Department of Religion at Princeton University and the author of The Dharma's Gatekeepers: Sakya Pandita on Buddhist Scholarship in Tibet (2007).