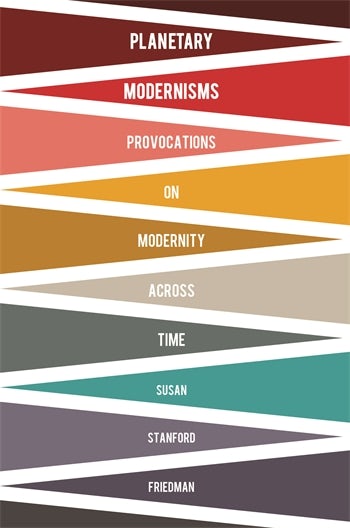 Friedman moves from large-scale instances of pre-1500 modernities, such as Tang Dynasty China and the Mongol Empire, to small-scale instances of modernisms, including the poetry of Du Fu and Kabir and Abbasid ceramic art. She maps the interconnected modernisms of the long twentieth century, pairing Joseph Conrad with Tayeb Salih, E. M. Forster with Arundhati Roy, Virginia Woolf with the Tagores, and Aimé Césaire with Theresa Hak Kyung Cha. She reads postcolonial works from Sudan and India and engages with the idea of Négritude. Rejecting the modernist concepts of marginality, othering, and major/minor, Friedman instead favors rupture, mobility, speed, networks, and divergence, elevating the agencies and creative capacities of all cultures not only in the past and present but also in the century to come.

A brave, challenging, and incredibly stimulating account of where modernist studies might go next. This book should be read and debated widely. In many ways it turns the 'new' of modernism into the 'now.' A book that emphatically, and in the very best possible way, provokes. Andrew Thacker, Nottingham Trent University, coeditor of The Oxford Handbook of Modernisms

In this bold and brilliant book, Susan Stanford Friedman calls for a radical rethinking of the spatial and historical parameters of modernism. Learned and expansive, generous and generative, formally inventive and extraordinarily exhilarating to read, Planetary Modernisms will set intellectual agendas for years to come. Rita Felski, University of Virginia, editor of New Literary History

This is one of the most exciting and consequential books of modernist scholarship in recent decades. Susan Stanford Friedman boldly crosses the boundaries between world-historical and literary scholarship, between criticism on twentieth-century and pre-1500 literature, between feminist and global scholarship, and between postcolonial and modernist studies. Passionate, provocative, and energetically argued, Planetary Modernisms will generate animated debate and fresh scholarship. Jahan Ramazani, author of A Transnational Poetics

This book is bound to spark intellectual discussion for years to come. World Literature Today

[Planetary Modernisms] brings together more than a decade of influential polemics and provocations.... Their collective arrival in book form provides a valuable occasion to revisit, reflect, and reassess. Christopher Bush, Modernism/modernity

A thought experiment that invigorates the field of modernist studies by altering its scales of time and place. Laura Winkiel, Contemporary Women's Writing

Friedman has added immeasurably to our stock of images by which modernity can be recognized and to the series of locations where it might be found. Bruce Robbins, Interventions: International Journal of Postcolonial Studies

Planetary Modernisms makes a signal contribution to the multi-disciplinary study of modernism and offers an incisive engagement with the planetary turn in the humanities and human sciences. Virginia Woolf Miscellany

Read the introdution to Planetary Modernisms:

Susan Stanford Friedman is the Virginia Woolf Professor of English and Women's Studies, the Hilldale Professor of the Humanities, and director for the Institute for Research in the Humanities at the University of Wisconsin–Madison. She is the author of Psyche Reborn: The Emergence of H.D.; Penelope's Web: Gender, Modernity; H.D.'s Fiction; and Mappings: Feminism and the Cultural Geographies of Encounter, which won the Perkins Prize for Best Book in Narrative Studies. She has edited Analyzing Freud: Letters of H.D., Bryher, and Their Circle and coedited Signets—Reading H.D.; Joyce: The Return of the Repressed; and Comparison: Theories, Approaches, Uses. Her work has been translated into Chinese, German, Hungarian, Icelandic, Italian, Japanese, Portuguese, Serbian, and Spanish.