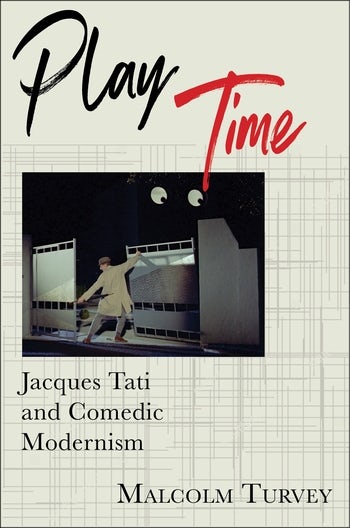 Jacques Tati is widely regarded as one of the greatest postwar European filmmakers. He made innovative and challenging comedies while achieving international box office success and attaining a devoted following. In Play Time, Malcolm Turvey examines Tati’s unique comedic style and evaluates its significance for the history of film and modernism.

Turvey argues that Tati captured elite and general audiences alike by combining a modernist aesthetic with slapstick routines, gag structures, and other established traditions of mainstream film comedy. Considering films such as Monsieur Hulot’s Holiday (1953), Mon Oncle (1958), Play Time (1967), and Trafic (1971), Turvey shows how Tati drew on the rich legacy of comic silent film while modernizing its conventions in order to encourage his viewers to adopt a playful attitude toward the modern world. Turvey also analyzes Tati’s sardonic view of the bourgeoisie and his complex and multifaceted satire of modern life. Tati's singular and enduring achievement, Turvey concludes, was to translate the democratic ideals of the postwar avant-garde into mainstream film comedy, crafting a genuinely popular modernism. Richly illustrated with images from the director’s films, Play Time offers an illuminating and original understanding of Tati’s work.

Malcolm Turvey’s exhilarating study of Jacques Tati is a precise, loving appreciation of the unique style and worldview of a great filmmaker. It’s also a history of avant-garde humor and a deep analysis of techniques of slapstick and satire. Turvey, one of our finest scholars of modernity in the arts, shows in detail how Tati’s comedy turned modernist experimentation into popular entertainment. David Bordwell, author of Reinventing Hollywood: How 1940s Filmmakers Changed Movie Storytelling

Malcolm Turvey’s Play Time is the best extended critical study of Tati I’ve encountered: persuasively argued, scrupulously observed, and beautifully illustrated. The writing is clear and graceful, and the research is impressive, especially regarding the relation of slapstick films to avant-garde movements of the early twentieth century and Tati’s critiques of modern architecture. Most critical books about Tati have been short on close analysis, but this one beats them all. Jonathan Rosenbaum, author of Cinematic Encounters: Interviews and Dialogues

Few films deserve a book-length study as much as those of Jacques Tati. Malcolm Turvey has done them justice. His explanation of their context in the slapstick and modernist traditions is fascinating. Turvey takes Tati’s work seriously, not by spoiling the fun but by respecting its extraordinary complexity. His title comes from Tati’s masterpiece. No matter how many times you have seen Play Time—and it is a film made for many viewings—Turvey will reveal something new and make you want to see it yet again. Kristin Thompson, Honorary Fellow in the Department of Communication Arts, University of Wisconsin-Madison

This book is an excellent, detailed study of the films of Jacques Tati that establishes how Tati’s work draws upon classical “comedian comedy” while also connecting with the interwar European avant-garde. Moreover, the author insightfully discusses Tati’s love/hate relationship with modernity as well as his passion for creating a participatory style in which the spectator works to find humor in his films and also in the real world. Lucy Fischer, Distinguished Professor Emerita, University of Pittsburgh

Malcolm Turvey’s Play Time is a completely joyful and entirely refreshing account of the films of Jacques Tati. It is also one of the finest, most nuanced accounts of comedic form that we have, a work that no one who studies comedy, or simply enjoys it, should be without. In tending so carefully to the structure of Tati’s gags—a seemingly infinite amount of them—Turvey does something that is as extraordinary as it is subtle. With Tati, he shows us how intelligence and popularity, structure and participation, aesthetic excellence and ordinary life, cannot be easily or gainfully opposed. Brian Price, University of Toronto

Malcolm Turvey is Sol Gittleman Professor in the Art and Art History Department and director of the Film and Media Studies Program at Tufts University. He is an editor of the journal October. His books include Doubting Vision: Film and the Revelationist Tradition (2008) and The Filming of Modern Life: European Avant-Garde Film of the 1920s (2011).