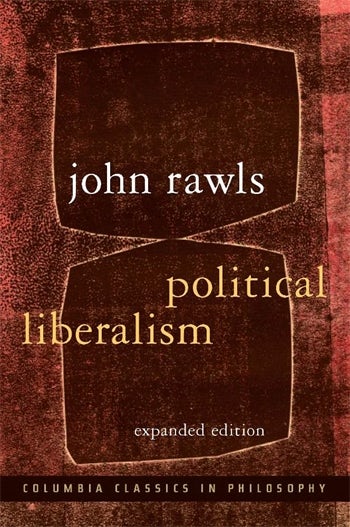 This book continues and revises the ideas of justice as fairness that John Rawls presented in A Theory of Justice but changes its philosophical interpretation in a fundamental way. That previous work assumed what Rawls calls a "well-ordered society," one that is stable and relatively homogenous in its basic moral beliefs and in which there is broad agreement about what constitutes the good life. Yet in modern democratic society a plurality of incompatible and irreconcilable doctrines—religious, philosophical, and moral—coexist within the framework of democratic institutions. Recognizing this as a permanent condition of democracy, Rawls asks how a stable and just society of free and equal citizens can live in concord when divided by reasonable but incompatible doctrines?

This edition includes the essay "The Idea of Public Reason Revisited," which outlines Rawls' plans to revise Political Liberalism, which were cut short by his death.

"An extraordinary well-reasoned commentary on A Theory of Justice...a decisive turn towards political philosophy."

—Times Literary Supplement
Introduction
Introduction to the Paperback Edition
Part I. Political Liberalism: Basic Elements
Lecture I. Fundamental Ideas
Addressing Two Fundamental Questions
The Idea of a Political Conception of Justice
The Idea of Society as a Fair System of Cooperation
The Idea of the Original Position
The Political Conception of the Person
The Idea of a Well-Ordered Society
Neither a Community nor an Association
The Use of Abstract Conceptions
Lecture II. The Powers of Citizens and Their Representation
The Reasonable and the Rational
The Burdens of Judgement
Reasonable Comprehensive Doctrines
The Publicity Condition: Its Three Levels
Rational Autonomy: Artificial not Political
Full Autonomy: Political not Ethical
The Basis of Motivation in the Person
Moral Psychology: Philosophical not Psychological
Lecture III. Political Constructivism
The Idea of a Constructivist Conception
Kant's Moral Constructivism
Justice as Fairness as a Constructivist View
The Role of Conceptions of Society and Person
Three Conceptions of Objectivity
Objectivity Independent of the Casual View of Knowledge
When Do Objective Reasons Exist, Politically Speaking?
The Scope of Political Constructivism
Part II. Political Liberalism: Three Main Ideas
Lecture IV. The Idea of an Overlapping Consensus
How is Political Liberalism Possible?
The Question of Stability
Three Features of an Overlapping Consensus
An Overlapping Consensus not Indifferent or Skeptical
A Political Conception Need Not Be Comprehensive
Steps to Constitutional Consensus
Steps to Overlapping Consensus
Conception and Doctrines: How Related
Lecture V. Priority of Right and Ideas of the Good
How a Political Conception Limits Conceptions of the Good
Goodness as Rationality
Primary Goods and Interpersonal Comparisons
Primary Goods as Citizens' Need
Permissible Conceptions of the Good and Political Virtues
Is Justice as Fairness Fair to Conceptions of the Good?
The Good of Political Society
That Justice as Fairness is Complete
Lecture VI. The Idea of Public Reason
The Question and Forums of Public Right
Public Reason and the Ideal of Democratic Citizenship
Nonpublic Reasons
The Content of Public Reason
The Ideal of Constitutional Essentials
The Supreme Court as Exemplar of Public Reason
Apparent Difficulties with Public Reason
The Limits of Public Reason
Part III. Institutional Framework
Lecture VII.The Basic Structure as Subject
First Subject of Justice
Unity by Appropriate Sequence
Libertarianism Has No Special Role for the Basic Structure
The Importance of Background Justice
How the Basic Structure Affects Individuals
Initial Agreement as Hypothetical and Nonhistorical
Special Features of the Initial Agreement
The Social Nature of Human Relationships
Ideal Form for the Basic Structure
Reply to Hegel's Criticism
Lecture VIII. The Basic Liberties and Their Priority
The Initial Aim of Justice as Fairness
The Special Status of Basic Liberties
Conceptions of Person and Social Cooperation
The Original Position
Priority of Liberties, I: Second Moral Power
Priority of Liberties, II: First Moral Power
Basic Liberties not Merely Formal
A Fully Adequate Scheme of Basic Liberties
How Liberties Fit into One Coherent Scheme
Free Political Speech
The Clear and Present Danger Rule
Maintaining the Fair Value of Political Liberties
Liberties Connected with the Second Principle
The Role of Justice as Fairness
Lecture IX. Reply to Habermas
Two Main Differences
Overlapping Consensus and Justification
Liberties of the Moderns Versus the Will of the People
The Roots of the Liberties
Procedural Versus Substantive Justice
Conclusion

The late John Rawls was professor emeritus of philosophy at Harvard University. His other books include The Law of Peoples with "The Idea of Public Reason Revisited" and Justice as Fairness: A Restatement. Martha Nussbaum is Ernest Freund Distinguished Professor of Law and Ethics at the University of Chicago. She is the author of many books, including Sex and Social Justice, Love's Knowledge, and Hiding from Humanity.