Responding to Predicaments of Power 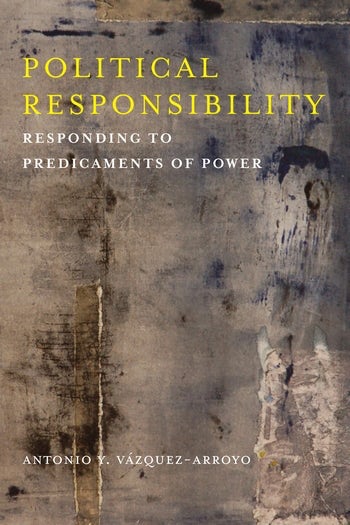 Responding to Predicaments of Power

Scholars in the humanities and social sciences have turned to ethics to theorize politics in what seems to be an increasingly depoliticized age. Yet the move toward ethics has obscured the ongoing value of political responsibility and the vibrant life it represents as an effective response to power.

Sounding the alarm for those who care about robust forms of civic engagement, this book fights for a new conception of political responsibility that meets the challenges of today's democratic practice. Antonio Y. Vázquez-Arroyo forcefully argues against the notion that modern predicaments of power can only be addressed ethically or philosophically through pristine concepts that operate outside of the political realm. By returning to the political, the individual is reintroduced to the binding principles of participatory democracy and the burdens of acting and thinking as a member of a collective. Vázquez-Arroyo historicizes the ethical turn to better understand its ascendence and reworks Adorno's dialectic of responsibility to reassert the political in contemporary thought and theory.

What is a distinctly political ethic, one responsive to the unique properties of action and power in setting the terms of collective life? What is a radical democratic ethic, one contoured to substantive equality and power sharing? In this original study, Antonio Y. Vázquez-Arroyo probes every dimension of these timely questions. By turns exquisitely subtle and ardently polemical, Political Responsibility restores political theory's promise of worldly illumination. Wendy Brown, University of California, Berkeley

Remarkably erudite and conceptually lucid, Political Responsibility scrutinizes the complex relationship that, from Machiavelli to Adorno, binds ethics with politics. Antonio Y. Vázquez-Arroyo unveils the upshots of the 'ethical turn' that has shaped the humanities in the last decades: a depoliticized fetishism of human rights combined with the actual accommodation to the individualistic ethos of neoliberalism. His plea for a political responsibility rooted on commonality and oriented towards collective action is as convincing as it is refreshing. Enzo Traverso, Cornell University

A sweeping work of integrative intellectual history, Political Responsibility is a major book in every sense—in the topic it takes on, in its range of reference, and above all in its ambition. It is certain to be a reference point for those debating the future of the field. James Ingram, McMaster University

Political Responsibility provides us with a conceptual vocabulary to discern the differences between these two projects, but their historical co-emergence in the aftermath of socialism requires further reflection. Adom Getachew, Theory & Event

Antonio Y. Vázquez-Arroyo is an assistant professor in the Department of Political Science at Rutgers University-Newark.