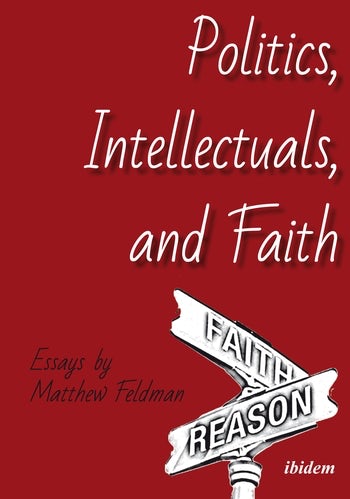 This wide-ranging collection of academic essays examines the various undertakings by modern intellectuals and ideologues in the process of propaganda and political debate. Matthew Feldman calls attention to the substantial role played in post-Great War Europe and the US by religions—both familiar monotheisms like Christianity and secular ‘political faiths’—over the last century of upheaval and revolutionary change. While the first part considers Ezra Pound as a case study in fascist ʼconversion’ in Mussolini’s Italy, leading to extensive propaganda, the second half examines other fascist ideologues like Martin Heidegger to fascist murderer Anders Behring Breivik, before turning to other leading ideologies in modern Europe and the US, communism and liberalism, covering key figures from Thomas Merton and Albert Camus to the Russian Constructionists and Samuel Beckett, with especial focus on the subjects of modern warfare, political terrorism, and genocide, ranging from Stalinist gulags to the war in Iraq.

With thought-provoking discussion of the interplay between belief and modern politics as understood by familiar intellectual voices, this volume will be of interest to scholars and general readers alike.

We all know Kafka’s letter about the effect books should exert: 'If the book we're reading doesn't wake us up with a blow to the head, what are we reading for?' This question underpins Matthew Feldman’s ethical rigor. With a slap in the face or a blow to the head, Politics, Ideology, and Faith reminds us of the need to reopen old and new archives so as to assess key texts of modernism and recent acts of terrorism. One needs to examine to what degree they have been tainted by fascism, denial, totalitarianism, and intolerance. There is a lot to learn from these courageous explorations of the darker sides of our modern and contemporary culture. Professor Jean-Michel Rabaté, University of Pennsylvania, American Academy of the Arts and Sciences

To turn one of Ezra Pound’s best-known phrases against him, far-right thinking is bad news that stays news. Matthew Feldman’s timely essays tenaciously pursue the disseminators of that news, from Pound himself, whose influence is tracked in neo-fascisms since World War II, on into a darkly troubling series of topics that include Heidegger’s Nazism and Holocaust denial, lone-wolf terrorism, and 'Just War' in Iraq. Professor Peter Nicholls, New York University

For the past decade, Matthew Feldman has been revealing the underbelly of 20th and 21st Century authoritarian political movements, from the Fascism of Ezra Pound, Martin Heidegger, and other European thinkers, to Stalinism, to Donald Trump’s assault on democracy in the US.  This new collection of Feldman’s astonishingly comprehensive archival essays also includes one of the best pieces to date on the anti-authoritarian politics of Samuel Beckett.  This is a major work by an outstanding historian. Marjorie Perloff

Matthew Feldman has been a transformative scholarly force in a number of intellectual fields—radical right political history, modern religious history, modernist literary studies—and forged links between these fields in illuminating and provocative ways. This volume is a showcase for these intellectual interventions, marked by Feldman’s characteristic insight, clarity and brio. Building on Feldman’s previous powerful study of Ezra Pound’s fascist beliefs, the first half of the collection uses the example of Ezra Pound to open up the history of Italian fascism, shedding new light on the political, social, and cultural operations of radical right ideology in the early twentieth century. Feldman shows how small a step it could be at the time from the formal operations of modernist art to the mechanics of propaganda. The volume then opens out in the second half to offer a series of revealing critiques of the beliefs, religious and political, that underpinned the work of leading figures of European thought and art. Finally, it also offers purer political history: piercing reflections on warfare, terrorism, and genocide as they have manifested themselves in recent decades. Feldman exposes both the new guises that warfare and terrorism have taken, and the old ideological and political arguments that have resurfaced in defending or responding to them. These pieces are distinctly and deliberately essayistic: written in the white heat of conviction and dedicated to exposition and exposé. They offer a disquieting snapshot of the twentieth and twenty-first century, but the troubling ideological zeal that they uncover is met with an equal and answering zeal for truth and understanding that leaves the reader, finally, galvanized rather than downcast. Dr Elizabeth Barry, University of Warwick

A collection of essays covering almost two decades of research, reflection, and indeed ‘falsifiable’ thinking, by the same scholar is a fascinating record of discovery—of the multiple layers of the subject and of the sophisticated methodological apparatus required to grasp its complexity. Individually, the essays offer compelling perspectives on ideas, methods, and context in Pound studies. But as a whole, they are like valuable fragments and mementos that cohere into a fascinating journey of two halves. One involves Feldman the literary critic, ploughing his way through various texts by and on Pound—a journey of discovering Pound as author. The other involves Feldman the historian, plotting his ever-expanding analytic horizon from within the labyrinth of archives and the accumulating pages and references—a journey of uncovering Pound outside the text. How these two halves have interfaced and enhanced each other in the course of all these years is the most generous reward the reader can get from this collection. Professor Aristotle Kallis, Keele University

Feldman's essays on the radical right are particularly important. In an era when far too many journalists and a surprising number of academics refuse to take their ideas seriously, Feldman reminds us just how those ideas actually matter. The intellectuals he surveys hardly need to read off the same page for their words to have a frightful power; for anyone interested in the dark ideologies that motivate a politics that shows no signs of abating, these essays are an indispensable contribution. Dr Richard Steigmann-Gall, Kent State University

This is a remarkably wide-ranging collection of essays, principally focussed on the individuals and movements which have provided most of the ideological inspiration of present-day radical right-wing right movements: Part II also includes very penetrating analyses of both Soviet totalitarianism, and the international war policy of the USA between 1960 and 2018.

Feldman’s collection makes a most valuable contribution to our understanding of the ideological origins of present-day radical right movements, in particular, the influence of Ezra Pound. His careful documentary analysis of Pound’s behaviour, both during his incarceration in the St Elizabeth’s mental home (1945-1958) and after, conclusively demonstrates that Pound never abjured his racist, anti-Semitic or fascist views. Fittingly, Feldman, along with Anna Castriota, also dissects the ideology and policies of Ezra Pound’s most lasting ‘memorial’, apart from his poetry, the Italian, neo-Fascist CasaPound organisation. That analysis is absolutely essential reading for an understanding of what is undoubtedly Italy’s most dynamic fascist movement today. In addition, his dissection of the influence of Heidegger, his essays on Holocaust Denial and on ‘lone wolf terrorism’, one of the most debated issues among commentators on the radical right, and his fascinating appraisal of the full enormity of Anders Breivik’s terrorism, are extremely illuminating. Professor John Pollard, University of Cambridge

Professor Matthew Feldman is a specialist on fascist ideology and the far-right in Europe and the USA. He is the author or editor of more than 20 books, including three book-length studies, and more than 40 articles or academic book chapters.