Hollywood Auteurs and the Corporate Counterculture 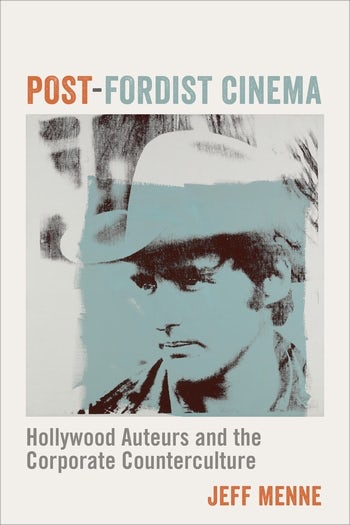 Hollywood Auteurs and the Corporate Counterculture

The New Hollywood boom of the late 1960s and 1970s is celebrated as a time when maverick directors bucked the system. Against the backdrop of counterculture sensibilities and the prominence of auteur theory, New Hollywood directors such as Robert Altman and Francis Ford Coppola seemed to embody creative individualism. In Post-Fordist Cinema, Jeff Menne rewrites the history of this period, arguing that auteur theory served to reconcile directors to Hollywood’s corporate project.

Menne traces the surprising affinities between auteur theory and management gurus such as Peter Drucker, who envisioned a more open and flexible corporate style. In founding production companies, New Hollywood filmmakers took part in the creation of new corporate models that emphasized entrepreneurial creativity. For firms such as Kirk Douglas’s Bryna Productions, Altman’s Lion’s Gate Films, the Zanuck-Brown Company, and BBS Productions, the counterculture ethos limbered up the studio system’s sclerotic production process—with striking parallels to how management theory conceived of the role of the individual within the firm. Menne offers insightful readings of how films such as Lonely Are the Brave, Brewster McCloud, Jaws, and The King of Marvin Gardens narrate the conditions in which they were created, depicting shifting notions of work and corporate structure. While auteur theory allowed directors to cast themselves as independent creators, Menne argues that its most consequential impact came as a management doctrine. An ambitious rethinking of New Hollywood, Post-Fordist Cinema sheds new light on the cultural myth of the great director and the birth of the “creative economy.”

Menne links the development of the auteur theory in the U.S. and its enactment in the filmmaking practices of the New Hollywood to the rise of the “management revolution” of the postwar period. In Menne’s telling, New Hollywood auteurs—and their small production companies—at once instantiate the practices of this management revolution while also offering allegories for it in the films they make. This salient and persuasive book connects these arguments to case studies of small production companies, demonstrating how these entities enabled new forms of creative labor that were nonetheless compatible with the larger corporations that took over the studios at this time. Derek Nystrom, author of Hard Hats, Rednecks, and Macho Men: Class in 1970s American Cinema

Menne has produced a masterful study in which close readings of key films of the post-studio era are informed by an understanding of large-scale socioeconomic trends and evolving institutional arrangements. Deeply researched and carefully argued, Post-Fordist Cinema represents a new and promising direction for the field. Virginia Wright Wexman, author of Creating the Couple: Love, Marriage, and Hollywood Performance

Post-Fordist Cinema rewrites the standard narrative of New Hollywood. Joining the dots between auteurism, corporate management theory, and the counterculture, Menne shows how innovative small firms played a pivotal role in the emergence of New Hollywood and the rise of the “cultural economy.” Packed with bravura close readings and rigorous industrial history, this is an outstanding contribution to the scholarship on 1960s and 1970s cinema. Lawrence Webb, author of The Cinema of Urban Crisis: Seventies Film and the Reinvention of the City

Jeff Menne has made a crucial contribution to our understanding of postclassical Hollywood. Examining the films and filmmaking of small “outsider” firms run by a range of savvy industry players – from star Kirk Douglas to producers Richard Zanuck and David Brown to renegade director Robert Altman – Post-Fordist Cinema gauges the economic logic, innovative aesthetics and revisionist auteurism of the nascent New Hollywood. Thomas Schatz, author of The Genius of the System: Hollywood Filmmaking in the Studio Era

Menne’s book offers not only a history of the "new Hollywood” of the late 1960s and early 1970s, but also a deft examination of what was lost and what was gained as filmmaking dealt with television and the loss of a theater audience. Choice

Jeff Menne is associate professor and program director of screen studies at Oklahoma State University. He is the author of Francis Ford Coppola (2015).