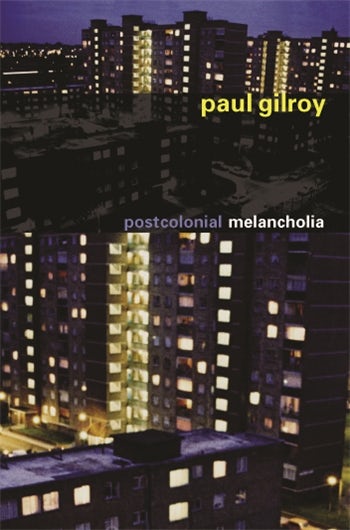 In an effort to deny the ongoing effect of colonialism and imperialism on contemporary political life, the death knell for a multicultural society has been sounded from all sides. That's the provocative argument Paul Gilroy makes in this unorthodox defense of the multiculture. Gilroy's searing analyses of race, politics, and culture have always remained attentive to the material conditions of black people and the ways in which blacks have defaced the "clean edifice of white supremacy." In Postcolonial Melancholia, he continues the conversation he began in the landmark study of race and nation 'There Ain't No Black in the Union Jack' by once again departing from conventional wisdom to examine—and defend—multiculturalism within the context of the post-9/11 "politics of security."

This book adapts the concept of melancholia from its Freudian origins and applies it not to individual grief but to the social pathology of neoimperialist politics. The melancholic reactions that have obstructed the process of working through the legacy of colonialism are implicated not only in hostility and violence directed at blacks, immigrants, and aliens but in an inability to value the ordinary, unruly multiculture that has evolved organically and unnoticed in urban centers. Drawing on the seminal discussions of race begun by Frantz Fanon, W. E. B. DuBois, and George Orwell, Gilroy crafts a nuanced argument with far-reaching implications. Ultimately, Postcolonial Melancholia goes beyond the idea of mere tolerance to propose that it is possible to celebrate the multiculture and live with otherness without becoming anxious, fearful, or violent.

This analysis holds an important lesson for the increasingly imperial United States: otherness is nothing to fear, especially in our age of terror. R. Owen Williams, Black Issues Book Review

Introduction. On Living with Difference
Part One: The Planet
1. Race and the Right to Be Human
2. Cosmopolitanism Contested
Part Two: Albion
3. Has It Come to This?
4. The Negative Dialectics of Conviviality

Paul Gilroy is the Anthony Giddens Professor of Social Theory at the London School of Economics.