Historicity and Hope in James, Dewey, and Rorty 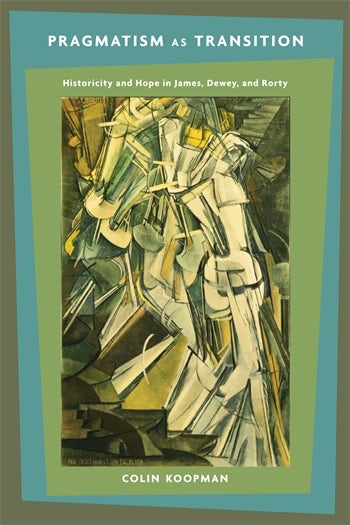 Historicity and Hope in James, Dewey, and Rorty

Pragmatism is America's best-known native philosophy. It espouses a practical set of beliefs and principles that focus on the improvement of our lives. Yet the split between classical and contemporary pragmatists has divided the tradition against itself. Classical pragmatists, such as John Dewey and William James, believed we should heed the lessons of experience. Neopragmatists, including Richard Rorty, Hilary Putnam, and Jürgen Habermas, argue instead from the perspective of a linguistic turn, which makes little use of the idea of experience. Can these two camps be reconciled in a way that revitalizes a critical tradition?

Colin Koopman proposes a recovery of pragmatism by way of "transitionalist" themes of temporality and historicity which flourish in the work of the early pragmatists and continue in contemporary neopragmatist thought. "Life is in the transitions," James once wrote, and, in following this assertion, Koopman reveals the continuities uniting both phases of pragmatism. Koopman's framework also draws from other contemporary theorists, including Michel Foucault, Pierre Bourdieu, Bernard Williams, and Stanley Cavell. By reflecting these voices through the prism of transitionalism, a new understanding of knowledge, ethics, politics, and critique takes root. Koopman concludes with a call for integrating Dewey and Foucault into a model of inquiry he calls genealogical pragmatism, a mutually informative critique that further joins the analytic and continental schools.

This may be the best general book about pragmatism in a decade... essential Choice

Pragmatism as Transition is one of those rare books that sets our thinking on a new track. Exhaustively researched, the book not only cuts through facile readings of pragmatism that deny to us its transformative possibilities, but the book wonderfully teases out pragmatism's perfectionist core that enables a more capacious political and ethical life. This is a significant contribution, especially to those interested in the creative work pragmatism makes possible. Bravo! Melvin L. Rogers, author of The Undiscovered Dewey: Religion, Morality, and the Ethos of Democracy

Koopman's [Pragmatism as Transition] is surely an interesting book that pushes the fringes of the pragmatist tradition a bit further. European Journal of Pragmatism and American Philosophy

Clear, insightful, and ambitious... the book is exemplary in the best Emersonian sense. Metaphilosophy

Well-written and valuable for students of American pragmatism. Foucault Studies

Colin Koopman is associate professor of philosophy at the University of Oregon and author of Genealogy as Critique: Foucault and the Problems of Modernity.