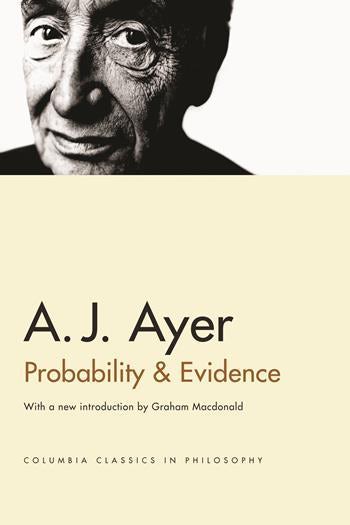 A. J. Ayer was one of the foremost analytical philosophers of the twentieth century, and was known as a brilliant and engaging speaker. In essays based on his influential Dewey Lectures, Ayer addresses some of the most critical and controversial questions in epistemology and the philosophy of science, examining the nature of inductive reasoning and grappling with the issues that most concerned him as a philosopher. This edition contains revised and expanded versions of the lectures and two additional essays.

Ayer begins by considering Hume's formulation of the problem of induction and then explores the inferences on which we base our beliefs in factual matters. In other essays, he defines the three kinds of probability that inform inductive reasoning and examines the various criteria for verifiability and falsifiability. In his extensive introduction, Graham Macdonald discusses the arguments in Probability and Evidence, how they relate to Ayer's other works, and their influence in contemporary philosophy. He also provides a brief biographical sketch of Ayer, and includes a bibliography of works about and in response to Probability and Evidence.

A. J. Ayer was the Wykeham Professor of Logic at the University of Oxford. His other books include Language, Truth, and Logic and Logical Positivism.Graham Macdonald is professor of philosophy at the University of Canterbury, Christchurch, New Zealand. Among other publications, he is the editor of Perception and Identity: Essays Presented to A. J. Ayer with His Replies.