Demonstrations, Riots, and Petitions in the Mid-Qing Dynasty 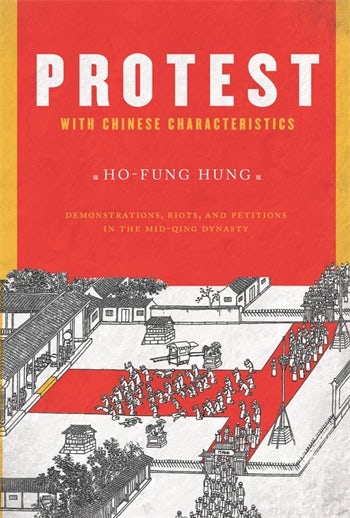 Demonstrations, Riots, and Petitions in the Mid-Qing Dynasty

The origin of political modernity has long been tied to the Western history of protest and revolution, the currents of which many believe sparked popular dissent worldwide. Reviewing nearly one thousand instances of protest in China from the eighteenth to the early-nineteenth centuries, Ho-fung Hung charts an evolution of Chinese dissent that stands apart from Western trends.

Hung samples from mid-Qing petitions and humble plaints to the emperor. He revisits rallies, riots, market strikes, and other forms of contention rarely considered in previous studies. Drawing on new world history, which accommodates parallels and divergences between political-economic and cultural developments East and West, Hung shows how the centralization of political power and an expanding market, coupled with a persistent Confucianist orthodoxy, shaped protesters' strategies and appeals in Qing China.

This unique form of mid-Qing protest combined a quest for justice and autonomy with a filial-loyal respect for the imperial center, and Hung's careful research ties this distinct characteristic to popular protest in China today. As Hung makes clear, the nature of these protests prove late imperial China was anything but a stagnant and tranquil empire before the West cracked it open. In fact, the origins of modern popular politics in China predate the 1911 Revolution. Hung's work ultimately establishes a framework others can use to compare popular protest among different cultural fabrics. His book fundamentally recasts the evolution of such acts worldwide.

This is an excellent book, carefully researched, well argued, and well written, and it makes important contributions to the field. Protest with Chinese Characteristics is original and theoretically provocative, and I am not aware of any other book that has done the same work. Guobin Yang, Barnard College, Columbia University, author of The Power of the Internet in China: Citizen Activism Online

Ho-fung Hung's book is for early modern China what Charles Tilly's Vendee was for early modern Francea pathbreaking, quantitative study of political protest and the social conditions behind it. Hung demonstrates that the evolution of popular protest in China did not simply recapitulate that of Western Europe; his detailed archival research shows that Chinese society for centuries wrestled with its own unique concepts of state/market and peasant/worker/state relationships, independent of Western influence. This landmark study will change the way we view protest in China, from imperial times to the present day. Jack A. Goldstone, Hazel Professor of Public Policy, George Mason University

Ambitious, informative, and stimulating, this study deserves to be widely read. Summing Up: Essential. Choice

An excellent example of systematic historical social science. There is much to like in the book—its theoretical clarity, novel evidence, and transparent methodology—but the main contribution lies in Hung's extension and reworking of prior work on early modern European contention to the Chinese case. Colin Beck, American Journal of Sociology

After reading this thought-provoking book, readers will have a better understanding of how Chinese popular movements can usefully be compared with their counterparts in non-China contexts. Wensheng Wang, China Journal

There is much to admire in this book. The profiles of protest are interesting and lively... American Historical Review

This book has been written with utmost candour and clarity, which makes it immensely readable. Arnab Roy Chowdhury, International Sociology

This is historical sociology done at a particularly high level of both historical and sociological rigor. Daniel Little, Contemporary Sociology

Hung's clear articulation of protest cycles in eighteenth- and nineteenth-century China demands the attention of scholars interested in specific episodes of rebellion and resistance in this period as well as scholars of Qing political economy. Journal of Asian Studies

Ho-fung Hung is associate professor of sociology at the Johns Hopkins University and the editor of China and the Transformation of Global Capitalism.