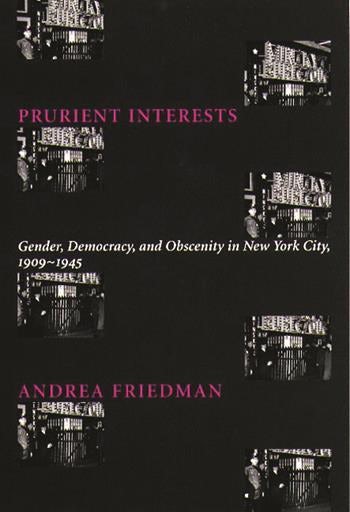 Debate about what constitutes obscenity and how—if at all—it should be regulated has been at the center of the "culture wars" of the past two decades. While literature abounds on the contemporary politics of obscenity, there has been little inquiry into the historic origins of these issues. Focusing on New York City in the first half of the twentieth century, Andrea Friedman's Prurient Interests considers the ways in which the evolution of obscenity debates in decades past has significantly affected today's controversies.

Exploring motion pictures, burlesque, and Broadway theater—three forms of entertainment that were regularly condemned by anti-obscenity activists in the early 1900s—Friedman traces the creation of a modern system of obscenity regulation in New York City. Friedman also shows how the rise of the concept of "democratic moral authority"—the idea that obscenity should be regulated according to the standards of the "average person" and that the mechanisms of regulation should themselves be controlled by the people—displaced middle-class women as anti-obscenity crusaders. At the same time, it offered inroads to male religious figures who were able to portray themselves as representatives of the people.

As Prurient Interests vividly illustrates, many of the elemental arguments that censorship advocates still employ today were first delineated in this period: the capacity of certain forms of entertainment to encourage violence against women, to corrupt the minds of young audiences, and to spread homosexuality. Friedman's innovative study enriches our understanding of the obscenity debates still raging at the close of the millennium.

The intrictae tapestry of social, sexual, political, moral, economic, and myriad other variables that in no small way comprise the censorship quandaries of our own time is greatly illuminated as a result of Friedman's scholarship. Theater Journal

By providing a historical, intellectual and cultural lineage, [Friedman] is able to clarify contemporary debates about regulation and cultural authority. Equally important is the study's relevance to the New York question: how can consensus be achieved in a city with so many competing voices? That Friedman is able to reexamine such a familiar question within new parameters is an achievement in itself. Richard Haw, American Studies