Psychology of a Superpower 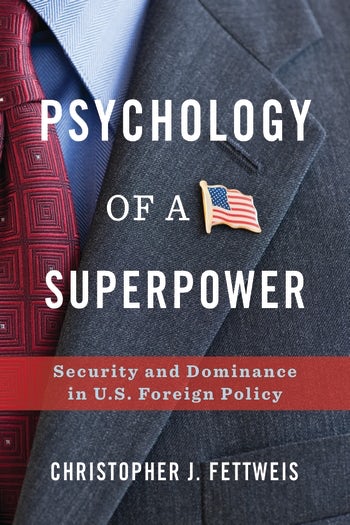 Psychology of a Superpower

With the collapse of the Soviet Union, the United States was left as the world’s sole superpower, which was the dawn of an international order known as unipolarity. The ramifications of imbalanced power extend around the globe—including the country at the center. What has the sudden realization that it stands alone atop the international hierarchy done to the United States? In Psychology of a Superpower, Christopher J. Fettweis examines how unipolarity affects the way U.S. leaders conceive of their role, make strategy, and perceive America’s place in the world.

Combining security, strategy, and psychology, Fettweis investigates how the idea of being number one affects the decision making of America’s foreign-policy elite. He examines the role the United States plays in providing global common goods, such as peace and security; the effect of the Cold War’s end on nuclear-weapon strategy and policy; the psychological consequences of unbalanced power; and the grand strategies that have emerged in unipolarity. Drawing on psychology’s insights into the psychological and behavioral consequences of unchecked power, Fettweis brings new insight to political science’s policy-analysis toolkit. He also considers the prospect of the end of unipolarity, offering a challenge to widely held perceptions of American indispensability and asking whether the unipolar moment is worth trying to save. Psychology of a Superpower is a provocative rethinking of the risks and opportunities of the global position of the United States, with significant consequences for U.S. strategy, character, and identity.

Is the United States really the indispensable nation? Has it imposed a Pax Americana on the world? Is it threatened by ISIS, Iran, immigrants, or artificial islands in the South China Sea? These ideas are common among foreign-policy experts, but they have remarkably little evidence behind them. With wit, balance, and a trove of insight from psychological science, Christopher Fettweis diagnoses the current state of America and the world, and presents a picture with a far better resemblance to reality. Steven Pinker, Harvard University and author of The Better Angels of Our Nature: The Case for Reason, Science, Humanism, and Progress

Fettweis weaves together a wide range of findings from cognitive and social psychology and some of the newer work in neuroscience to make the case for systematic biases arising from the perception of a unique position of power in the international system. He demonstrates how psychology, and the more specialized field of political psychology, can help us gain leverage over the questions he asks. James Davis, University of St. Gallen

“At the summit of foreign policy,” an analyst once noted, “one always finds simplicity and spook.” In this engaging, provocative, and highly readable book, Christopher Fettweis validates that observation. Extensively applying insights from psychology, he finds that, to a considerable degree, American arrogance, self-infatuation, insensitivity to others, threat exaggeration, and illusions about its capacities, indispensability, and essential benevolence derive from the fact that it is (or thinks itself to be) number one. John Mueller, Ohio State University and the Cato Institute

Creatively applying research on cognition and perception to the structural condition of US material preeminence in the international system, Fettweis advances novel arguments about how unipolarity warps US threat perception and hamstrings strategy. Psychology of a Superpower is a bracing intervention in the unipolarity debate. William Wohlforth, Dartmouth College

Interesting and insightful. . . . This is not a traditional international relations book. Fettweis does not develop a central theory or test hypotheses with systematic data. But he provides a thoughtful meditation on how the possession of great power may warp U.S. threat perception, lead U.S. grand strategy astray, and stiffen foreign resistance to U.S. foreign policy. It should be read by scholars and policymakers alike. Michael Beckley, Politcal Science Quarterly

At a time when the U.S. role in the world is influx, Psychology of a Superpower provides rich insights into the perils and pitfalls of decision-making under the influence of power. Ethics & International Affairs

Christopher J. Fettweis is associate professor of political science at Tulane University in New Orleans. He is the author of Losing Hurts Twice as Bad: The Four Stages to Moving Beyond Iraq (2008); Dangerous Times? The International Politics of Great Power Peace (2010); and The Pathologies of Power: Fear, Honor, Glory, and Hubris in U.S. Foreign Policy (2013).