Life, Death, and Desire in the Settler Colony 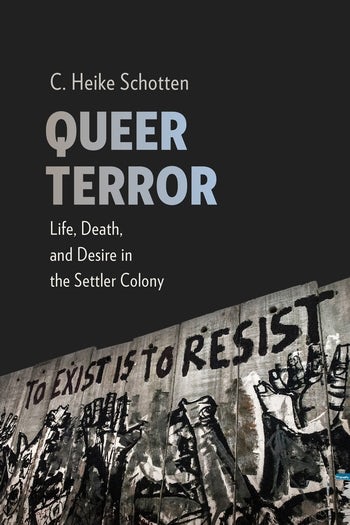 Life, Death, and Desire in the Settler Colony

After Sept. 11, 2001, George W. Bush declared, “Either you are with us, or you are with the terrorists.” Bush’s assertion was not simply jingoist bravado—it encapsulates the civilizationalist moralism that has motivated and defined the United States since its beginning, linking the War on Terror to the nation’s settlement and founding.

In Queer Terror, C. Heike Schotten offers a critique of U.S. settler-colonial empire that draws on political, queer, and critical indigenous theory to situate Bush’s either/or moralism and reframe the concept of terrorism. The categories of the War on Terror exemplify the moralizing politics that insulate U.S. empire from critique, render its victims deserving of its abuses, and delegitimize resistance to it as unthinkable and perverse. Schotten provides an anatomy of this moralism, arguing for a new interpretation of biopolitics that is focused on sovereignty and desire rather than racism and biology. This rethinking of biopolitics puts critical political theory of empire in dialogue with the insights of both native studies and queer theory. Building on queer theory’s refusal of sanctity, propriety, and moralisms of all sorts, Schotten ultimately contends that the answer to Bush’s ultimatum is clear: dissidents must reject the false choice he presents and stand decisively against “us,” rejecting its moralism and the sanctity of its “life,” in order to further a truly emancipatory, decolonizing queer politics.

In this brilliantly iconoclastic tractate, Schotten poses the question of empire's desire. She returns, spectacularly, to Hobbes to disclose what we can no longer ignore: the settler colony has a moralizing hold on life itself, on time, and on desire. Schotten counters this 'punitive sanctimony' and its constitutive despair by offering uncompromising readings of Arendt and Edelman, deep reflections on native studies and on Islamophobia, and a remarkable genealogy of 'terrorism.' Throughout, she demonstrates, indeed, heightens, the urgency and significance of a queer political theory. This is a striking and original book, a stirring and energizing call for dissidence and liberation. Gil Anidjar, Columbia University

Queer Terror aims to bring together political theory and queer theory, and in this is very successful. It is extremely well argued and well written, defending an original and distinctive position that will be of interest to a wide range of radical scholars. Every few pages there is a jewel of an idea! The scholarship is excellent: texts are read carefully and deeply, while close readings are contextualized in larger literatures. The juxtaposition of political theory, queer theory, and decolonial theory is something we’ve been waiting for. Cressida Heyes, former Canada Research Chair in Philosophy of Gender and Sexuality, University of Alberta

Queer Terror provides one of the best genealogies of the war on terror I have ever read. By reconceptualizing biopower, Queer Terror insightfully reveals how Zionism, Islamophobia, and the war on terror have their origins in settler-colonial hatred of the 'savage.' Scholars and activists urgently need this book for its bold and brilliant map of U.S./Israeli empire as well as the radical queer possibilities for decolonization it inspires. Nadine Suleiman Naber, University of Illinois at Chicago

C. Heike Schotten's Queer Terror masterfully synthesizes queer theory, political theory, settler-colonial studies, and native studies to explore the connection between the production of the 'savage' and 'terrorist' in settler colonial and imperial logics. In this innovative work, Schotten shows that what links them is a 'civilizational moralism of life and death' in which the biopolitical production of the indigenous and Islamic 'other' as the fundamental 'antagonists to life itself' is necessary for asserting the 'goodness and rationality' of settler sovereignty and U.S. empire. Through sophisticated readings of such thinkers as Michel Foucault, Thomas Hobbes, and Lee Edelman, Schotten makes the case that in this biopolitical context the radical, queer imperative is to refuse settler moralism by refusing the notion that the settler polity must survive. It means, given the choice set before us by settler sovereignty, to take the 'side of terrorism.' Kevin Bruyneel, author of The Third Space of Sovereignty: The Postcolonial Politics of U.S.-Indigenous Relations

An urgent and provocative book that is indispensable reading for anyone seeking a better understanding of terrorism, the War on Terror, Islamophobia, settler colonialism and empire, Thomas Hobbes, the liberatory potential of queer critique, and the relationship between these. Verena Erlenbusch-Anderson, Perspectives on Politics

Acknowledgments
Introduction
1. The Biopolitics of Empire: Slavery and “the Muslim”
2. The Biopolitics of Settlement: Temporality, Desire, and Civilization
3. Foucault and Queer Theory
4. Society Must Be Destroyed
5. Queer Terror
Notes
Bibliography
Index

Read the introduction of QUEER TERROR: LIFE, DEATH, AND DESIRE IN THE SETTLER COLONY, by C. Heike Schotten.

C. Heike Schotten is associate professor of political science at the University of Massachusetts Boston. She is the author of Nietzsche’s Revolution: Décadence, Politics, and Sexuality (2009).