Queer Theory and the Jewish Question 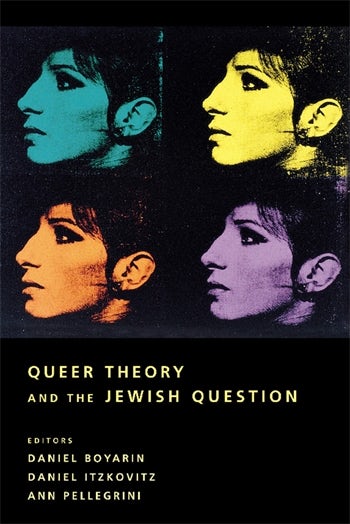 Queer Theory and the Jewish Question

The essays in this volume boldly map the historically resonant intersections between Jewishness and queerness, between homophobia and anti-Semitism, and between queer theory and theorizations of Jewishness. With important essays by such well-known figures in queer and gender studies as Judith Butler, Daniel Boyarin, Marjorie Garber, Michael Moon, and Eve Sedgwick, this book is not so much interested in revealing—outing—"queer Jews" as it is in exploring the complex social arrangements and processes through which modern Jewish and homosexual identities emerged as traces of each other during the last two hundred years.

The publication of Queer Theory and the Jewish Question is reason to get excited... [it] juggles theoretical concerns with popular culture and never condescends. But more than that, the book makes reading serious essays about homosexuality fun again. And that's saying a lot. The Guide

This skilled collection does more than track the career of the queer-Jewish analogy from Spanish crypto-Jews to Israel drag queens.... It's a vital, long-awaited book. Marissa Pareles, Lambda Book Report

This scholarly and well-documented volume is a strong addition to any academic or research collection focusing on the Jewish identity, homosexual identity, and particularly the relation between the two. American Jewish Libraries Newsletter

Other than Boyarin'sUnheroic Conduct: The Rise of Heterosexuality and the Invention of the Jewish Man, this appears to be the first book to explore the inventions of the homosexual and the modern Jew. Seventeen insightful essays show how those inventions are mutually implicated.... Highly recommended. Choice

It is one of those rare academic works that is difficult, if not impossible, to put down. Melissa M. Wilcox, Whitman College, Nova Religio

Addresses in thoughtful and engaging ways the intersection of Jewishness and the queer in a range of cultural texts. David Moscowitz, An Interdisciplinary Journal of Jewish Studies

Strange Bedfellows: An Introduction, by Daniel Boyarin, Daniel Itzkovitz, and Ann Pellegrini
From Vested Interests, by Marjorie Garber
From Epistemology of the Closet, by Eve Kosofsky Sedgwick
Queers Are Like Jews, Aren't They? Analogy and Alliance Politics, by Janet R. Jakobsen
Freud, Blüher, and the Secessio Inversa: Männerbünde, Homosexuality, and Freud's Theory of Cultural Formation, by Jay Geller
Jew Boys, Queer Boys: Rhetorics of Antisemitism and Homophobia in the Trial of Nathan "Babe'' Leopold Jr. and Richard "Dickie'' Loeb, by Paul B. Franklin
Viva la Diva Citizenship: Post-Zionism and Gay Rights, by Alisa Solomon
Homophobia and the Postcoloniality of the "Jewish Science', by Daniel Boyarin
Messianism, Machismo, and "Marranism'': The Case of Abraham Miguel Cardoso, by Bruce Rosenstock
The Ghost of Queer Loves Past: Ansky's "Dybbuk'' and the Sexual Transformation of Ashkenaz, by Naomi Seidman
Barbra's "Funny Girl'' Body, by Stacy Wolf
Tragedy and Trash: Yiddish Theater and Queer Theater, Henry James, Charles Ludlam, Ethyl Eichelberger, by Michael Moon
You Go, Figure; or, The Rape of a Trope in the "Prioress's Tale', by Jacob Press
Dickens's Queer "Jew'' and Anglo-Christian Identity Politics: The Contradictions of Victorian Family Values, by David A. H. Hirsch
Coming Out of the Jewish Closet with Marcel Proust, by Jonathan Freedman
Queer Margins: Cocteau, La Belle et la béte, and the Jewish Difference, by Daniel Fischlin
Reflections on Germany, by Judith Butler

Daniel Boyarin is Taubman Professor of Talmudic Culture in the departments of Near Eastern studies and rhetoric at the University of California, Berkeley, where he is also an affiliated faculty member in the women's studies department and gay and lesbian studies program. He is the author of Unheroic Conduct: The Rise of Heterosexuality and the Invention of the Jewish Man. Daniel Itzkovitz is associate professor of English at Stonehill College in Easton, Massachusetts. He has published articles on Jewish studies, queer theory, and American literature and is the editor of a new edition of Fannie Hurst's Imitation of Life. Ann Pellegrini is associate professor of religious studies and performance studies at New York University. She is the author of Performance Anxieties: Staging Psychoanalysis, Staging Race.