A Novel from Ming China 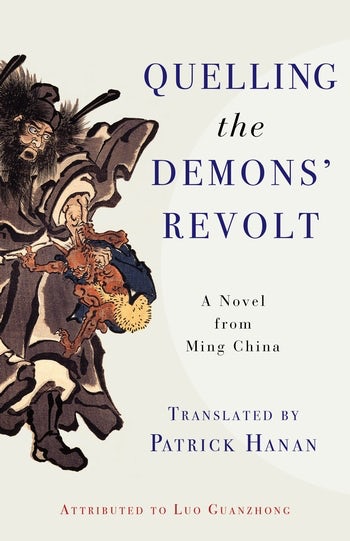 A Novel from Ming China

In this Ming-era novel, historical narrative, raucous humor, and the supernatural are interwoven to tell the tale of an unsuccessful attempt to overthrow the Song dynasty. A poor young girl meets an old woman who gives her a magic book that allows her to create rice and money. Her father, terrified that his daughter's demonic nature might be discovered, marries her off. Forced to flee, she and others with supernatural abilities find themselves in the midst of a grotesque version of a historical uprising, in which facts are intermingled with slapstick humor and wild fictions.

Attributed to the writer Luo Guanzhong, Quelling the Demons' Revolt is centered on the events of the rebellion led by Wang Ze in 1047–48. But it is a distorted, humorous version, in which Wang Ze's lieutenants show up as a comical peddler and a mysterious Daoist priest and a celebrated warrior appears despite having died many years earlier. Rather than fantastic adventures and supernatural marvels, the author points to human vanities and fixations as well as social injustice, warning of the vulnerability of any pursuit of order in a world plagued by demonic forces as well as mundane corruption. Although the story takes place long before the era in which it was written, ultimately Quelling the Demons' Revolt is the story of the Ming dynasty in Song masquerade, presciently warning of the dynasty's downfall. The novel is divided into chapters, but in many ways it is an arrangement of self-contained stories that draw on vernacular storytelling. This translation offers English-speaking readers a spirited example of social critique combined with caustic humor from the era of Luo Guanzhong.

Quelling the Demons’ Revolt is entertaining and informative on a number of levels about the cultural values of old China, even if the details may be a bit gross. This translation should be most appealing for undergraduate students and graduate and professional scholars in literary fields who have an interest in Chinese literature and culture, in comic fiction, or in the comparative study of narrative and characterization. It is short enough to assign over a weekend and rich enough in detail to encourage discussions of literature, history (and the creative adaptations of historical fact for fictional purposes), religion, philosophy, and entertainment. Robert E. Hegel, Ming Studies

Quelling the Demons' Revolt is a marvelous late Ming novel, here beautifully translated by Patrick Hanan. It features a strong heroine (or is she a villain?), Eterna Hu. The demonic exists just under the surface of everyday life, and when it erupts into full revolt, supernatural powers are called upon to restore order. Martial ardor, political authority, and magic propel the plot of the novel. Although I do not want to diminish the ways it would be useful in classrooms in a variety of disciplines (literature, religion, gender studies), its utility should not obscure the fact that it is a rollicking good read. Ann Waltner, University of Minnesota

Quelling the Demons' Revolt is a spirited translation by Patrick Hanan. Beginning with a revolt led by a messianic Buddhist movement, the novel moves from historical events of the eleventh century to stories of folly and venality that resonate with audiences of any era. This comic novel is a cornucopia of tales about trickery, seduction, demonology, and the supernatural, played out by pawnbrokers, seducers, rebels, dim-witted magistrates, and strong-minded women. Hanan’s translation deftly captures the wit and vitality of the original work. Anne McLaren, University of Melbourne

Good tidings! In this new, posthumous translation of one of the most delightful and neglected examples of the early modern Chinese novel, Patrick Hanan’s stylish brush lives again. There is near perfect fusion between the magic feats depicted in this riotous novel of unruly demons run amok in the everyday world and the magic of the translator’s voice to conjure them up for us. The perfect length and subject matter for classroom teaching. Judith Zeitlin, University of Chicago

Luo Guanzhong (c. 1330–c. 1400) is the alleged author of two of China's most famous and beloved works of fiction, The Romance of the Three Kingdoms and The Water Margin.

Patrick Hanan (1927–2014) was Victor S. Thomas Professor of Chinese Literature at Harvard University. He was one of the foremost translators of Chinese fiction from the fourteenth to the twentieth century.