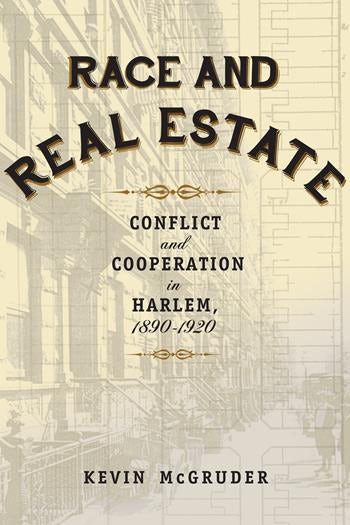 Through the lens of real estate transactions from 1890 to 1920, Kevin McGruder offers an innovative perspective on Harlem's history and reveals the complex interactions between whites and African Americans at a critical time of migration and development. During these decades Harlem saw a dramatic increase in its African American population, and although most histories speak only of the white residents who met these newcomers with hostility, this book uncovers a range of reactions.

Although some white Harlem residents used racially restrictive real estate practices to inhibit the influx of African Americans into the neighborhood, others believed African Americans had a right to settle in a place they could afford and helped facilitate sales. These years saw Harlem change not into a "ghetto," as many histories portray, but into a community that became a symbol of the possibilities and challenges black populations faced across the nation.

This book also introduces alternative reasons behind African Americans' migration to Harlem, showing that they came not to escape poverty but to establish a lasting community. Owning real estate was an essential part of this plan, along with building churches, erecting youth-serving facilities, and gaining power in public office. In providing a fuller, more nuanced history of Harlem, McGruder adds greater depth in understanding its development and identity as both an African American and a biracial community.

In his autobiography, Malcolm X admitted that 'one of my biggest surprises' was that 'Harlem hadn't always been a community of Negroes.' If that surprises you too then you must read this book. Kevin McGruder takes us back in time to a Harlem on the cusp of dramatic change. He shows us uptown Manhattan before Harlem was in vogue. With incredible research and fascinating characters, Race and Real Estate unveils the complicated social and business processes that changed Harlem from an interracial neighborhood into the most recognizable black community in the world. Brian Purnell, Bowdoin College

[Race and Real Estate] challenges the standard saga of the rise of black urban communities during the late 19th and early 20th centuries. Thoroughly researched, the book is an extremely useful reinterpretation of the subject.... Recommended. Choice

McGruder has written a good book and an important revision that should be read alongside the classic texts of 'ghetto formation.' Nathan Cardon, H-SHGAPE

[A] fine work of historical scholarship and incisive interventions in the history of Harlem... [McGruder's] care for the place and its people shines through in [his] meticulous research and forceful arguments. American Historical Review

Acknowledgments
Introduction
1. Black and White New Yorkers
2. The End of the African American Welcome in Harlem
3. From Eviction to Containment
4. The Battle for Church Properties
5. African American Youth in Harlem
6. Real Estate and Politics
7. The Growth in Property Ownership by African Americans in Harlem
Conclusion
Notes
Bibliography
Index

Kevin McGruder is associate professor of history and vice dean of academic affairs at Antioch College. He is the author of Race and Real Estate (CUP, 2015).