Race in a Bottle 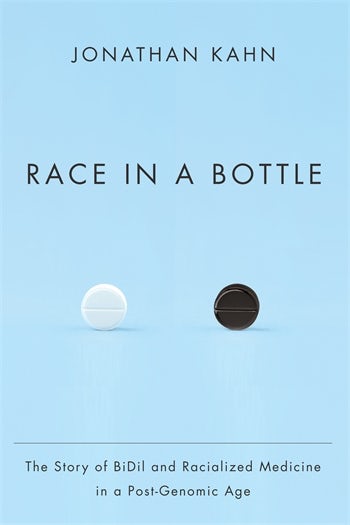 Race in a Bottle

At a ceremony announcing the completion of the first draft of the human genome in 2000, President Bill Clinton declared, "I believe one of the great truths to emerge from this triumphant expedition inside the human genome is that in genetic terms, all human beings, regardless of race, are more than 99.9 percent the same." Yet despite this declaration of unity, biomedical research has focused increasingly on mapping that.1 percent of difference, particularly as it relates to race.

This trend is exemplified by the drug BiDil. Approved by the FDA in 2005 as the first drug with a race-specific indication on its label, BiDil was originally touted as a pathbreaking therapy to treat heart failure in black patients and help underserved populations. Upon closer examination, however, Jonathan Kahn reveals a far more complex story. At the most basic level, BiDil became racial through legal maneuvering and commercial pressure as much as through medical understandings of how the drug worked.

Using BiDil as a central case study, Kahn broadly examines the legal and commercial imperatives driving the expanding role of race in biomedicine, even as scientific advances in genomics could render the issue irrelevant. He surveys the distinct politics informing the use of race in medicine and the very real health disparities caused by racism and social injustice that are now being cast as a mere function of genetic difference. Calling for a more reasoned approach to using race in biomedical research and practice, Kahn asks readers to recognize that, just as genetics is a complex field requiring sensitivity and expertise, so too is race, particularly in the field of biomedicine.

Jonathan Kahn's approach offers an airtight analysis of the commoditization of race in pharmaceutical development, and Race in a Bottle should be of interest and deep concern to numerous audiences. Ruha Benjamin, Boston University

Jonathan Kahn has produced a major and unique contribution, giving readers a 'big picture' understanding of this vital issue by integrating empirically grounded analysis of real controversies into a detailed conceptual roadmap. This is a substantial piece of scholarship and will be of interest to anyone concerned with the escalating, even geometrically expanding use of the concept of race in science and medicine. Troy Duster, University of California, Berkeley

Jonathan Kahn is the undisputed Hercules Poirot of biomedicine. His unraveling of the nonsense, non-science, and complicated illogic that allowed the vasodilator BiDil to be approved by the FDA exclusively for 'black' patients is as compelling a read as any good mystery. This riveting book details what happens to scientific method when profit motive drives the marketing of a drug to the extent that its curative properties are touted as race-specific—even when they're not. Genetic variation in humans has no correlation to the shifting historical meanings of race, yet pharmaceutical companies continue to force the square peg of social category into the round hole of scientific fact. Race in a Bottle is a brilliant deconstruction of the kinds of thought processes that make for bad policy, bad medicine, and ultimately endanger our health as a species. Patricia Williams, Columbia Law School

Jonathan Kahn brilliantly exposes the stunning truth behind new race-based medicines: they are driven by market incentives, not scientific evidence. Based on meticulous research and astute analysis, Kahn constructs a gripping, devastating portrait of profit motivating the use of race in genetic research and pharmaceuticals. Race in a Bottle is absolutely essential for understanding why the myth of biological race has reemerged in genomic science and biotechnology and how it is distorting research, damaging pubic health, and undermining justice in our supposedly post-racial society. Dorothy Roberts, author of Fatal Invention: How Science, Politics, and Big Business Re-create Race in the Twenty-first Century

Kahn expertly weaves together the legal and ethical ramifications of continuing to pursue racialized drugs.... No background in health sciences or genetics is necessary to understand this work. Library Journal

[Race in a Bottle] tackle[s] one of the most important concerns pertaining to race facing our society today.... Must-read material. New Scientist

Mr. Kahn deserves credit for teasing out all the daunting complexities behind these events, including the details of genetic analysis, the perils of racial determinations, and the minutiae of patent law. Abigail Zuger, M.D., New York Times

Kahn's book should be required reading. At a time when the ties between scientific researchers and the pharmaceutical industry are becoming ever more entangled, Race in a Bottle provides valuable insights into the consequences of these connections for health and health care - and, importantly, for what passes as knowledge. Lundy Braun, GeneWatch

A powerful saga packed with engrossing twists and turns of plot and filled with food for thought and debate on the politics and health implications of racial perception. Midwest Book Review

[Kahn] seems as much at home discussing epidemiology and drug marketing as he does the history of US race relations and the intricacies of patenting.... Magnificent. Dr. Martyn Pickersgill, The Biologist

A compelling account of a fascinating case. Anne Pollock, Bulletin of the History of Medicine

Race in a Bottle is lucid and energetic, with fascinating and little-known evidence about clinical trials, the federal regulatory and patent systems, and the history of racial classification.... Kahn offers a heartfelt and persuasive case against allowing race to be reduced to biology. Jennifer L. Hochschild, Journal of American History

[Kahn] skillfully uses the story of the drug BiDil... as the backdrop for examining the expanding role of race in medical genomics, even when the same science has called the existence of race into serious doubt. Aravinda Chakravarti, Nature Medicine

[Jonathan Kahn's] rich portrayal of the changing meaning and uses of race in the wake of genomics makes this book a 'must read' and 'must assign' for all sociologists of race and ethnicity. Sociology of Race and Ethnicity

Acknowledgments
INTRODUCTION: Race and Medicine: Framing [Is] the Problem
1. ORGANIZING RACE: Paths Toward the Re-Biologization of Race in Modern Biomedical Research, Practice, and Product Development
2. THE BIRTH OF BIDIL: How a Drug Becomes "Ethnic"
3. STATISTICAL MISCHIEF AND RACIAL FRAMES FOR DRUG DEVELOPMENT AND MARKETING
4. CAPITALIZING [ON] RACE IN DRUG DEVELOPMENT
5. RACE-ING PATENTS/PATENTING RACE: An Emerging Political Geography of Intellectual Property in Biotechnology
6. NOT FADE AWAY: The Persistence of Race and the Politics of the "Meantime" in Pharmacogenomics
7. FROM DISPARITY TO DIFFERENCE: The Politics of Racial Medicine
CONCLUSIONS AND RECOMMENDATIONS
Notes
Index

Read the introduction, "Race and Medicine: Framing [Is] the Problem" (to view in full screen, click on icon in bottom right-hand corner)

Jonathan Kahn is professor of law at Hamline University School of Law. He holds a Ph.D. in United States history from Cornell University and a J.D. from the Boalt Hall School of Law, University of California, Berkeley. He is the author of Budgeting Democracy: State Building and Citizenship in America, 1897–1928.