Race on the Brain

What Implicit Bias Gets Wrong About the Struggle for Racial Justice 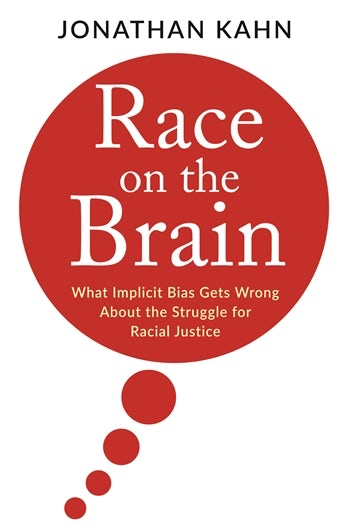 Race on the Brain

What Implicit Bias Gets Wrong About the Struggle for Racial Justice

Of the many obstacles to racial justice in America, none has received more recent attention than the one that lurks in our subconscious. As social movements and policing scandals have shown how far from being “postracial” we are, the concept of implicit bias has taken center stage in the national conversation about race. Millions of Americans have taken online tests purporting to show the deep, invisible roots of their own prejudice. A recent Oxford study that claims to have found a drug that reduces implicit bias is only the starkest example of a pervasive trend. But what do we risk when we seek the simplicity of a technological diagnosis—and solution—for racism? What do we miss when we locate racism in our biology and our brains rather than in our history and our social practices?

In Race on the Brain, Jonathan Kahn argues that implicit bias has grown into a master narrative of race relations—one with profound, if unintended, negative consequences for law, science, and society. He emphasizes its limitations, arguing that while useful as a tool to understand particular types of behavior, it is only one among several tools available to policy makers. An uncritical embrace of implicit bias, to the exclusion of power relations and structural racism, undermines wider civic responsibility for addressing the problem by turning it over to experts. Technological interventions, including many tests for implicit bias, are premised on a color-blind ideal and run the risk of erasing history, denying present reality, and obscuring accountability. Kahn recognizes the significance of implicit social cognition but cautions against seeing it as a panacea for addressing America’s longstanding racial problems. A bracing corrective to what has become a common-sense understanding of the power of prejudice, Race on the Brain challenges us all to engage more thoughtfully and more democratically in the difficult task of promoting racial justice.

Well-reasoned and meticulously documented, this book sounds the loudest warning yet that the current seduction to considering racism as implicit bias can dangerously undermine long-fought attempts to better understand the structural sources of racial inequality. Little irony is lost in suggesting that twenty-first century neuroscience has enabled a reincarnation of the early twentieth-century conception of race in America, a view that an analysis of discrimination can be reduced to individuals’ personal bias. Troy Duster, author of Backdoor to Eugenics, University of California, Berkeley

As powerful as implicit bias tests may be for uncovering prejudice, Kahn skillfully reveals that there are no quick fixes for the problem of deeply entrenched racism. Analytically brilliant and sobering, Race on the Brain asks us to think harder about the structures underlying racial inequality and to be cautious of technological panaceas that promise easy solutions to the intractable work of ensuring social justice. Alondra Nelson, author of The Social Life of DNA: Race, Reparations, and Reconciliation After the Genome

Race on the Brain offers a provocative examination of contemporary discussions of race, racism, and law. Kahn carefully assesses the scientific framework of implicit bias, highlighting its laudable intent and aspirations while revealing hidden challenges. This is a thoughtful and timely contribution that will surely enrich ongoing conversations on race and human cognition and their socio-legal significance. Osagie K. Obasogie, author of Blinded by Sight: Seeing Race Through the Eyes of the Blind

Race on the Brain makes a critical intervention at a time when implicit bias has become a dominant racial frame (witness its presence in the 2016 presidential debates). Without denying its limited value, Kahn persuasively argues that policy makers' and legal scholars' embrace of implicit bias ignores history, social context, and power—the very things that make racism so intractable today. Laura E. Gómez, author of Manifest Destinies: The Making of the Mexican American Race

Kahn's important and masterly work deserves close reading and broad discussion among practitioners and students of law and public policy, but even more so among those interested in promoting racial justice. Library Journal (starred review)

A pivotal work of detailed, meticulous, groundbreaking scholarship, Race on the Brain: What Implicit Bias Gets Wrong About the Struggle for Racial Justice is an extraordinarily well written, organized and presented study The Midwest Book Review

A bracing corrective to what has become a common-sense understanding of the power of prejudice, Race on the Brain challenges the reader to engage more thoughtfully and more democratically in the difficult task of promoting racial justice. An impeccable work of articulate, insightful scholarship The Midwest Book Review

Provides a welcome addition to the consideration of how an interdisciplinary approach to racism can shed light on the question of how systemic inequalities persist over time despite many changes in society. Contemporary Sociology

Jonathan Kahn is the James E. Kelley Chair in Tort Law and professor of law at Mitchell Hamline School of Law. He is also the author of Race in a Bottle: The Story of BiDil and Racialized Medicine in a Post-Genomic Age (Columbia, 2013).