Three Mile Island and the Political Transformation of the 1970s 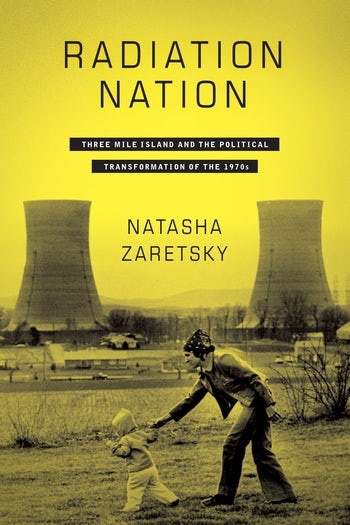 Three Mile Island and the Political Transformation of the 1970s

On March 28, 1979, the worst nuclear reactor accident in U.S. history occurred at the Three Mile Island power plant in Central Pennsylvania. Radiation Nation tells the story of what happened that day and in the months and years that followed, as local residents tried to make sense of the emergency. The near-meltdown occurred at a pivotal moment when the New Deal coalition was unraveling, trust in government was eroding, conservatives were consolidating their power, and the political left was becoming marginalized. Using the accident to explore this turning point, Natasha Zaretsky provides a fresh interpretation of the era by disclosing how atomic and ecological imaginaries shaped the conservative ascendancy.

Drawing on the testimony of the men and women who lived in the shadow of the reactor, Radiation Nation shows that the region's citizens, especially its mothers, grew convinced that they had sustained radiological injuries that threatened their reproductive futures. Taking inspiration from the antiwar, environmental, and feminist movements, women at Three Mile Island crafted a homegrown ecological politics that wove together concerns over radiological threats to the body, the struggle over abortion and reproductive rights, and eroding trust in authority. This politics was shaped above all by what Zaretsky calls "biotic nationalism," a new body-centered nationalism that imagined the nation as a living, mortal being and portrayed sickened Americans as evidence of betrayal. The first cultural history of the accident, Radiation Nation reveals the surprising ecological dimensions of post-Vietnam conservatism while showing how growing anxieties surrounding bodily illness infused the political realignment of the 1970s in ways that blurred any easy distinction between left and right.

This is an epic book, speaking to grand stakes. Centered on Three Mile Island, it is actually a chronicle of postwar America, touching on everything from atomic-age anxieties, to declining faith in expertise, to the long-grinding pessimism of the 'anthropocene.' It is, in short, brilliant, among the best works of history I have read in years. Jeremy Varon, the New School

Radiation Nation is much more than a brilliant cultural analysis of Three Mile Island. Zaretsky offers stunningly original insights into the full scope of modern America, stitching together the history of the arms race with the history of nuclear power to reveal the contested meanings of gender, family, and the fetus. This urgent, important book challenges left-right polarities to uncover surprising connections across diverse social movements. Finis Dunaway, author of Seeing Green: The Use and Abuse of American Environmental Images

List of Illustrations
List of Abbreviations
Preface
Introduction
1. The Culture of Dissociation and the Rise of the Unborn
2. The Accident and the Political Transformation of the 1970s
3. Creating a Community of Fate at Three Mile Island
4. The Second Cold War and the Extinction Threat
Conclusion
Notes
Bibliography
Acknowledgments
Index

Natasha Zaretsky is associate professor of history at Southern Illinois University. She is the author of No Direction Home: The American Family and the Fear of National Decline, 1968-1980 (2007).