Randall Jarrell and His Age 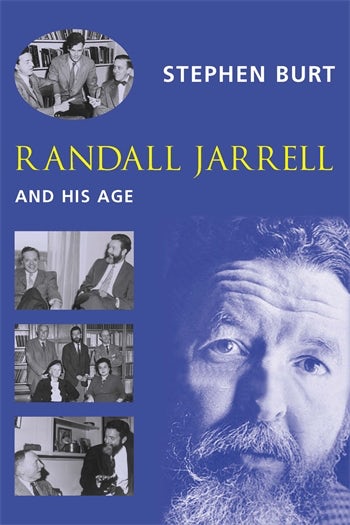 Randall Jarrell and His Age

Randall Jarrell (1914–1965) was the most influential poetry critic of his generation. He was also a lyric poet, comic novelist, translator, children's book author, and close friend of Elizabeth Bishop, Robert Lowell, Hannah Arendt, and many other important writers of his time. Jarrell won the 1960 National Book Award for poetry and served as poetry consultant to the Library of Congress. Amid the resurgence of interest in Randall Jarrell, Stephen Burt offers this brilliant analysis of the poet and essayist.

Burt's book examines all of Jarrell's work, incorporating new research based on previously undiscovered essays and poems. Other books have examined Jarrell's poetry in biographical or formal terms, but none have considered both his aesthetic choices and their social contexts. Beginning with an overview of Jarrell's life and loves, Burt argues that Jarrell's poetry responded to the political questions of the 1930s, the anxieties and social constraints of wartime America, and the apparent prosperity, domestic ideals, and professional ideology that characterized the 1950s. Jarrell's work is peopled by helpless soldiers, anxious suburban children, trapped housewives, and lonely consumers. Randall Jarrell and His Age situates the poet-critic among his peers—including Bishop, Lowell, and Arendt—in literature and cultural criticism. Burt considers the ways in which Jarrell's efforts and achievements encompassed the concerns of his time, from teen culture to World War II to the Cuban Missile Crisis; the book asks, too, how those efforts might speak to us now.

A required source for anyone doing research on the life and work of this noteworthy American poet and critic. Library Journal

Burt is one of the leading poet-critics of his own emerging generation, turning out an astonishing amount of terrific review-based criticism... His project here is nothing less than the full-scale rehabilitation of Jarrell. Publishers Weekly, starred review

Stephen Burt does Randall Jarrell the finest kind of critical justice.... There is sympathy here, and imagination, and just the right degree of intellectual detachment. Louis Menand

Jarrell brooded endlessly on the crucial question of how to engage with life, but ultimately the capacity seemed to elude him. Burt traces, rather wonderfully, his obsession with youth, age and aging. Los Angeles Times Book Review

The achievement of Stephen Burt's excellent book Randall Jarrell and His Age, is to show the true subtlty, strangeness, and deep feeling opened up by these apparently unpromising explorations of self and others in the bare style that was Jarrell's trademark. Poetry Review

Burt helps us to dig out the shards that constitute Jarrell's poems and to make them speak of, and speak to, selves and others, in his age and ours. PN Review

In his splendid book Randall Jarrell and His Age Stephen Burt finally answers the question 'Who was Randall Jarrell?' by setting his poems within several layers of aesthetic, social, and psychological contexts to not only illuminate the oeuvre but to better understand the complexity of Jarrell's own intellectual interventions in the cultural climate of America from the late 1930s through his death in 1965. Jacques Khalip, Boston Review

A book that pays Jarrell the tribute of placing his poetics front and center, dispensing with most of the trappings of biography and mythology. Poetry

Randall Jarrell and His Age is a sophisticated and scholarly treatment of an artist and his metier that will be best appreciated by serious and broadly read specialists. Chuck Berg, Magill's Literary Annual

A study impressive for the intensity, detail, and subtlety of its readings...it is likely to be the definitive study of Jarrell for years to come Edward Brunner, Contemporary Literature

Stephen Burt is assistant professor of English at Macalester College. His essays on poets and poetry have appeared in the Boston Review, London Review of Books, Times Literary Supplement, and the Blackwell Companion to 20th Century Poetry, among other places. His book of poems, Popular Music, won the Colorado Prize for 1999.