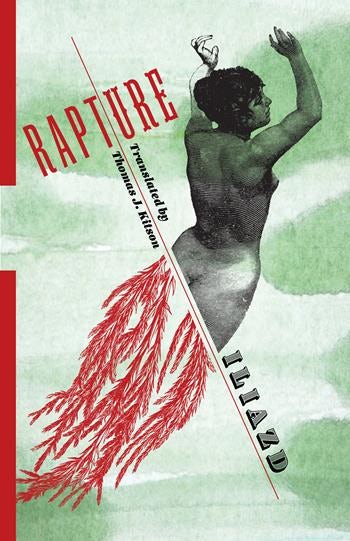 The draft dodger Laurence yearns to take control of his destiny. Having fled to the highlands, he asserts his independence by committing a string of robberies and murders. Then he happens upon Ivlita, a beautiful young woman trapped in an intricately carved mahogany house. Laurence does not hesitate to take her as well. Determined to drape his young bride in jewels, he plots ever more daring heists. Yet when Laurence finds himself casting bombs alongside members of a revolutionary cell, he must again ask: is he a free man or a pawn of history?

Rapture is a fast-paced adventure-romance and a literary treat of the highest order. With a deceptively light hand, Iliazd entertains questions that James Joyce, Virginia Woolf, and Thomas Mann once faced. How does the individual balance freedom and necessity, love and death, creativity and sterility? What is the role of violence in human history and culture? How does language both comfort and fail us in our postwar, post-Christian world?

Censored for decades in the Soviet Union, Rapture was nearly lost to Russian and Western audiences. This translation rescues Laurence's surreal journey from the oblivion he, too, faces as he tries to outrun fate.

A fast-paced, mordantly funny yarn that borrows from (and subverts) the adventure genre. . . . while this novel has taken a long time to find a new audience, there’s nothing musty about Thomas J. Kitson’s excellent translation, which makes the prose of the book seem fresh. Nick Holdstock, Open Letters Monthly

Rapture is both traditional regional adventure tale—adapted for and reflecting its times—and experimental fiction, Iliazd taking liberties with story, style, and language. In upending—in a variety of ways, no less—readers' expectations, Iliazd's variation on this kind of tale offers very different satisfactions. A vivid, often comic, and always harsh story it veers between exciting pulp and much more ambitious mythifying near-poetry; it's also almost surprisingly accessible—and a fun, if twisted, read. M.A. Orthofer, The Complete Review

Iliazd’s (birth name Ilia Zdanevich) rediscovered and newly translated work is a gem. . . . There are many levels and layers in this remarkable, short novel. And all of them deserve a close look. Paul E. Richardson, Russian Life

Thomas J. Kitson has come up with a fascinating translation of Iliazd’s first novel, Rapture, an eccentric volume that will hopefully bring some welcome attention to this obscure literary figure. Lucas Spiro, The Arts Fuse

The interweaving themes and overlapping plotlines are rich with folklore, allegory, and autobiography, to which Kitson’s expansive essay is an erudite, insightful guide. He identifies mythic and literary sources that Iliazd pillaged (from the Bible through Ovid to Dostoevsky and Jarry), summarizes the still meager critical literature in Russian, and comments on details of the text that only a translator could elucidate. The translation reads fluently, and the cover design, by Roberto de Vicq de Cumptich, is top notch. M. Kasper, Rain Taxi Review

Although futuristic in its style (from abandoning punctuation to including unprintable words), the novel’s pagan narrative has the same hypnotizing effect on the reader as Stravinsky's Rite of Spring. Kitson does not put a foot wrong, in a translation so accurate and sensitive that it is unlikely to be superseded. 2018 Read Russia Prize, special mention, jury remarks

American Slavists should be grateful to Kitson and to the Russian Library series of Columbia University Press for bringing this novel to light in English. Elizabeth Klosty Beaujour, Slavic and East European Journal

A provocative, often parodic, synthesis of currents in Russian and European literature of the late nineteenth and early twentieth centuries. . . . In brief, the publication of this novel in such a handy, well-executed form is welcome as an important addition to twentieth century Russian literature in English. Jeff Love, The Russian Review

Translator Kitson provides an excellent introduction which discusses Iliazd’s life, as well as putting this book into the context of his times and surroundings, whilst discussing its deeper meanings. . . . [Rapture] is an adventurous, experimental and thought-provoking novel which most definitely deserves more attention than it’s received over the years. Karen Langley, Shiny New Books

[An] absolutely peculiar world that engulfs the reader from the first line. Boris Poplavsky

A closely guarded secret of Russian literature, the prose of Ilia Zdanevich, better known by his artistic pseudonym Iliazd, has never left the narrow coterie of literary connoisseurs. Censored in the USSR, thanks to the author's dissidence from the official Soviet ideology and aesthetic, and spurned by Russian émigrés because of his leftist politics and unapologetic stylistic and narrative experimentalism, Iliazd's work has been rediscovered only recently, challenging received wisdom about twentieth-century Russian literature and its place in transnational modernism. Now, for the first time, this rapturously narrated parable mythologizing the life of the Russian avant-garde is available to Anglophone readers. This tale of murder, kidnapping, passion, betrayal, treasure hunt, and political terrorism is set against the backdrop of a fantastic land inspired by the author's native Caucasus. The novelistic repertory of modernism grows richer and more diverse as Rapture joins contemporary French, Italian, and Anglo-American experiments pushing the limits of the genre. Leonid Livak, University of Toronto

A pathbreaking contribution to the canon of Modernist literature. Public Seminar

A poetic homage to and elegy for the Russian avant-garde in novel form. Katherine Bowers, Literature and Translation

Introduction: The Golden Excrement of the Avant-Garde
Rapture
Notes

Iliazd (1894–1975) is the nom de plume of Ilia Zdanevich, an émigré who arrived in Paris after the Russian Civil War in time to participate in the last days of Paris Dada and the birth of surrealism. Unable to publish his writing, Iliazd forged a new career in book art, gaining fame for the series of artists' books he published under the "41 degrees" imprint. He collaborated with Picasso, Chagall, Matisse, Legér, Giacometti, Miró, and Max Ernst, among others, on books of his own poetry, anthologies of "nonsense" poetry from all ages and traditions, and works by rediscovered poets, travelers, and romantic astronomers. Iliazd has been the subject of solo exhibitions at the Centre Georges Pompidou (1978) and the Museum of Modern Art (1987).

Thomas J. Kitson is a freelance translator in New York City. He holds a Ph.D. in Russian literature from Columbia University.