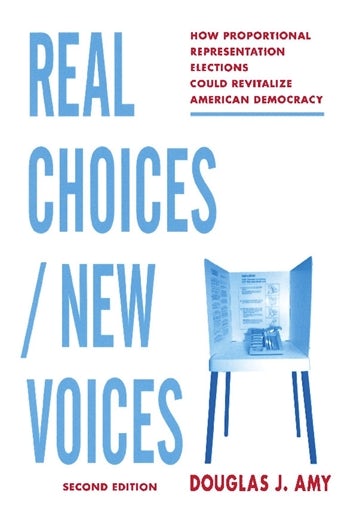 There is a growing realization that many of the problems afflicting American elections can be traced to the electoral system itself, in particular to our winner-take-all approach to electing officials. Douglas Amy demonstrates that switching to proportional representation elections—the voting system used in most other Western democracies, by which officials are elected in large, multimember districts according to the proportion of the vote won by their parties—would enliven democratic political debate, increase voter choice and voter turnout, ensure fair representation for third parties and minorities, eliminate wasted votes and "spoliers," and ultimately produce policies that better reflect the public will. Looking beyond new voting machines and other quick fixes for our electoral predicament, this new edition of Real Choices/New Voices offers a timely and imaginative way out of the frustrations of our current system of choosing leaders.

Douglas Amy has written a very important book showing how fundamental election reform that involves European-style proportional representation would create 'a different and better kind of democracy' in the United States. Lani Guinier

Amy's book may be the best of the genre.... Amy's coverage of these issues [of election systems] is well articulated and nicely organized, and for those confronting these issues for the first time, it provides an excellent introduction... The first edition of this book was a useful addition to the literature. The second edition is even better. Richard L. Engstrom, Representation

Douglas Amy is professor of politics at Mount Holyoke College. He lives in Northampton, MA.