A Cultural History of Saint Namdev in India 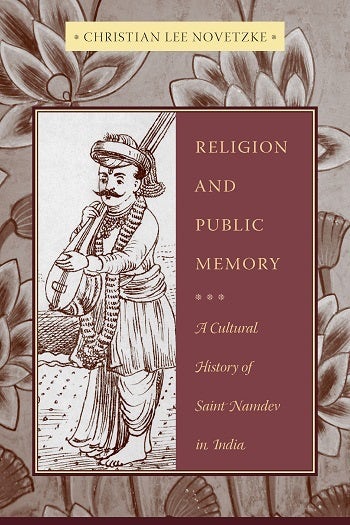 A Cultural History of Saint Namdev in India

Namdev is a central figure in the cultural history of India, especially within the field of bhakti, a devotional practice that has created publics of memory for over eight centuries. Born in the Marathi-speaking region of the Deccan in the late thirteenth century, Namdev is remembered as a simple, low-caste Hindu tailor whose innovative performances of devotional songs spread his fame widely. He is central to many religious traditions within Hinduism, as well as to Sikhism, and he is a key early literary figure in Maharashtra, northern India, and Punjab.

In the modern period, Namdev appears throughout the public spheres of Marathi and Hindi and in India at large, where his identity fluctuates between regional associations and a quiet, pan-Indian, nationalist-secularist profile that champions the poor, oppressed, marginalized, and low caste. Christian Lee Novetzke considers the way social memory coheres around the figure of Namdev from the sixteenth century to the present, examining the practices that situate Namdev's memory in multiple historical publics. Focusing primarily on Maharashtra and drawing on ethnographies of devotional performance, archival materials, scholarly historiography, and popular media, especially film, Novetzke vividly illustrates how religious communities in India preserve their pasts and, in turn, create their own historical narratives.

This erudite study is an important contribution to several important issues in contemporary social theory, especially the relations of memory, history, and community through the past thousand years of the vernacular millennium. Deeply grounded in manuscript sources, it never loses sight of the living context of performance where the texts originated. Sumit Guha, Rutgers University

In a sometimes dense but always lively way, Christian Lee Novetzke lets us see the processes that allow the songs and stories of a fourteenth-century saint to live vibrantly today. His book might be called the 'many lives of Sant Namdev' a saint (or sant) very important in Marathi and Hindi but neglected in English. With a discussion of 'public memory' and a thorough explanation of the way in which orality influences literacy and performance trumps permanence, Novetzke brings the cultural world of Namdev to life. He breaks new ground in the field of bhakti studies in his use of many kinds of evidence, from the hand written badas used for several centuries by those who perform the song sermon called kirtan to the film industry that features the sants to the contentious disputes over the idea of Namdev as a social bandit. Eleanor Zelliot, Larid Bell Professor of History, Carleton College

Secular humanist, social bandit, wandering truth-teller, hardscrabble patriot, (pre)-postcolonial critic, humble devotee, saint-Namdev has been many things to many publics. For Christian Lee Novetzke, the many pasts of Namdev offer an opportunity to investigate not only the literary and religious legacy of this important fourteenth-century singersantof Maharashtra but the manner in which he has been remembered across the centuries and its implications in the cultural, social, and political history of early-modern and modern India. Along the way, we learn much about the place and potential of religion in history and the evolution of the public sphere in India and beyond. Novetzke is a skilled and sensitive writer, and he has produced a challenging, erudite, and engaging book that will interest both historians and scholars of religion. William R. Pinch, Wesleyan University

The mobility and plasticity of saints' lives invite us to consider how the past comes to be remembered in different ways at different moments in the lives of religious communities. Religion and Public Memory offers a theoretically sophisticated and historically textured analysis of one saint's reception and legacy over several centuries. Highlighting the importance of social memory in understanding the transmission of the past into a series of presents, this book makes a substantive theoretical and cultural-historical contribution to the study of public memory in religious contexts. Elizabeth Castelli, Barnard College

Christian Lee Novetzke is a rising star of his generation. In this book he takes English-language scholarship on Marathi bhakti traditions to new levels of theoretical sophistication, as he investigates the interactions of text with performance and of history with memory in preserving and embellishing the legacy of Sant Namdev. Anne Feldhaus, professor of religious studies, Arizona State University

In this book Christian Lee Novetzke does a marvelous job of redefining bhakti religion in Indiaso often described as personal devotionas a set of practices of recalling the past that constitutes 'public memory.' Novetzke's elegant theorization of the creation of publics at the interstices of memory and history unfolds through original, nuanced studies of the career of the figure of the saint poet Namdev and of kirtan as an oral, performative form in Maharashtra. Indira Viswanathan, David B. Truman Professor of Asian Studies, Mount Holyoke College

An artful and erudite study.... By far one of the most provocative and insightful recent works on religion in South Asia. The bewildering range of Novetzke's sources, combined with the high levels of theoretical sophistication that he brings to the idea of 'public memory,' make this an incredibly substantive contribution. It is bound to become a classic in the field. Davesh Soneji, The Journal of Asian Studies

Like an expert musician, Novetzke has the ability to sit down at a score and transpose. This book transposes the enduringly popular Maharashtrian poet-saint Namdev, a true icon of what it means to be in love with God, into a fundamentally new key: the sphere of religious publics. Religion and Public Memory thus reconceptualizes a major aspect of Hindu religionindeed, global religionand for those who cherish Namdev, it is a triumph of sympathetic listening. Jack Hawley, Columbia University

Novetzke brings us a major twenty-first-century update to the study of Hindu bhakti traditions.... [His book] demonstrates a broad intellectual move that is worthy of the attention of all historians of religion. Dan Gold, History of Religions

Innovative, exciting, and in many ways pathbreaking.... Its range is surely unusual for a first book. Vasudha Dalmia, Book Review

We can hope others will respond to the historiographic challenges posed so effectively by Novetzke. Brian Hatcher, American Historical Review

List of Illustrations
Preface: The Shape of the Book
Acknowledgments
Introduction: Namdev, Bhakti, Public, and Memory
Part 1. Practices of Memory
1. A Sant Between Memory and History
2. Public Performance and Corporate Authorship
3. Orality and Literacy/Performance and Permanence
Part 2. Publics of Memory
4. Namdev and the Namas: Anamnetic Authorship from the Sixteenth to Nineteenth Centuries
5. Memories of Suffering in the Eighteenth Century
6. A Sant for the Nation in the Nineteenth and Twentieth Centuries
7. The Idea of Namdev in Two Films in the Twentieth Century
Conclusion
Notes
Glossary
References
Index

Christian Lee Novetzke is assistant professor at the University of Washington's Jackson School of International Studies in the South Asia Program and Comparative Religion Program.