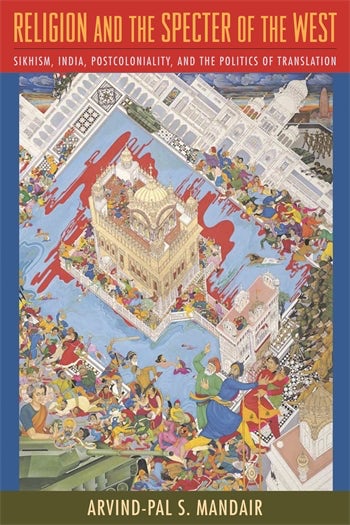 Arguing that intellectual movements, such as deconstruction, postsecular theory, and political theology, have different implications for cultures and societies that live with the debilitating effects of past imperialisms, Arvind Mandair unsettles the politics of knowledge construction in which the category of "religion" continues to be central. Through a case study of Sikhism, he launches an extended critique of religion as a cultural universal. At the same time, he presents a portrait of how certain aspects of Sikh tradition were reinvented as "religion" during the late nineteenth and early twentieth centuries.

India's imperial elite subtly recast Sikh tradition as a sui generis religion, which robbed its teachings of their political force. In turn, Sikhs began to define themselves as a "nation" and a "world religion" that was separate from, but parallel to, the rise of the Indian state and global Hinduism. Rather than investigate these processes in isolation from Europe, Mandair shifts the focus closer to the political history of ideas, thereby recovering part of Europe's repressed colonial memory.

Mandair rethinks the intersection of religion and the secular in discourses such as history of religions, postcolonial theory, and recent continental philosophy. Though seemingly unconnected, these discourses are shown to be linked to a philosophy of "generalized translation" that emerged as a key conceptual matrix in the colonial encounter between India and the West. In this riveting study, Mandair demonstrates how this philosophy of translation continues to influence the repetitions of religion and identity politics in the lives of South Asians, and the way the academy, state, and media have analyzed such phenomena.

Overall, Mandair's broad temporal, spatial, and intellectual perspectives make this a very interesting volume. By exploring Sikhism from the perspectives of deconstructionist, postcolonial, and postsecular theory, he fills in an important gap in Sikh philosophy and charts out provocative new directions. Nikky-Guninder Kaur Singh, History of Religions

Arguably the most theoretically incisive work in Sikh studies since the field's inception. Balbinder Singh Bhogal, Bulletin of the School of Oriental and African Studies

Mandair has.... provided us with a sketch of a postsecular theory that promises to vigorously decolonize the mind. Harjot Oberoi, University of British Columbia, The Journal of Asian Studies

By pursuing a postcolonial perspective that aims to undo inherited imperialist configurations, Mandair paves new ground and pushes the boundaries of a currently widespread postcolonial critique of power, especially when it comes to the question of religion and secularism in the public sphere. Michael Nijhawan, York University, Translation Studies

[A]n ambitious book that is an important contribution to the critical discourse about religion in the context of post-colonialism. Gavin Flood, University of Oxford, Method and Theory in the Study of Religion

Arvind-Pal S. Mandair is associate professor of Asian languages and cultures and S.C.S.B. Endowed Professor of Sikh Studies at the University of Michigan. He is a founding coeditor of the journal Sikh Formations: Religion, Culture, Theory.