Classic and Contemporary Approaches and Methodologies 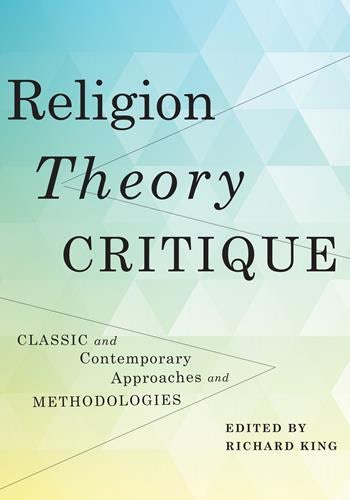 Classic and Contemporary Approaches and Methodologies

Religion, Theory, Critique is an essential tool for learning about theory and method in the study of religion. Leading experts engage with contemporary and classical theories as well as non-Western cultural contexts. Unlike other collections, this anthology emphasizes the dynamic relationship between "religion" as an object of study and different methodological approaches and openly addresses the question of the manifold ways in which "religion," "secular," and "culture" are imagined within different disciplinary horizons. This volume is the first textbook which seeks to engage discussion of classical approaches with contemporary cultural and critical theories.

Contributors write on the influence of the natural sciences in the study of religion; the role of European Christianity in modeling theories of religion; religious experience and the interface with cognitive science; the structure and function of religious language; the social-scientific study of religion; ritual in religion; the phenomenology of religion; critical theory and religion; embodiment and religion; the impact of colonialism and modernity; theorizing religion in terms of race and ethnicity; links among religion, nationalism, and globalization; the interplay of gender, sex, and religion; and religion and the environment. Each chapter introduces the topic, identifies key theorists and issues, and respects the pluralistic nature of the scholarship in the field. Altogether, this collection scrutinizes the explicit and implicit assumptions theorists make about religion as an object of analysis.

Covering an important and impressive range of theoretical approaches and critical engagement, this sophisticated book will be a useful resource for serious scholars of religion as well as those working in related fields such as anthropology, sociology of religion, and psychology of religion. Hugh Urban, Ohio State University

Once driven by a comparative method on the trail of timeless universals, the academic study of religion is today an entirely different beast: a newer generation is far more sensitive to viewpoint, theory, and the practical implications of scholarship itself. Religion, Theory, Critique offers a set of state-of-the-art essays that keep in sight both the study of religious people as well as those who classify them as religious. It therefore sets the table for scrutinizing the entire field—including our tools and our assumptions. Russell McCutcheon, University of Alabama

This volume will quickly become essential to undergraduate and graduate ‘theory and method’ courses, as well as a range of ‘religion and culture’ courses and graduate student reading lists. M. Gail Hamner, Syracuse University

Because of its clarity, substance, and scope, this resource will be valuable for those interested in theorizing religion. Recommended. Choice

Praiseworthy for its historico-critical, self-reflective, and multi-disciplinary discussion of the complex world that is religious studies...this along makes it an excellent pedagogical reference. Reading Religion

An impressive volume. . . . Nearly all scholars of religion could benefit from an encounter with these essays. Nova Religio

Richard King is professor of Buddhist and Asian studies at the University of Kent. He is the author of Early Advaita Vedanta and Buddhism (1995); Orientalism and Religion: Postcolonial Theory, India, and the “Mystic East” (1999); Indian Philosophy: An Introduction to Hindu and Buddhist Thought (1999); and Selling Spirituality: The Silent Takeover of Religion (2004, with Jeremy Carrette).