Edited by Roger A. Lohmann and Jon Van Til 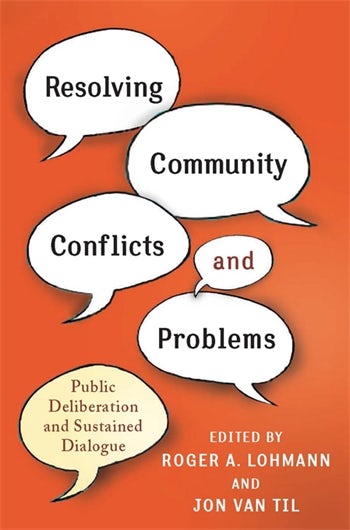 Edited by Roger A. Lohmann and Jon Van Til

Public deliberation and group discussion can strengthen the foundations of civil society, even when the groups engaged in debate share a history of animosity. Scholars have begun to study the dialogue sustaining these conversations, especially its power to unite and divide groups and individuals. The twenty-four essays in this collection analyze public exchanges and the nature of sustained dialogue within the context of race relations, social justice, ethnic conflicts, public-safety issues, public management, community design, and family therapy. They particularly focus on college campuses and the networks of organizations and actors that have found success there. Open discussion may seem like an idealistic if not foolhardy gesture in such milieus, yet in fact the practice proves crucial to establishing and reinforcing civic harmony.

Resolving Community Conflicts and Problems is a very timely, substantive, and much needed addition to the literature. Far too little is available on the topic of public deliberation and sustained dialogue. I have little doubt that this book will provide an important contribution to the field. Mark Umbreit, University of Minnesota

Roger A. Lohmann is emeritus professor of social work at West Virginia University, where he was the founder of the Nova Institute. He is also president of the theory section of the Association for Research on Nonprofit Organizations and Voluntary Action (ARNOVA), former editor of the Nonprofit Management and Leadership Journal, and the author of numerous publications, including Breaking Even: Financial Management in Nonprofit Human Services and The Commons: New Perspectives on Nonprofit Organizations, Voluntary Action, and Philanthropy.

Jon Van Til is professor emeritus of urban studies and community planning at Rutgers University. He is also past president of ARNOVA, the former editor in chief of the Nonprofit and Voluntary Sector Quarterly, executive secretary of the Civil Society Design Network, and author of publications that include Mapping the Third Sector: Voluntarism in a Changing Social Economy; Growing Civil Society: From Nonprofit Sector to Third Space; and Breaching Derry's Walls: The Quest for a Lasting Peace in Northern Ireland.