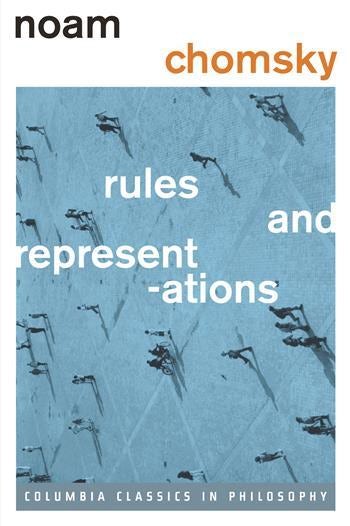 As Norbert Hornstein writes in his foreword, "it underestimates Chomsky's impact in linguistics, philosophy, and psychology to describe it as immense." In Rules and Representations, Noam Chomsky lays out many of the concepts that have made his approach to linguistics and human cognition so instrumental to our understanding of language.

In this influential and controversial work Chomsky draws on philosophy, biology, and the study of the mind to consider the nature of human cognitive capacities, particularly as they are expressed in language. He arrives at his well-known position that there is a universal grammar, genetically determined, structured in the human mind, and common to all human languages. Aside from his examination of the various principles of the universal grammar—its "rules and representations"—Chomsky considers the biological basis of language capabilities and the possibility of studying mental structures and capacities in the manner of the natural sciences. Finally, he also explores whether there may be similar "grammars" of perception, art, human nature, scientific reasoning, and the unconscious.

Based on Chomsky's lively 1978 Woodbridge Lectures, this edition, first published in 1980, contains revised versions of the original lectures and two new essays. It also includes an extensive foreword by Norbert Hornstein, discussing Chomsky's ideas and their wide-ranging impact.

From time to time ever since Plato, grammar has been more than the bane of school children or a topic for scholars. It owes its present prominence outside of linguistics to some theses stated... by Noam Chomsky. Ian Hacking, New York Review of Books

Judged in terms of the power, range, novelty and influence of his thought, Noam Chomsky is arguably the most important intellectual alive today... reading Chomsky on linguistics one repeatedly has the impression of attending to one of the more powerful thinkers that ever lived. Paul Robinson, New York Times Book Review

Foreword by Norbert Hornstein
Preface
Part I
1. Mind and Body
2. Structures, Capacities, and Conventions
3. Knowledge of Grammar
4. Some Elements of Grammar
Part II
5. On the Biological Basis of Language Capacities
6. Language and Unconscious Knowledge
Notes
Index

Noam Chomsky is Institute Professor (emeritus) in the Department of Linguistics and Philosophy at the Massachusetts Institute of Technology and Laureate Professor of Linguistics and Agnese Nelms Haury Chair in the Program in Environment and Social Justice at the University of Arizona. He is the author of more than 100 books, including What Kind of Creatures Are We? (Columbia, 2015), The Science of Language (with James McGilvray, 2012), and Requiem for the American Dream (2017).