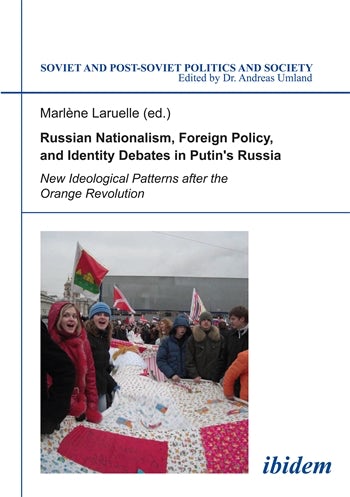 The contributors to this book discuss the new conjunctions that have emerged between foreign policy events and politicized expressions of Russian nationalism since 2005. The 2008 war with Georgia, as well as conflicts with Ukraine and other East European countries over the memory of the Soviet Union, and the Russian interpretation of the 2005 French riots have all contributed to reinforcing narratives of Russia as a fortress surrounded by aggressive forces, in the West and CIS.

This narrative has found support not only in state structures, but also within the larger public. It has been especially salient for some nationalist youth movements, including both pro-Kremlin organizations, such as "Nashi," and extra-systemic groups, such as those of the skinheads. These various actors each have their own specific agendas; they employ different modes of public action, and receive unequal recognition from other segments of society. Yet many of them expose a reading of certain foreign policy events which is roughly similar to that of various state structures.

These and related phenomena are analyzed, interpreted and contextualized in papers by Luke March, Igor Torbakov, Jussi Lassila, Marlène Laruelle, and Lukasz Jurczyszyn.
Introduction, by Marlène Laruelle
1. Is Nationalism Rising in Russian Foreign Policy? The Case of Georgia, by Luke March
2. History, Memory and National Identity: Understanding the Politics of History and Memory Wars in Post-Soviet Lands, by Igor Torbakov
3. Negotiating History: Memory Wars in the Near Abroad and the Pro-Kremlin Youth Movements, by Marlène Laruelle
4. Making Sense of Nashi's Political Style: The Bronze Soldier and the Counter-Orange Community, by Jussi Lassila
5. Russian Radical Nationalist Interpretation of the French Riots of November 2005, by Lukasz Jurczyszyn

Dr. Marlène Laruelle is Research Professor of International Affairs at The Institute for European, Russian and Eurasian Studies, George Washington University. She received her PhD from the National Institute for Oriental Languages and Civilizations in Paris, and was a Visiting Scholar at the Woodrow Wilson International Center for Scholars as well as Senior Research Fellow at SAIS, Johns Hopkins University, at Washington, DC.