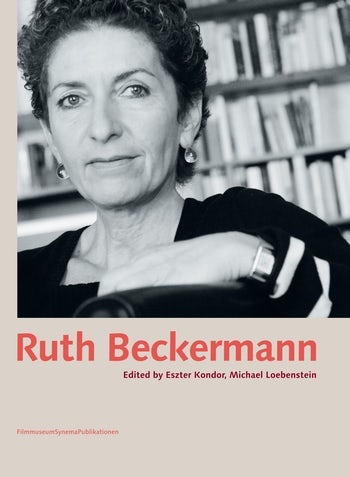 Viennese filmmaker Ruth Beckermann, who has been making films since the 1970s, has created an exciting and widely recognized body of essay and documentary films. Her work is both deeply personal and political. She discusses the complex relationship between history and the present and reflects on her identity as a Jewish woman in postwar Austria and Europe. Tropes of travel and migration feature heavily in her work as means of experiencing the world and of staying alive, literally as well as artistically.

Beckermann’s films speak about identity conflicts and class struggle (Suddenly, a Strike), her family history in the Habsburg monarchy (Paper Bridge), and the war generation as it confronts the crimes of the Wehrmacht (East of War). In 2016, she turned the love affair between poets Paul Celan and Ingeborg Bachmann in postwar Vienna into an unconventional feature film (The Dreamed Ones). In her latest project, The Waldheim Waltz (2018), Beckermann uses 1980s archival footage of the “Waldheim Affair” to reflect on the mechanisms of populism and the media.

This is the first English-language publication on Ruth Beckermann’s filmic oeuvre, including an original essay by Nick Pinkerton, an in-depth conversation with the artist conducted by Alexander Horwath and Michael Omasta, and a detailed filmography by Michael Omasta and Brigitte Mayr.

“Do you know Ruth Beckermann?” I do not know her, I say. But as soon as I take the Paper Bridge, its paths, its voices, its mists, its rivers, its passages, I realize that I recognize her, that I have always already known her. With joy I make her acquaintance again [re-connais], and I salute her, poet in images, painter in words, Voice that listens to the voices of old, the voices of the ages, today. Hélène Cixous

Eszter Kondor has been working at the Austrian Film Museum since 2009. She is the author of Aufbrechen. Die Gründung des Österreichischen Filmmuseums, a German-language chronicle of the early history of the Film Museum.

Michael Loebenstein is the director of the Austrian Film Museum. His work as a curator, researcher, and author since the late 1990s has focused on issues of film, digital media, culture, memory, archives, and museums.

Alexander Horwath is the former director of the Austrian Film Museum in Vienna and the Vienna International Film Festival. Among his publications are books on film curatorship, Michael Haneke, Josef von Sternberg, and American cinema of the 1960s and 70s.

Michael Omasta is the film editor of the weekly Falter and board member of SYNEMA – Society for Film & Media. He has conducted numerous research projects on filmmakers in exile and (co-)edited film books on Claire Denis, Alexander Hammid, Carl Mayer, Wolf Suschitzky, and Peter Lorre, among others.

Nick Pinkerton is a freelance journalist and film programmer. He has written about films for Sight & Sound, Artforum, the Village Voice, Moving Image Source, and Reverseshot, among other publications. He is currently a member of the New York Film Critics Circle.