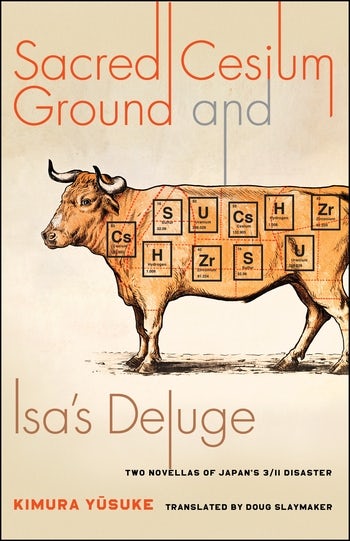 In these two novellas, Kimura Yūsuke explores human and animal life in northern Japan after the natural and nuclear disasters of March 11, 2011. Kimura inscribes the “Triple Disaster” into a rich regional tradition of storytelling, incorporating far-flung voices and experiences to testify to life and the desire to represent it in the aftermath of calamity.
​
In Sacred Cesium Ground, a woman from Tokyo travels to volunteer at a cattle farm known as the “Fortress of Hope,” tending irradiated animals abandoned after the reactor meltdown. The farm closely resembles an actual ranch that has been widely covered in Japan, and the story’s portrayal of those who stubbornly care for animals in spite of the danger speaks to the sense of futility and meaningfulness in the wake of traumatic events. Isa’s Deluge depicts a family of fishermen whose crotchety patriarch draws on old tales of the floods that have plagued the region to fashion himself as the father of the tsunami. Together, the novellas present often-unheard voices of one of Japan’s peripheral regions and their anger toward the government and Tokyo for mishandling and forgetting their part of the country. Kimura’s command of dialect and conversational language is masterfully translated by Doug Slaymaker. Postapocalyptically surreal yet teeming with life, Kimura’s stories will be a revelation for readers looking for a new perspective on the disaster’s consequences for Japan and on the interrelated meanings of human and animal lives and deaths.

Sacred Cesium Ground and Isa’s Deluge is a potent representation of stubborn locals and places that refuse to be forgotten, clinging to integrity and humanity in the face of disaster and apathy. Defiant and awake, Kimura’s work speaks softly and carries a wallop. Foreword Reviews (starred review)

Two haunting novellas that are slight in length yet dense with meaning, enhancing the growing genre of post-3/11 literature in response to the catastrophic March 11, 2011, Tohoku earthquake, tsunami, and Fukushima nuclear meltdown. . . . Kimura's novellas offer a piercing portrait of the abandoned and forgotten. Booklist

Both novellas highlight peripheral voices in the post-3/11 period and ultimately return time and again to that tension between a “sacrificial” Tohoku and an all-powerful capital. These perspectives are those not frequently heard and challenge the widespread narrative of an ever-dominant Tokyo. Japan Times

Kimura Yūsuke's novels are expanding the frontiers of Japanese-language literature. Literature consists of giving voice to the speechless, so novels at the frontiers often take on strange shapes. Kimura Yūsuke is attentive to and gives shape to vital voices of the people and animals of northeastern Japan that few have been able to hear. His vision goes far beyond Tohoku; it captures the future of the planet.

Animals are speechless. In Sacred Cesium Ground, Kimura speaks up for them. The residents of Japan's disaster-ravaged northeastern region are voiceless. He gives them voice in Isa's Deluge. In a spirit of solidarity with the silenced and marginalized, he reexamines the logic behind Japan’s modernity. The result is this volume: outrageously honest and powerfully haunting.

Kimura pulls the reader into the irradiated zone where residents struggle for justice against a government that treats them as disposable as the cattle they illegally tend. Sacred Cesium Ground asks tough questions: What will happen to Japan’s irradiated areas? Who is responsible for this nuclear tragedy? Slaymaker’s translation brings this important novel into dialogue with nuclear fiction worldwide.

Isa's Deluge is at once a story of the triple disaster in northeastern Japan and of one man's search for his roots. Kimura's themes of destruction and ancestry culminate in an unforgettable, searing attack by the long marginalized against the powers that be.

Kimura Yūsuke was born in 1970 in Hachinohe, Aomori Prefecture. He is the author of several acclaimed works, many of which are set in this region. These are the first of his works to be translated into English.

Doug Slaymaker is a professor of Japanese at the University of Kentucky. He is the translator, with Akiko Takenaka, of Hideo Furukawa’s Horses, Horses, in the End the Light Remains Pure (Columbia, 2016).