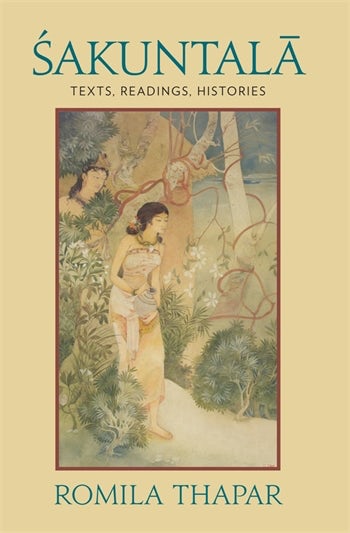 The figure of Sakuntala appears in many forms throughout South Asian literature, most famously in the Mahabharata and in Kalidisa's fourth-century Sanskrit play, Sakuntala and the Ring of Recollection. In these two texts, Sakuntala undergoes a critical transformation, relinquishing her assertiveness and autonomy to become the quintessentially submissive woman, revealing much about the performance of Hindu femininity that would come to dominate South Asian culture. Through a careful analysis of sections from Sakuntala and their various iterations in different contexts, Romila Thapar explores the interactions between literature and history, culture and gender, that frame the development of this canonical figure, as well as a distinct conception of female identity.

Through a timeless character of legend and literature, we are allowed a ringside view of our most fascinating culturaland genderedhistory. India Today

Thapar shows how it is possible to express complex ideas, rooted in philosophy and hermeneutics, without recourse to jargon. This book is a frontrunner for the prize of the best book on Indian history. Telegraph

As fascinating as Sakuntala's journey is Thapar's retelling of it and her careful assumption of the role of a literary detective. Hindu

Thapar's wide-ranging essays and monographs make a strong case for the urgency to historicize traditions and highlight the changing meanings of texts and oral cultures. Hindustan Times

A virtuoso feat of historical and cultural analysis. Biblio

Professor Thapar's book is not only significant in uncovering the historical impulses, often multiply driven, that empower certain readings or receptions of the story but also gives us in the process many of those forgotten stories Saswati Sengupta, Religions of South Asia

Preface
1. Preliminaries
2. The Narrative from the Mahabharata
3. The Abhijñana-sakuntalam of Kalidasa
Sakuntala and the Ring of Recollection—the play by Kalidasa
4. Popular and high culture as historical parallels
5. Adaptations: another popular tradition and its role in another court
6. Translations: Orientalism, German romanticism and the image of Sakuntala
7. Translation: colonial views
8. Sakuntala from the perspective of middle-class nationalism
9. Conclusion
Endnotes

Romila Thapar specializes in early Indian history and is professor emerita in history at Jawaharlal Nehru University, New Delhi. In 1983 she was elected general president of the Indian History Congress and in 1999 a corresponding fellow of the British Academy. Her best known works are Ashoka and the Decline of the Mauryas, From Language to State, Interpreting Early India, and Time as a Metaphor of History: Early India.