Self-Consciousness and the Critique of the Subject

Hegel, Heidegger, and the Poststructuralists 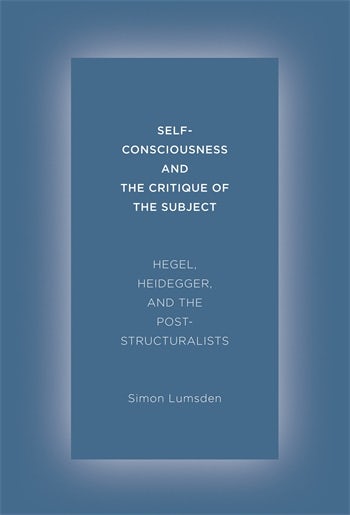 Self-Consciousness and the Critique of the Subject

Hegel, Heidegger, and the Poststructuralists

Poststructuralists hold Hegel responsible for giving rise to many of modern philosophy's problematic concepts—the authority of reason, self-consciousness, the knowing subject. Yet, according to Simon Lumsden, this animosity is rooted in a fundamental misunderstanding of Hegel's thought, and resolving this tension can not only heal the rift between poststructuralism and German idealism but also point these traditions in exciting new directions.

Revisiting the philosopher's key texts, Lumsden calls attention to Hegel's reformulation of liberal and Cartesian conceptions of subjectivity, identifying a critical though unrecognized continuity between poststructuralism and German idealism. Poststructuralism forged its identity in opposition to idealist subjectivity; however, Lumsden argues this model is not found in Hegel's texts but in an uncritical acceptance of Heidegger's characterization of Hegel and Fichte as "metaphysicians of subjectivity." Recasting Hegel as both post-Kantian and postmetaphysical, Lumsden sheds new light on this complex philosopher while revealing the surprising affinities between two supposedly antithetical modes of thought.

Self-Consciousness and the Critique of the Subject addresses a topic that, while familiar within the tradition of continental philosophy, is rarely addressed with the focus and clarity found here. Simon Lumsden has his own distinctive way of bringing Hegel to life, with Hegel's views insightfully presented in a readily understandable way in clear prose uncluttered by 'Hegelese.' Paul Redding, University of Sydney

The great strength of Simon Lumsden's analysis is that it straddles a number of different philosophical worlds. Though writing from a largely Hegelian perspective, Lumsden has the audacity to wander about in other fields and consider other figures—that is, to venture outside the confines of his academic territory. Self-Consciousness and the Critique of the Subject is a highly disciplined work. It focuses on the status of the subject in the five philosophers that it analyzes and brings those thinkers into a confrontation with each other in a way that charts a new path for our understanding of German idealism and poststructuralism. Daniel W. Smith, Purdue University

This clearly written and ambitiously set up book does provide a welcome kind of Anstoß to provoke further thought for anyone interested in the relation between German idealism, Heidegger and poststructuralism. Johan de Jong, Hegel-Studien

Simon Lumsden is senior lecturer in philosophy at the University of New South Wales, Sydney. He is recipient of fellowships from the DAAD and the Australian Research Council and has published widely on German idealism, phenomenology, and poststructuralism.