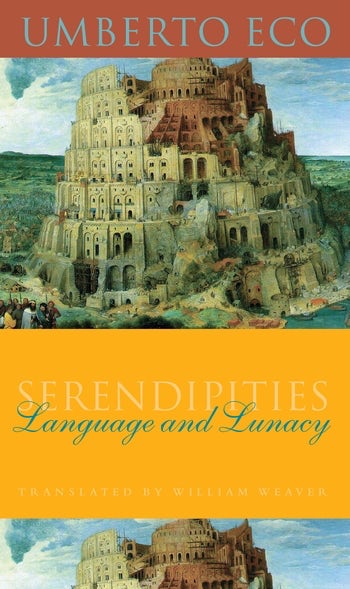 Best-selling author Umberto Eco's latest work unlocks the riddles of history in an exploration of the "linguistics of the lunatic," stories told by scholars, scientists, poets, fanatics, and ordinary people in order to make sense of the world. Exploring the "Force of the False," Eco uncovers layers of mistakes that have shaped human history, such as Columbus's assumption that the world was much smaller than it is, leading him to seek out a quick route to the East via the West and thus fortuitously "discovering" America. The fictions that grew up around the cults of the Rosicrucians and Knights Templar were the result of a letter from a mysterious "Prester John"—undoubtedly a hoax—that provided fertile ground for a series of delusions and conspiracy theories based on religious, ethnic, and racial prejudices. While some false tales produce new knowledge (like Columbus's discovery of America) and others create nothing but horror and shame (the Rosicrucian story wound up fueling European anti-Semitism) they are all powerfully persuasive.

In a careful unraveling of the fabulous and the false, Eco shows us how serendipities—unanticipated truths—often spring from mistaken ideas. From Leibniz's belief that the I Ching illustrated the principles of calculus to Marco Polo's mistaking a rhinoceros for a unicorn, Eco tours the labyrinth of intellectual history, illuminating the ways in which we project the familiar onto the strange.

Eco uncovers a rich history of linguistic endeavor—much of it ill-conceived—that sought to "heal the wound of Babel." Through the Middle Ages and the Renaissance, Greek, Hebrew, Chinese, and Egyptian were alternately proclaimed as the first language that God gave to Adam, while—in keeping with the colonial climate of the time—the complex language of the Amerindians in Mexico was viewed as crude and diabolical. In closing, Eco considers the erroneous notion of linguistic perfection and shrewdly observes that the dangers we face lie not in the rules we use to interpret other cultures but in our insistence on making these rules absolute.

With the startling combination of erudition and wit, bewildering anecdotes and scholarly rigor that are Eco's hallmarks, Serendipities is sure to entertain and enlighten any reader with a passion for the curious history of languages and ideas.

Eco cajoles his readers to go out and learn more, and perhaps, to disagree with him. Scott Gordon, The Daily Yomiuri

Erudite, wide-ranging, and slyly humorous.... The literary examples Eco employs range from Dante to Dumas, from Sterne to Spillane. His text is thought-provoking, often outright funny, and full of surprising juxtapositions. The Atlantic

Fans of Eco's novels will not be left dissatisfied--his fictional players are still present: Templars, Illuminati, Jesuits, Theosophists, and Masons. They all have a part in this intriguing look at how the study of language can be full of surprises. Booklist

Rich in historical anecdotes... Throughout, his treatments are informative, intellectually sophisticated, and thoroughly entertaining. Library Journal

This collection will certainly appeal to specialists. But Eco's ability to balance technical subject matter with broadly intelligible anecdotes and illustrations should make it valuable and pleasurable for anyone seeking a gallant introduction to the philosophy of language. Publishers Weekly

Eco's insistent curiosity, his vital imagination and his almost overwhelming erudition work together like forces of nature to push and pull the book's five essays in unpredictable directions. Review of Contemporary Fiction

These essays are equally entertaining and unusual. Scotland on Sunday

Preface
1. The Force of Falsity
2. Languages in Paradise
3. From Marco Polo to Leibniz: Stories of Intellectual Misunderstandings
4. The Language of the Austral Land
5. The Linguistics of Joseph de Maistre
Notes
Index

Umberto Eco is the author of five best-selling novels and numerous collections of essays. He is a professor of semiotics at the University of Bologna and lives in Italy.