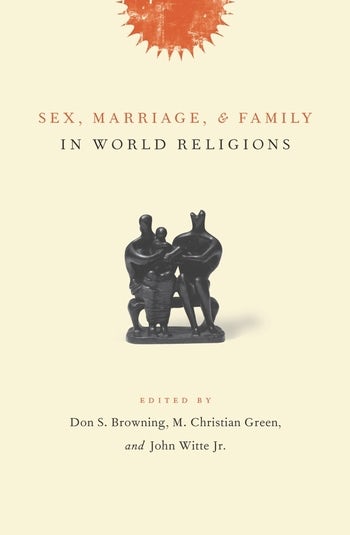 Spanning thousands of years, this new collection brings together writings and teachings about sex, marriage, and family from the Jewish, Christian, Islamic, Hindu, Buddhist, and Confucian traditions. The volume includes traditional texts as well as contemporary materials showing how the religions have responded to the changing conditions and mores of modern life. It reveals the similarities and differences among the various religions and the development of ideas and teachings within each tradition. Selections shed light on each religion's views on a range of subjects, including sexuality and sexual pleasure, the meaning and purpose of marriage, the role of betrothal, the status of women, the place of romance, grounds for divorce, celibacy, and sexual deviance.

Separate chapters devoted to each religion include introductions by leading scholars that contextualize the readings. The selections are drawn from a variety of genres including ritual, legal, theological, poetic, and mythic texts. The volume contains such diverse examples as the Zohar on conjugal manners, a contemporary Episcopalian liturgy for same-sex unions, Qur'anic passages on the equality of the sexes, the Ka–masu–tra on husbands, wives, and lovers, Buddhist writings on celibacy, and Confucian teachings on filial piety.

Introduction
1. Judaism, by Michael S. Berger
Introduction
The Hebrew Bible
The Elephantine Marriage Contract
Hellenistic Jewish Philosophy in the Wisdom of Ben Sirach (Ecclesiasticus)
The Damascus Document of the Dead Sea Scrolls
Josephus on Marriage Law
Mishnah on Procreation, Marriage, and Divorce
The Babylonian Talmud
Aggadic Midrash on Marriage and Family
The Babylonian Talmud on Marital Sex
The Babylonian Ordinance from the Academy on Divorce
The Ordinances of Rabbi Gershom (The Light of the Exile)
Medieval Marriage Contracts from the Cairo Geniza
Love Poetry from the Golden Age of Spain
The Order of the Get
Maimonides on Sex
Jewish Mysticism on Marriage and Sex
The Book of the Pious of Medieval Germany
The Epistle on Holiness ("Iggeret Ha-qodesh")
Exchange Between Napoleon and the Jewish "Sanhedrin" on Issues of Marriage
Contemporary Developments in Jewish Marriage Contracts
Reform Opinion on Patrilineal and Matrilineal Descent
2. Christianity, by Luke Timothy Johnson and Mark D. Jordan
Introduction
Creation and the Fall in the Book of Genesis
The Greco-Roman Context
Hellenistic Jewish Moral Instruction
Gospels of Matthew and Luke
Paul's Letters to the Corinthians and Ephesians
Apocryphal Christian Texts
Augustine of Hippo
John Chrysostom
Peter Lombard
The Fourth Lateran Council
Thomas Aquinas
Mechthild of Magdeburg
Martin Luther
Anglican Book of Common Prayer (1549)
John Calvin
The Council of Trent
George Fox
A Contemporary Critique of Sexual Ethics
A Womanist Critique of Family Theology
A Contemporary Liturgy for Same-Sex Unions
3. Islam, by Azizah al-Hibri and Raja' M. El Habti
Introduction
Creation and the Identity of Origin of Women and Men
The Fall from the Garden and Gender Equality
The Marriage Contract
Consent to Marriage
Mahr: The Obligatory Marital Gift
Marital Relations
Polygamy
Marital Conflict
Divorce
Sexual Ethics
Rights Within the Family
4. Hinduism, by Paul B. Courtright
Introduction
Rig Veda 10.85: The Marriage Hymn
The Grhya-Sutras: The Wedding Ceremony
Laws of Manu
The Kamasutra
Divine Marriage: Sivaiva and Parvati
The Karma of Marriage: The King's Wife, the Brahmin's Wife, and the Ogre
A Contemporary Hindu Marriage Ceremony
"Counting the Flowers," a Short Story by Chudamani Raghavan, Translated from the Tamil by the Author
5. Buddhism, Alan Cole
Introduction
The Beginning of the World
The Joys of Ascetism
Married Life Versus Life of the Ascetic
Songs by Buddhist Women
The Conversion of the Nun, Patacara
The Buddha Accepts His Aunt, Gotami, as a Nun
The Buddha's Renunciation of His Family
Confusion Over the Buddha as a Fertility God
Buddhism as a Threat to the Indian Family
The Buddha&rsquo;s Advice for Laity
An Early Buddha Lineage
East Asian Buddhism: An Overview
The Sutra on the Filial Son
The Ghost Festival Sutra
The Sutra on the Profound Kindness of Parents
The Blood Bowl Sutra
6. Confucianism, Patricia Buckley Ebrey
Introduction
The Book of Poetry (Shi jing)
The Analects (Lunyu) of Confucius
Mencius on Filial Piety
Historical Incidents from the Zuo zhuan
Record of Ritual
The Record of Ritual of the Elder Dai
The Classic of Filial Piety
Lives of Model Women
Admonitions for Women
Filial Sons
Mr. Yan's Family Instructions
The Classic of Filial Piety for Women
Yuan Cai on Concubines
Zhu Xi on Family and Marriage
Sexual Offenses in the Code of the Qing Dynasty
Advice to Local Officials on Handling Sexual Offenses
Qing Legal Cases Concerning Sexual Offenses
Chen Duxiu on the Way of Confucius and Modern Life
Feng Youlan on the Philosophy at the Basis of Traditional Chinese Society
Index

Read an >excerpt from the Introduction to Sex, Marriage, and Family in World Religions (pdf)