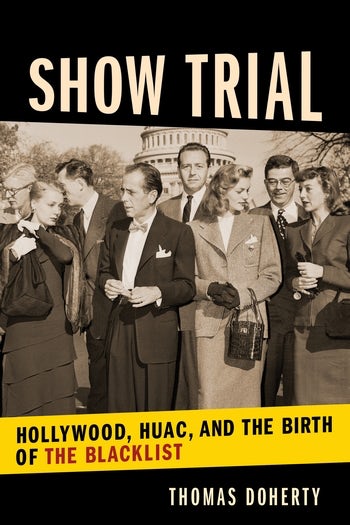 In 1947, the Cold War came to Hollywood. Over nine tumultuous days in October, the House Un-American Activities Committee held a notorious round of hearings into alleged Communist subversion in the movie industry. The blowback was profound: the major studios pledged to never again employ a known Communist or unrepentant fellow traveler. The declaration marked the onset of the blacklist era, a time when political allegiances, real or suspected, determined employment opportunities in the entertainment industry. Hundreds of artists were shown the door—or had it shut in their faces.

In Show Trial, Thomas Doherty takes us behind the scenes at the first full-on media-political spectacle of the postwar era, a courtroom drama starring glamorous actors, colorful moguls, on-the-make congressmen, high-priced lawyers, single-minded investigators, and recalcitrant screenwriters, all recorded by newsreel cameras and broadcast over radio. Doherty explores the deep background to the hearings and details the theatrical elements of a proceeding that bridged the realms of entertainment and politics. He tells the story of the Hollywood Ten and the other witnesses, friendly and unfriendly, who testified; tracks the flight path of the Committee for the First Amendment, the delegation from Hollywood that descended on Washington to protest the hearings; and chronicles the implementation of the postwar blacklist. Show Trial is a rich, character-driven inquiry into how the HUAC hearings ignited the anti-Communist crackdown in Hollywood, providing a gripping new cultural history of one of the most influential events of the postwar era.

Thomas Doherty’s fans, of whom I am one, know he is a first-rate film historian with a sharp eye for political theater as well as a stylish writer with a knack for turning a phrase. Show Trial gives a thorough, well-contextualized, clear-eyed, and witty account of the 1947 HUAC “Hollywood Ten” hearings, full of pithy characterizations and choice bits of business. J. Hoberman, author of An Army of Phantoms: American Movies and the Making of the Cold War

Thomas Doherty’s Show Trial is a uniquely pragmatic history of the Hollywood Blacklist—a big book on a big topic that ruthlessly defies and confounds orthodoxy at every turn. No book in print provides a fuller accounting of the hearings themselves. And no author to date gives his readers so much room to appreciate and understand who said what and why. Jon Lewis, author of Hard-Boiled Hollywood: Crime and Punishment in Postwar Los Angeles

Doherty is one of the best, if not the best, writers in the American studies world today, and has produced an excellent book that will command a great deal of attention. Show Trial sheds new light on the story of the Hollywood Ten and HUAC and does it in fresh and exciting ways. One of the book’s greatest strengths is that it stays away from familiar academic debates that focus heavily on politics and instead tells a character-driven story using quotes from a wide variety of contemporaneous participants. Doherty places the personalities of the era—left and right—on center stage. This is easily the most comprehensive and comprehensible study of HUAC and the Hollywood Ten to date, and I predict it will become the book to read on this topic. Steven Ross, author of Hitler in Los Angeles: How Jews Foiled Nazi Plots Against Hollywood and America

Illuminating. . . . With accessible prose and astute academic insight, Doherty shows us that both the studios and the Hollywood Ten were victims of HUAC. His Show Trial is likely to become the standard authority on the genesis of the Hollywood blacklist. Christopher Yogerst, The Washington Post

[Doherty] brings fresh scepticism to the many self-serving myths that have encrusted the tale. . . . It is impossible to read Show Trial without thinking about its relevance to the current situation in America. The country is again faced with a resurgence of nativism, racism and isolationism (ironically, it is now progressives who are warning about nefarious Russian influence) and a culture of believing figures in the public eye to be guilty until proven innocent. One can only hope for another pendulum swing, such as the one Thomas Doherty, in this engaging study, demonstrates happened over the Hollywood blacklist. Phillip Lopate, Times Literary Supplement

A thorough and lively chronicle of a shameful episode in American political and entertainment history. Kirkus Reviews

A riveting, exhaustive look at the 1947 House Un-American Activities Committee investigation into Communists in the film industry. . . . In the current era of legislative upheaval, Doherty’s vital, impressive history feels both relevant and urgent. Publishers Weekly

Written with breathtaking concision and all the intrigue of a spy novel, Doherty’s account of the 1947 House Un-American Activities Commission (HUAC) hearing frames the alleged subversion of Hollywood by Communists as the mirror image of the Moscow Trials. Carrie Rickey, Film Quarterly

The historian Thomas Doherty explains in yet another expertly crafted book on American movie history, that the combination of Hollywood and communism has always made for a great show. Journal of American History

Engrossing. . . . The world suffers no shortage of books about the blacklist, but Show Trial stands out for telling its story without grinding axes. Jesse Walker, Reason

Doherty thoroughly chronicles the HUAC circus, with its parade of well-known stars—both defiant (screenwriters Dalton Trumbo) and reluctant (Humphrey Bogart)—and accusers, such as Rep. J. Parnell Thomas. . . . For readers who appreciate both Hollywood's golden age and the postwar politics that animated it. Library Journal

Doherty proves there are still a few surprises, even after recent revisionist accounts exposed deeper ties than previously known between the Hollywood Ten and their Soviet controllers. In his fascinating Show Trial: Hollywood, HUAC, and the Birth of the Blacklist, Doherty doesn’t romanticize the Ten or try to justify the excesses of HUAC. Instead, he highlights a lesser-known aspect of the hearings: the dilemma of Hollywood centrists and liberals squeezed between the extremists on both sides. Like anti-Trump conservatives today, anti-Communist liberals in late 1940s Hollywood found that the middle could be a very lonely place. Mark Horowitz, Commentary

A lively and highly readable account. . . . Show Trial provides a vivid picture of an episode in US history that, for a barely credible mixture of political ugliness and downright farce, has rarely been equalled. Or at least, not until recently. Philip Kemp, Sight & Sound

Show Trial is a solid piece of reportage on a specific event that had shattering results. . . . We’ve all read accounts of this fateful showdown between Washington and Hollywood, but never in such depth or with such well-informed commentary. Leonard Maltin

A difficult book to summarize, Show Trial reflects a lot of hard work and has interesting content almost page by page. The fresh research is fascinating, much of it from recently released HUAC documents revealing (partly) what went on backstage of the extravaganza. Patrick McGilligan, Cineaste

Show Trial may not be the final word on HUAC and Hollywood but it will be the must-cite source wherever academic research encounters the HUAC and Hollywood nexus, especially concerning the year of 1947. Michael Kitson, Senses of Cinema

Doherty's numerous biographical asides enhance the readability of his work while providing much-needed nuance regarding a complicated period of American history. Choice

General readers will enjoy the rich anecdotal material and the bright and breezy style of Doherty's work. Scholars will also find in the narrative and the sources the raw materials of future work. Historian

An excellent introduction to the topic for a younger generation who may not have known that the Trump era is not the first in U.S. history to play fast and loose with the Constitution. Jan-Christopher Horak, Archival Spaces: Memory, Images, History

Program Notes
Thanks and Acknowledgments
List of Abbreviations
Part I. Backstories
1. How the Popular Front Became Unpopular
2. Hollywood’s War Record
3. The Preservation of American Ideals
4. The Magic of a Hollywood Dateline
5. Smearing Hollywood with the Brush of Communism
Part II. On Location in Washington
6. Showtime
7. Lovefest
8. Friendlies, Cooperative and Uncooperative
9. Hollywood’s Finest
10. Doldrums
11. Crashing Page 1
12. Contempt
13. $64 Questions and No Answers
14. Jewish Questions
15. The Curtain Drops
Part III. Backfire
16. The Waldorf and Other Declarations
17. Blacklists and Casualty Lists
18. Not Only Victims
A Bibliographical Note
Notes
Index