Slow Boat to China and Other Stories 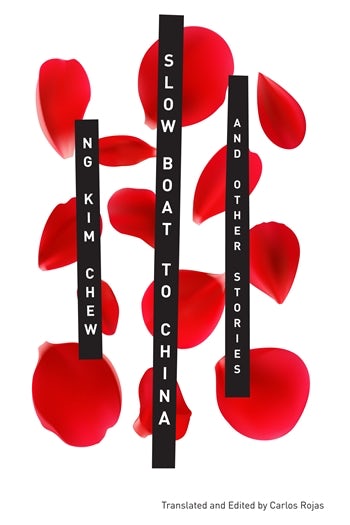 Slow Boat to China and Other Stories

"Dream and Swine and Aurora," "Deep in the Rubber Forest," "Fish Bones," "Allah's Will," "Monkey Butts, Fire, and Dangerous Things"—Ng Kim Chew's stories are raw, rural, and rich with the traditions of his native Malaysia. They are also full of humor and spirit, demonstrating a deep appreciation for human ingenuity in the face of poverty, oppression, and exile.

Ng creatively captures the riot of cultures that roughly coexist on the Malay Peninsula and its surrounding archipelago. Their interplay is heightened by the encroaching forces of globalization, which bring new opportunities for cultural experimentation, but also an added dimension of alienation. In prose that is intimate and atmospheric, these sensitively crafted, resonant stories depict the struggles of individuals torn between their ancestral and adoptive homes, communities pressured by violence, and minority Malaysian Chinese in dynamic tension with the Islamic Malay majority. Told through relatable characters, Ng's tales show why he has become a leading Malaysian writer of Chinese fiction, representing in mood, voice, and rhythm the dislocation of a people and a country in transition.

In this volume of obsessive, humorous, and scatological stories, Ng confronts issues of ethnicity, language, culture, and how they create both identity and conflict in multiethnic Southeast Asia. John Balcom, translator of Memories of Mount Qilai: The Education of a Young Poet by Yang Mu

Ng Kim Chew's work showcases some of the most exciting contemporary short fiction written in Chinese, deftly combining narrative experimentation, conceptual sophistication, and plot development. Thanks to its thoughtful selection and care for highlighting Ng's reflections on the medium of writing in multicultural and multiethnic contexts, Carlos Rojas's translation makes Ng's fiction accessible for an English-language readership without sacrificing the self-reflexive complexity and intercultural creativity of his work. Andrea Bachner, Cornell University, author of Beyond Sinology: Chinese Writing and the Scripts of Culture

A long awaited translation of one of the most interesting and fascinating voices in Sinophone literature today. Ng's critical views have been as important for the study of Malaysian Chinese literature in the global scene as his fiction has been for opening up modern Chinese literature to its other dimensions. Rojas's translation is accessible and wonderfully done, with the sensitivity of a scholar's eye. Jing Tsu, Yale University, author of Sound and Script in Chinese Diaspora

Intricate postmodern stories plumb the complexities of the Malaysian Chinese experience... the standouts burst with absurd humor and a surreal vitality in the face of post-colonial alienation, violence, and ethnic conflict. Kirkus Reviews

Ng speaks for those who do not fully conform to one culture or identity. World Literature Today

Carlos Rojas, Chinese translator extraordinaire, doesn't disappoint in his masterful rendering of Ng's tricky prose.... As an English introduction to a great Malaysian author, I could hardly ask for better. Asymptote

An introduction to a different take on both modern Southeast Asian and Chinese literature, casting some familiar territory in unfamiliar ways. Peter Gordon, Asian Review of Books

Introduction: Ng Kim Chew and the Writing of Diaspora
The Disappearance of M
Dream and Swine and Aurora
Death in the South
Deep in the Rubber Forest
Fish Bones
Allah's Will
Monkey Butts, Fire, and Dangerous Things
Supplication
Untouchable
Slow Boat to China
Supplement
Inscribed Backs

Read "The Disappearance of M," the first story of the collection:

Ng Kim Chew was born in Johor, West Malaysia, and lives in Taiwan, where he is a professor of Chinese literature at National Chi Nan University. His short story collections include Dreams, Pigs, and Dawn; Dark Nights; From Island to Island: Carved Spins; Earth and Fire: The Land of the Malay People; and Memorandums of the South Seas People's Republic. He has won numerous awards for his fiction, including the United Daily Literary Award and the China Times Literary Award.

Carlos Rojas is associate professor of Chinese cultural studies, women's studies, and arts of the moving image at Duke University. He is the translator of Yan Lianke's Lenin's Kisses and The Four Books, which won the Franz Kafka Prize, and, with Eileen Cheng-yin Chow, has translated Yu Hua's two-volume novel, Brothers, which was short-listed for the Man Asian Literary Prize.