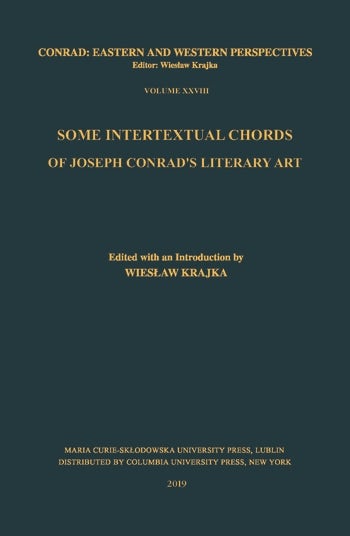 This monograph brings together studies that deal with various aspects of Joseph Conrad’s literary art. The core concept organizing its structure is intertextuality. Intertextual relationships are seen in terms of either affinities/points of contact and the influence of earlier literary works upon his oeuvre or the influence of Conrad’s texts upon literary works by authors following him. Each such relationship is understood as a chord that is vibrant and resonates with new meanings that emerge from the juxtaposition of literary works by Conrad with those by other artists; these new meanings add additional value and significance to Conrad’s literary art.

The papers create a truly international constellation of criticism, with their authors affiliated at universities in France, United Kingdom, Turkey, India, Japan, and Poland. The papers apply various types of comparative treatment of Joseph Conrad’s texts: to juxtapose them with literary works by other authors, with specimens of a literary genre, with texts of other fine arts, with aesthetic, philosophical, and ideological tendencies of the epoch. They apply a diverse range of perspectives to Conrad’s literary art, its intertexts, and contexts. The book is a tribute to the literary artistry of Conrad’s literary output, to its tremendous and inexhaustible semantic and artistic potential to be further explored.
Wiesław Krajka: Introduction
Peter Vernon: “More perjured eye”: On the Relevance of Under Western Eyes
Megha Agarwal: Dissent and Descent: Literary Guidance and Transgression in the
Inferno and “Heart of Darkness”
Agata Łukasiewicz: Evil Lurking in the Shadows: An Analysis of the Supernatural
in Joseph Conrad’s “”The Inn of the Two Witches”
Jacek Mydla: Spiritualism, Utilitarianism, and Sympathetic Narration in “The Black
Mate”
Valerie Kennedy: Mapping the Darkness: The World and the Self in Joseph Conrad’s
“Heart of Darkness” and Graham Greene’s Journey without Maps
Wojciech Kozak: Conrad’s Africa Revisited: The Case of Muriel Spark
Subhadeep Ray: Modernism’s Footprints: World, Text, and Ideology in Joseph Conrad
and Manik Bandyopadhyay
Katarzyna Sokołowska: The Visual and Beyond in Conrad’s “The Return”
Kaoru Yamamoto: La folie Almayer: Madness in Joseph Conrad and René Magritte
Index of Non-Fictional Names
Index of Conrad’s Works and Letters

Wiesław Krajka is a professor in the English Department at Maria Curie-Skłodowska University in Lublin, Poland, and Jan Kochanowski University in Kielce, Poland. His research interests cover English nineteenth- and twentieth-century literature (especially Joseph Conrad), literary theory, and comparative literature. He is the author of Isolation and Ethos: A Study of Joseph Conrad (1992) and editor of Joseph Conrad’s Authorial Self: Polish and Other (2018), among others, and editor of the series Conrad: Eastern and Western Perspectives, published by Maria Curie-Skłodowska University Press.