From Earliest Times to 1600, second edition 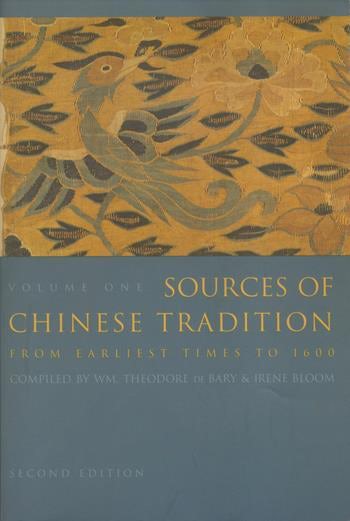 From Earliest Times to 1600, second edition

A collection of seminal primary readings on the social, intellectual, and religious traditions of China, Sources of Chinese Tradition, Volume 1 has been widely used and praised for almost forty years as an authoritative resource for scholars and students and as a thorough and engaging introduction for general readers. Here at last is a completely revised and expanded edition of this classic sourcebook, compiled by noted China scholars Wm. Theodore de Bary and Irene Bloom. Updated to reflect recent scholarly developments, with extensive material on popular thought and religion, social roles, and women's education, this edition features new translations of more than half the works from the first edition, as well as many new selections.

Arranged chronologically, this anthology is divided into four parts, beginning at the dawn of literate Chinese civilization with the Oracle-Bone inscriptions of the late Shang dynasty (1571–1045 B.C.E.) and continuing through the end of the Ming dynasty (C.E. 1644). Each chapter has an introduction that provides useful historical context and offers interpretive strategies for understanding the readings.

The first part, The Chinese Tradition in Antiquity, considers the early development of Chinese civilization and includes selections from Confucius's Analects, the texts of Mencius and Laozi, as well as other key texts from the Confucian, Daoist, and Legalist schools. Part 2, The Making of a Classical Culture, focuses on Han China with readings from the Classic of Changes (I Jing), the Classic of Filiality, major Han syntheses, and the great historians of the Han dynasty. The development of Buddhism, from the earliest translations from Sanskrit to the central texts of the Chan school (which became Zen in Japan), is the subject of the third section of the book. Titled Later Daoism and Mahayana Buddhism in China, this part also covers the teachings of Wang Bi, Daoist religion, and texts of the major schools of Buddhist doctrine and practice. The final part, The Confucian Revival and Neo-Confucianism, details the revival of Confucian thought in the Tang, Song, and Ming periods, with historical documents that link philosophical thought to political, social, and educational developments in late imperial China.

With annotations, a detailed chronology, glossary, and a new introduction by the editors, Sources of Chinese Tradition will continue to be a standard resource, guidebook, and introduction to Chinese civilization well into the twenty-first century.
Part 1. The Chinese Tradition in Antiquity
1. The Oracle-Bone Inscriptions of the Late Shang Dynasty, by David N. Keightley
2. Classical Sources of Chinese Tradition, by Burton Watson, David S. Nivison, Irene Bloom
3. Confucius and the Analects, by Irene Bloom
4. Mozi: Utilitarianism, Uniformity, and Universal Love, by Burton Watson
5. The Way of Laozi and Zhuangzi
6. The Evolution of the Confucian Tradition in Antiquity
7. Legalists and Militarists
Part 2. The Making of a Classical Culture
8. The Han Reaction to Qin Despotism
9. Syncretic Visions of State, Society, and Cosmos, by Harold Roth, Sarah Queen, Nathan Sivin
10. The Imperial Order and Han Syntheses
11. The Economic Order, by Burton Watson, Wm. Theodore deBary
12. The Great Han Historians, by Burton Watson
Part 3. Later Daoism and Mahyana Buddhism in China
13. Learning of the Mysterious, by Richard John Lynn, Wing-tsit Chan, Irene Bloom
14. Daoist Religion, by Franciscus Verellen, Nathan Sivin, et al.
15. The Introduction of Buddhism, by Leon Hurvitz, Tsai Heng-ting
16. Schools of Buddhist Doctrine, by Leon Hurvitz, Burton Watson, Daniel Stevenson, George Tanabe, Wing-Tsit Chan
17. Schools of Buddhist Practice, by Leon Hurvitz, Daniel Stevenson, Philip B. Yampolsky, Chun-fang Yu
Part 4. The Confucian Revival and Neo-Confucianism
Social Life and Political Culture in the Tang
The Confucian Revival in the Song
Neo-Confucianism: The Philosophy of Human Nature and the Way of the Sage
Zhu Xi's Neo-Confucian Program, by Wm. Theodore deBary
Ideological Foundations of Late Imperial China, by Wm. Theodore deBary, Edward Farmer, John Dardess
Neo-Confucian Education, by Wm. Thedore deBary
Self and Society in the Ming
Glossary
Bibliography
Pinyin to Wade-Giles Romanization Chart
Index

Wm. Theodore de Bary (1919–2017) was John Mitchell Mason Professor Emeritus and provost emeritus of Columbia University. His many books include Waiting for the Dawn, Message of the Mind, and Learning for One’s Self, as well as Sources of Japanese Tradition and Sources of Korean Tradition, all published by Columbia University Press.

Irene Bloom (1939–2010) was Wm. Theodore and Fanny de Bary and Class of 1941 Associate Professor of Asian Humanities at Columbia University and Anne Whitney Olin Professor Emerita in the Department of Asian and Middle Eastern Cultures at Barnard College. She edited and translated Knowledge Painfully Acquired: The K’un-chih chi of Lo Ch’in-shun and coedited, with Joshua A. Fogel, Meeting of Minds: Intellectual and Religious Interaction in East Asian Traditions of Thought.