A History of Columbia University 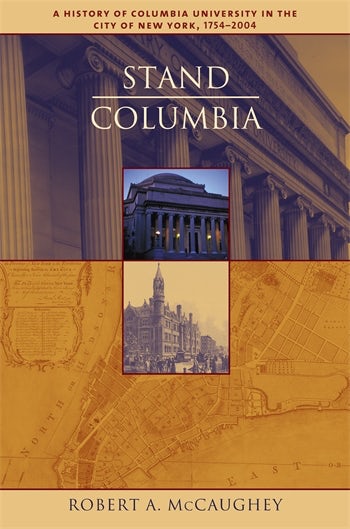 A History of Columbia University

Through the storms of Time abide

Through the storms of Time abide.

Marking the 250th anniversary of one of America's oldest and most formidable educational institutions, this comprehensive history of Columbia University extends from the earliest discussions in 1704 about New York City being "a fit Place for a colledge" to the recent inauguration of president Lee Bollinger, the nineteenth, on Morningside Heights. One of the original "Colonial Nine" schools, Columbia's distinctive history has been intertwined with the history of New York City. Located first in lower Manhattan, then in midtown, and now in Morningside Heights, Columbia's national and international stature have been inextricably identified with its urban setting.

Columbia was the first of America's "multiversities," moving beyond its original character as a college dedicated to undergraduate instruction to offer a comprehensive program in professional and graduate studies. Medicine, law, architecture, and journalism have all looked to the graduates and faculty of Columbia's schools to provide for their ongoing leadership and vitality. In 2003, a sampling of Columbia alumni include one member of the United States Supreme Court, three United States senators, three congressmen, three governors (New York, New Jersey, and California), a chief justice of the New York Court of Appeals, and a president of the New York City Board of Education. But it is perhaps as a contributor of ideas and voices to the broad discourse of American intellectual life that Columbia has most distinguished itself. From The Federalist Papers, written by Columbians John Jay and Alexander Hamilton, to Charles Beard's An Economic Interpretation of the Constitution and Jack Kerouac's On the Road to Edward Said's Orientalism, Columbia and its graduates have greatly influenced American intellectual and public life. Stand, Columbia also examines the experiences of immigrants, women, Jews, African Americans, and other groups as it takes critical measure of the University's efforts to become more inclusive and more reflective of the diverse city that it calls home.

fascinating stories of the past that seem eerily familiar in the present, even for those who have never set foot on the Columbia campus Katherine Reynolds Chaddock, Academe

1. Tory Preamble: The Short History of King's College
2. Flirting with Republicanism, 1784--1816
3. Knickerbocker Days: The Limits of Academic Reform
4. Midcentury Stirrings
5. Takeoff
6. The Aspect of a University
7. Bolt to the Top
8. 1917: Twilight of Idols
9. Jews at Columbia
10. The Invention of Columbia College
11. Prosperity Lost
12. Columbia in the American Century
13. A Second Flowering
14. Afternoon on the Hudson
15. Riding the Whirlwind: Columbia '68
16. It's About Columbia
17. A Tough Place
18. Bottoming Out
19. Columbia Recovered
20. The Way We Are
Epilogue: Worth the Candle?

Robert McCaughey is the chairman of the Barnard History Department and the former dean of the faculty of Barnard College. He is the author of The Last Federalist: Josiah Quincy, 1772–1864 and International Studies and Academic Enterprise: A Chapter in the Academic Enclosure of American Learning, among other books.