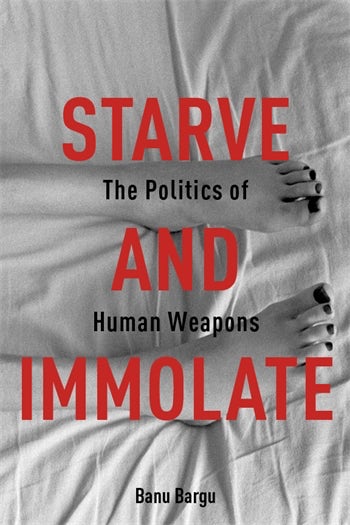 Starve and Immolate tells the story of leftist political prisoners in Turkey who waged a deadly struggle against the introduction of high security prisons by forging their lives into weapons. Weaving together contemporary and critical political theory with political ethnography, Banu Bargu analyzes the death fast struggle as an exemplary though not exceptional instance of self-destructive practices that are a consequence of, retort to, and refusal of the increasingly biopolitical forms of sovereign power deployed around the globe.

Bargu chronicles the experiences, rituals, values, beliefs, ideological self-representations, and contentions of the protestors who fought cellular confinement against the background of the history of Turkish democracy and the treatment of dissent in a country where prisons have become sites of political confrontation. A critical response to Michel Foucault's Discipline and Punish, Starve and Immolate centers on new forms of struggle that arise from the asymmetric antagonism between the state and its contestants in the contemporary prison. Bargu ultimately positions the weaponization of life as a bleak, violent, and ambivalent form of insurgent politics that seeks to wrench the power of life and death away from the modern state on corporeal grounds and in increasingly theologized forms. Drawing attention to the existential commitment, sacrificial morality, and militant martyrdom that transforms these struggles into a complex amalgam of resistance, Bargu explores the global ramifications of human weapons' practices of resistance, their possibilities and limitations.

Combining original theorizing with state-of-the-art ethnography, Banu Bargu gives us a rare inside look at political practices that are increasingly salient but little understood. At once a case study of a Turkish prison death fast, and a bold conceptualization of broader phenomena of "necroresistance," her book analyzes the practice of actors who, lacking anything but their bodies, turn themselves into "human weapons." Simultaneously humane and sober, engaged and precise, Starve and Immolate is a riveting read and a tour de force. Nancy Fraser. Loeb Professor of Philosophy and Politics, New School for Social Research, Einstein Fellow, Freie Universität-Berlin, Global Justice Chair, Collège d'études mondiales, Paris

This meticulously researched and beautifully written book immerses readers in two worlds: Turkish prison resistance and the contemporary theory that might illuminate its meanings. Banu Bargu teaches theory as she goes but also presses hard on every theorist and concept in her arsenal, from Marx to Mbembe, from theological politics to biopolitics, to extract what she needs for a compelling argument. With Starve and Immolate, an original, powerful, and fearless new political thinker arrives on the scene. Wendy Brown, University of California, Berkeley

Starve and Immolate interweaves a sensitive ethnography of disembodiment and deft political theory to lucidly reconstruct the constitutive antagonisms of Turkish political culture as archived in prison hunger strikes. With trenchant critiques of biopower, sovereignty, and the prison-military-industrial complex, Bargu crafts a materialist theory of constitutive power in stark collision with biologizing and faux humanitarian force. Bargu situates 'necroresistance' within the securocratic drives of a counterinsurgent culture of the state within and beyond Turkey. She expands our comprehension of how such threshold acts can build political literacies and polities able to risk the body for a politics of life beyond biopower. Allen Feldman, New York University, author of Formations of Violence: The Narrative of the Body and Political Terror in Northern Ireland

This extraordinary book movingly and effectively describes and analyzes the history of the death fast movement in the early years of the twenty-first century in Turkey. It is a treasure trove of material, both empirical and theoretical, making it at once a wonderful (though grim) account and a thoughtful reflection on what prisons do and how they do it, as well as what forms of resistance are effective or even possible when and where. Laleh Khalili, SOAS, University of London, author of Time in the Shadows: Confinement in Counterinsurgencies

Starve and Immolate is an original and excellent book in the field of political theory. Banu Bargu's attempt to approach the 'death fast' or 'weaponization of body' as politically motivated forms of resistance opens up interesting and innovative spaces for us to rethink the concepts of sovereignty, power, politics, and resistance. Fuat Keyman, Sabanci University

Starve and Immolate is more than a rigorously documented account of a major resistance movement; it is a complex and erudite, yet lucid, theoretical analysis of the politics of life and death that draws upon, but ultimately moves beyond (among others), Foucault's and Agamben's readings of sovereignty and biopolitics to make a major contribution to thinking about relations of power and resistance in contemporary society... A much-discussed literature is made fresh again through Bargu's impressive skill... Radical Philosophy

...a sophisticated and meticulously documented analysis...this book offers an invaluable contribution to the existing literature on power and resistance. Basak Can, New Perspectives on Turkey

In this remarkable book, Bargu frames a political ethnography of hunger strikes in Turkish prisions with debates about Foucault's critique of biopolitical power... Elegantly written and argued, this text is a compelling empirical and theoretical contribution. Choice

Acknowledgments
Abbreviations
Introduction: The Death Fast Struggle and the Weaponization of Life
1. Biosovereignty and Necroresistance
2. Crisis of Sovereignty
3. The Biosovereign Assemblage and Its Tactics
4. Prisoners in Revolt
5. Marxism, Martyrdom, and Memory
6. Contentions Within Necroresistance
Conclusion: From Chains to Bodies
Notes
Bibliography
Index

Read an excerpt from the introduction, "The Death Fast Struggle and the Weaponization of Life,":

Banu Bargu (PhD, Government, Cornell) is Associate Professor of Politics at the New School for Social Research. She is the author of Starve and Immolate: The Politics of Human Weapons (Columbia, 2014), which received the First Book Prize in political theory from APSA, and the coeditor of Feminism, Capitalism, and Critique: Essays in Honor of Nancy Fraser (Palgrave, 2017).