Stories from the Field

A Guide to Navigating Fieldwork in Political Science 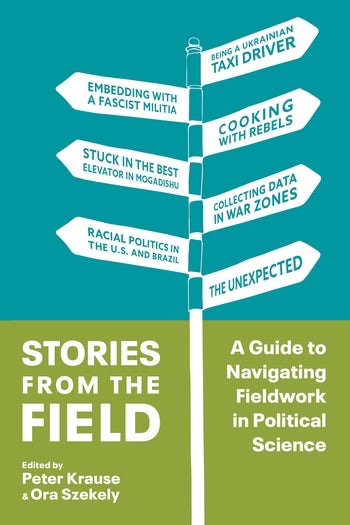 Stories from the Field

A Guide to Navigating Fieldwork in Political Science

What do you do if you get stuck in an elevator in Mogadishu? How worried should you be about being followed after an interview with a ring of human traffickers in Lebanon? What happens to your research if you get placed on a government watchlist? And what if you find yourself feeling like you just aren’t cut out for fieldwork?

Stories from the Field is a relatable, thoughtful, and unorthodox guide to field research in political science. It features personal stories from working political scientists: some funny, some dramatic, all fascinating and informative. Political scientists from a diverse range of biographical and academic backgrounds describe research in North and South America, Africa, Asia, Europe, and the Middle East, ranging from archival work to interviews with combatants. In sharing their stories, the book’s forty-four contributors provide accessible illustrations of key concepts, including specific research methods like conducting surveys and interviews, practical questions of health and safety, and general principles such as the importance of flexibility, creativity, and interpersonal connections. The contributors reflect not only on their own experiences but also on larger questions about research ethics, responsibility, and the effects of their personal and professional identities on their fieldwork. Stories from the Field is an essential resource for graduate and advanced undergraduate students learning about field research methods, as well as established scholars contemplating new journeys into the field.

The breadth of life experience captured in this collection is the reason this volume has great pedagogical potential. A lot of graduate students will flip to find their academic heroes and crushes and then keep reading. Authors are writing with different agendas, but always in a first-person voice. The effect is to give the volume both intellectual heft and a personal touch.

I love this book. I want every first year political science student, all graduate students, and each of my colleagues to read it. Krause and Szekely deliver the real deal: how to do rigorous field research while always being candid, be ready to change well-laid plans, stay agile and acutely curious. In every chapter here, I laughed and I learned.

Introduction: Learning Through Stories
Peter Krause and Ora Szekely
I. Welcome to the Field
1. Fieldwork and Emotions, by Ian S. Lustick
2. Cooking Soup and Killing Chickens: Navigating Gender and Food-as-Fieldwork in West Africa, by Zoe Marks
3. Recite! Interpretive Fieldwork for Positivists, by Richard A. Nielsen
II. Designing Your Research and Deciding Where to Go
4. Fieldwork by Decree, Not by Design, by Stathis N. Kalyvas
5. Conducting 1,500 Surveys in New York City (With Great Uncertainty and a Limited Budget), by Christina M. Greer
6. Hezbollah Will Take Your Data: How to Plan for Research Among Insurgents, by Krista E. Wiegand
7. When the Linguistic Lightweight Goes Abroad: Relying on Sharp Students by Stephen M. Saideman
8. Navigating Data Collection in War Zones, by Fotini Christia
III. Make a Plan . . . Then Be Ready to Toss It
9. Let Go and Let Ali, by Nadya Hajj
10. Be Prepared (To Go Off Script), by Daniel N. Posner
11. Radio Gaga: Evolving Field Experiments in Mali, by Kristin Michelitch
12. Crossed Wires: Interviewing the Wrong People, by Bethany Lacina
13. “You Don’t Know What You’re Getting Into”: Dealing with Dishonesty in the Field, by Matthew Franklin Cancian and Kristin E. Fabbe
14. Successful Fieldwork for the Fieldwork-Hater, by Amelia Hoover Green
IV. Creatively Collecting Data and Evidence
15. How to Interview a Terrorist, by Jessica Stern
16. Stumbling Around in the Archives, by Marc Trachtenberg
17. Details in the Doodles: Documenting Covert Action, by Lindsey A. O’Rourke
18. My Stint as a Ukrainian Taxi Driver, by Keith Darden
19. Conducting Fieldwork in a Virtual Space: Exploring ISIS’s Encrypted Messaging on Telegram, by Mia Bloom and Ayse Lokmanoglu
20. All the Signs Are There: Incidental Discoveries During Fieldwork on Gender Discrimination in Russia, by Valerie Sperling
21. Learning from Foreign Colleagues, by Robert Ross
V. Developing Local Knowledge
22. On Field-Being, by Wendy Pearlman
23. Fieldwork on Foot, by Paul Staniland
24. The Onion Principle, by David D. Laitin
25. The Intoxication of Fieldwork: Obtaining Authorizations in Burkina Faso, by John F. McCauley
26. Field Research and Security in a Collapsed State, by Will Reno
27. Building Field Networks in the Era of Big Data, by Amaney Jamal
VI. Seeing and Being Seen: Identity in the Field
28. Researching an Old Civil War Close to Home, by Laia Balcells
29. Positionality and Subjectivity in Field Research, by Enze Han
30. Race and the Study of a Racial Democracy, by Melissa Nobles
31. “Why Are You Interested in That?” Studying Racial Inequality in the United States from the Outside, by Desmond King
32. Navigating Born and Chosen Identities in Fieldwork, by Peter Krause
VII. Being Ethically Accountable
33. On Research That “Matters,” by Erica Chenoweth
34. The Field Is Everywhere, by Zachariah Cherian Mampilly
35. Things Change: Protecting Yourself and Your Sources in Uncertain Times, by Marc Lynch
36. Ethnography with Extremists: Living in a Fascist Militia, by Alessandro Orsini
37. Building Trust with Ex-Insurgents, by Emil Aslan Souleimanov
38. On Being Seen, by Ora Szekely
VIII. Staying Safe and Healthy
39. Conducting Safe Fieldwork on Violence and Peace, by Sarah Zukerman Daly
40. Your Safety and Theirs: Interviewing Sex-Traffickers, by Carla B. Abdo-Katsipis
41. Shingles on the Campaign Trail, by Ravi Perry
42. Drink the Tea, by Vipin Narang
One Last Thing Before You Go . . .
Conclusion: What Does It Mean to Do Fieldwork?, by Peter Krause and Ora Szekely
Index

Peter Krause is associate professor of political science at Boston College and research affiliate with the MIT Security Studies Program. He is the author of Rebel Power: Why National Movements Compete, Fight, and Win (2017) and coeditor of Coercion: The Power to Hurt in International Politics (2018).

Ora Szekely is associate professor of political science at Clark University. She is the author of The Politics of Militant Group Survival in the Middle East: Resources, Relationships, and Resistance (2016) and coauthor of Insurgent Women: Female Combatants in Civil Wars (2019).