The Closure of Metaphysics and the Opening of Awe 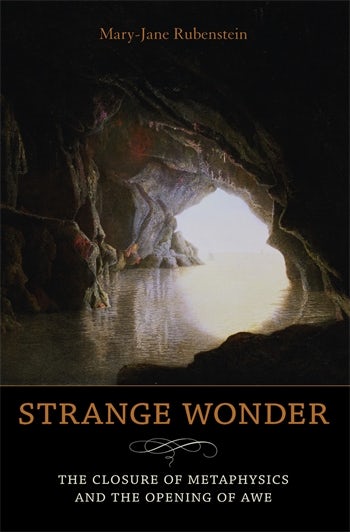 The Closure of Metaphysics and the Opening of Awe

Strange Wonder confronts Western philosophy's ambivalent relationship to the Platonic "wonder" that reveals the strangeness of the everyday. On the one hand, this wonder is said to be the origin of all philosophy. On the other hand, it is associated with a kind of ignorance that ought to be extinguished as swiftly as possible. By endeavoring to resolve wonder's indeterminacy into certainty and calculability, philosophy paradoxically secures itself at the expense of its own condition of possibility.

Strange Wonder locates a reopening of wonder's primordial uncertainty in the work of Martin Heidegger, for whom wonder is first experienced as the shock at the groundlessness of things and then as an astonishment that things nevertheless are. Mary-Jane Rubenstein traces this double movement through the thought of Emmanuel Levinas, Jean-Luc Nancy, and Jacques Derrida, ultimately thematizing wonder as the awesome, awful opening that exposes thinking to devastation as well as transformation. Rubenstein's study shows that wonder reveals the extraordinary in and through the ordinary, and is therefore crucial to the task of reimagining political, religious, and ethical terrain.

One of the most gripping and timely accounts of Continental Philosophy... The reader can only come to the end of this book astonished. Catherine Keller, Modern Theology

In all, the book offers a new understanding of an influential sector of twentieth-century philosophy. Jonathan Malesic, Journal of the American Academy of Religion

a fun read. George Pattison, Reviews in Religion and Theology

Mary-Jane Rubenstein (PhD, Philosophy of Religion, Columbia) is Professor and Chair of Religion at Wesleyan University. She is the author of Worlds Without End: The Many Lives of the Multiverse (Columbia, 2014) and Strange Wonder: The Closure of Metaphysics and the Opening of Awe (Columbia, 2009) and the coeditor (with Catherine Keller) of Entangled Worlds: Science, Religion, Materiality (Fordham, 2017).