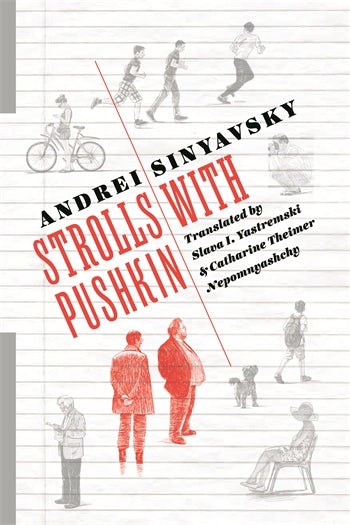 Andrei Sinyavsky wrote Strolls with Pushkin while confined to Dubrovlag, a Soviet labor camp, smuggling the pages out a few at a time to his wife. His irreverent portrait of Pushkin outraged émigrés and Soviet scholars alike, yet his "disrespect" was meant only to rescue Pushkin from the stifling cult of personality that had risen up around him. Anglophone readers who question the longstanding adoration for Pushkin felt by generations of Russians will enjoy tagging along on Sinyavsky's strolls with the great poet, discussing his life, fiction, and famously untranslatable poems. This new edition of Strolls with Pushkin also includes a later essay Sinyavsky wrote on the artist, "Journey to the River Black."

In the guise of a spirited, iconoclastic study of the presiding deity of Russian literature, the great Andrei Sinyavsky (writing as his bolder alter ego, Abram Tertz) has composed an ardent and fastidious attack on philistinism in all its forms: literary, psychological, and political. Susan Sontag

In his alter ego as Tertz, Sinyavsky was the David to every institutional Goliath, picking off the monumental cult of the national poet of the Stalin period and the sentimentalized icon of Russia Abroad. His shock tactics were Pushkinian: irreverent wit, conversational tone, thinking outside the box. And guess what? Pushkin was no saint, but his genius is supremely alive and human in this brilliant appreciation. All readers should find in this spirited classic of literary and cultural criticism, vibrantly translated, expertly introduced and annotated, license to our own individual musings with two great writers and writing. Andrew Kahn, University of Oxford

This translation of Sinyavsky's subversive text achieves the impossible, shocking, entertaining, and beguiling us into a freer, more lively appreciation of the liberating power of language. Cathy Porter, Independent

Given its title, Sinyavsky's work is appropriately rambling and easygoing, but also brilliantly iconoclastic about this most iconic of Russian writers. Michael Dirda, Washington Post

Andrei Sinyavsky (1925–1997) was a writer of fiction and nonfiction. After emigrating to France in 1973, he taught for many years as professor of Slavic studies at the Sorbonne in Paris.

Catharine Theimer Nepomnyashchy (1951–2015) was professor of Russian at Barnard College.

Slava I. Yastremski (1952–2015) was professor of Russian at Bucknell University.