The Definitive Guide to Dystopian Politics 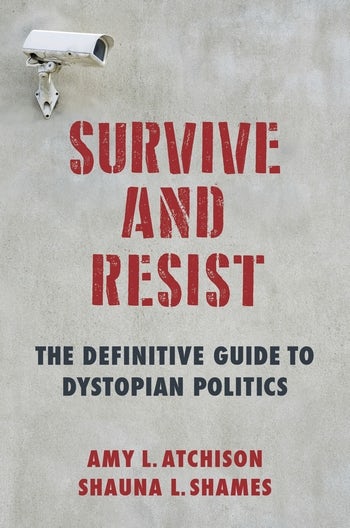 The Definitive Guide to Dystopian Politics

Authoritarianism is on the march—and so is dystopian fiction. In the brave new twenty-first century, young-adult series like The Hunger Games and Divergent have become blockbusters; after Donald Trump’s election, two dystopian classics, 1984 and The Handmaid’s Tale, skyrocketed to the New York Times best-seller list. This should come as no surprise: dystopian fiction has a lot to say about the perils of terrible government in real life.

In Survive and Resist, Amy L. Atchison and Shauna L. Shames explore the ways in which dystopian narratives help explain how real-world politics work. They draw on classic and contemporary fiction, films, and TV shows—as well as their real-life counterparts—to offer funny and accessible explanations of key political concepts. Atchison and Shames demonstrate that dystopias both real and imagined help bring theories of governance, citizenship, and the state down to earth. They emphasize nonviolent resistance and change, exploring ways to challenge and overcome a dystopian-style government. Fictional examples, they argue, help give us the tools we need for individual survival and collective resistance. A clever look at the world through the lenses of pop culture, classic literature, and real-life events, Survive and Resist provides a timely and innovative approach to the fundamentals of politics for an era of creeping tyranny.

It is truly rare to find a text that so deftly serves as an introduction to core political concepts and political resistance in a way that will resonate with activists and students alike. Survive and Resist shows us how to be intellectually engaged with but not discouraged by ideas that often seem too overwhelming to examine in moments of political despair. It does so in a way that is rigorous and disarming, morally serious and fun. A must-read. Alex Zamalin, author of Struggle on Their Minds: The Political Thought of African American Resistance

In this original tour of modern political history, Atchison and Shames argue that dystopian novels (of all things!) offer pretty good guidance to democratic citizens who would prefer truth that is less strange than fiction. Engagingly written, the book is an urgent reminder that decency prevails when people of goodwill join in the frustrating and uncertain practice of self-governance. Kristin Goss, author of The Paradox of Gender Equality: How American Women's Groups Gained and Lost Their Public Voice

Atchison and Shames’ examination of political machinations, tyrannies present and past, and the human desire for “collective resistance” to brutal regimes makes for a sizzling, unsettling, but ultimately reassuring read. Survive and Resist could also serve as an exhilarating and darkly droll primer for authors of dystopian fiction. Shining a light on thuggish, all-too-recognizable totalitarian states, the work takes readers from Atwood to Solzhenitsyn, from Wall-E to Fritz Lang, from The Hunger Games to Uncle Tom’s Cabin, demonstrating how works of political fiction expose evil and corruption, and inspire and encourage communal revolt. I wanted to cheer at the end. I wanted to give copies of Survive and Resist to my students and friends, and then take to the streets. And, I wanted to rediscover every work cited to give me courage for the fight. To quote Atchison and Shames, “Can You (Re)build it? Yes You Can!” Cordelia Frances Biddle, author of Saint Katharine: The Life of Katharine Drexel

Atchison and Shames have somehow gifted us with a concise guide to dystopia that is full of hope and humor. Survive and Resist offers crisp comparisons between fictional dystopias, real totalitarian regimes, and the political science of nondemocratic regimes—their economics, their tactics of control, and, crucially—their weak points and blind spots. It does this with a brisk voice, a quick pace, and a dose of dark humor that should make it a favorite of political science students and speculative fiction diehards. I can’t wait to use it in my teaching. Amelia Hoover Green, author of The Commander’s Dilemma: Violence and Restraint in Wartime

This lucid, intelligent, frequently amusing yet profoundly committed book speaks directly to you and me, the readers, addressing our present urgent political condition with practical lessons drawn from dystopian fiction like 1984 and The Handmaid’s Tale along with important classic and contemporary political theories. Atchison and Shames present political science with clarity, dystopian literature with wit, no easy feats! They show that dystopian literature is something beyond entertainment, beyond thought experiment, beyond exploration of our fear and trembling under the weight of an oppressive body politic. They reveal these works as offering an anatomy of authoritarian societies and thereby a blueprint for understanding, resisting and opposing such societies. It is more than a manifesto of nonviolent action: it is an action plan for resistance in a time of need. Andrew Vogel Ettin, author of Speaking Silences: Stillness and Voice in Modern Thought and Jewish Tradition

Politics meets popular culture in this lively, often lighthearted study. . . . [Survive and Resist] will have broad appeal to readers who appreciate the intersections of pop culture and politics. Library Journal

Acknowledgments
Preface
Introduction
1. Malice in Wonderland
2. Defining Dystopia
3. The Invisible Hand Strikes Again
4. Strategies and Tactics of Dystopian Governments
5. Individual Survival and Resistance
6. The Resistance Will Not Be Intimidated
7. Disintegrating the Oppressor
8. Can You (Re)build It? Yes You Can!
Epilogue
Notes
Index

Amy L. Atchison is associate professor of political science at Valparaiso University. Her work has appeared in journals such as Politics and Gender, the Journal of Political Science Education, and PS: Political Science and Politics, among others.

Shauna L. Shames is associate professor of political science at Rutgers University–Camden. She is the author of Out of the Running: Why Millennials Reject Political Careers and Why It Matters (2017) and coeditor of The Right Women: Republican Party Activists, Candidates, and Legislators (2018).