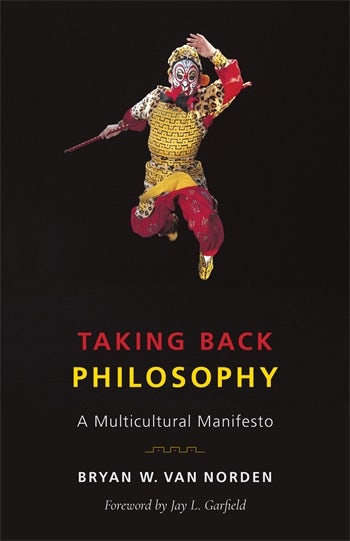 Are American colleges and universities failing their students by refusing to teach the philosophical traditions of China, India, Africa, and other non-Western cultures? This biting and provocative critique of American higher education says yes. Even though we live in an increasingly multicultural world, most philosophy departments stubbornly insist that only Western philosophy is real philosophy and denigrate everything outside the European canon. In Taking Back Philosophy, Bryan W. Van Norden lambastes academic philosophy for its Eurocentrism, insularity, and complicity with nationalism and issues a ringing call to make our educational institutions live up to their cosmopolitan ideals.

In a cheeky, agenda-setting, and controversial style, Van Norden, an expert in Chinese philosophy, proposes an inclusive, multicultural approach to philosophical inquiry. He showcases several accessible examples of how Western and Asian thinkers can be brought into productive dialogue, demonstrating that philosophy only becomes deeper as it becomes increasingly diverse and pluralistic. Taking Back Philosophy is at once a manifesto for multicultural education, an accessible introduction to Confucian and Buddhist philosophy, a critique of the ethnocentrism and anti-intellectualism characteristic of much contemporary American politics, a defense of the value of philosophy and a liberal arts education, and a call to return to the search for the good life that defined philosophy for Confucius, Socrates, and the Buddha. Building on a popular New York Times opinion piece that suggested any philosophy department that fails to teach non-Western philosophy should be renamed a “Department of European and American Philosophy,” this book will challenge any student or scholar of philosophy to reconsider what constitutes the love of wisdom.

A powerful call for a global approach to philosophy, demonstrating in practice what it would mean to bring philosophical ideas from different traditions together to rethink the field of philosophy and to rethink the world around us. A wonderful, highly important, and tremendously exciting work. Michael Puett, author of The Path: What Chinese Philosophers Can Teach Us About the Good Life

Taking Back Philosophy is a high-spirited, passionate, over-the-top and ultimately entirely persuasive argument for the inclusion of Chinese thought in the teaching of philosophy in American and European universities. In so doing, it also presents a brilliant case for the importance of philosophy in the moral and political lives of all of us, not just philosophers or academics let alone academic philosophers. It persuades both through polemical and often hilarious attacks on narrow-minded European philosophers and even more narrow-minded American academics and through positive examples of ways in which texts from different traditions can illuminate one another. It will make some people hopping mad and convert many others to the worthy cause of multiculturalism. Wendy Doniger, author of The Ring of Truth, and Other Myths of Sex and Jewelry

Bryan Van Norden's Taking Back Philosophy is a take-no-prisoners attack on normal philosophy, the kind that sees itself as a series of footnotes to Plato. Jay Garfield’s polemical foreword provides compelling evidence that philosophy in the Anglophone world is structurally racist. Van Norden’s text provides a crystal-clear argument for philosophy in a new and inclusive key. If philosophy is concerned with the contours of truth, goodness, and beauty, it will need to open itself to the deep and long-lived philosophical traditions of China, India, Africa, and the Americas. A discipline-changing manifesto! Owen Flanagan, author of The Geography of Morals: Varieties of Moral Possibility

Taking Back Philosophy throws down the gauntlet to the way philosophy has traditionally been taught—and in most places continues to be taught—by the Western philosophical establishment. The book is a must-read for anyone who teaches philosophy or who thinks that there is no philosophy outside the traditions originating in Ancient Greece. Graham Priest, author of One: Being an Investigation Into the Unity of Reality and of Its Parts, Including the Singular Object Which Is Nothingness

Van Norden challenges philosophers in ways they have never been challenged before while also making the most compelling case I have ever seen for the value of a philosophical education and its very practical benefits for societies that care about promoting civil discourse. He writes engagingly about what philosophy is and what it should be, moving seamlessly between the voices of Chinese, Indian, and Western philosophers, presidential candidates, and Supreme Court justices and offering colorful examples from film, literature, and everyday life. It is at once a stinging indictment of the exclusion of diverse perspectives from the discipline of philosophy and a ringing endorsement of the value of studying philosophy. Erin M. Cline, author of Families of Virtue: Confucian and Western Views on Childhood Development

A delightful book that takes a global perspective, challenging narrowness in the current philosophic, political, and cultural scene. Stephen H. Phillips, author of Yoga, Karma, and Rebirth: A Brief History and Philosophy

A vigorous, clear, and convincing book suitable for any reader who cares about philosophy, the liberal arts, or the relevance of diverse cultures to basic questions about how we ought to live. Aaron Stalnaker, coauthor of Religious Ethics in a Time of Globalism: Shaping a Third Wave of Comparative Analysis

An important book. Philosophers working within and outside departments of philosophy should read and reflect thoughtfully on its arguments. Reading Religion

This is a wonderfully lucid, purposefully polemical tract calling for non-Western philosophies to be introduced into University curricula. New York Review of Books

A spirited defense of philosophy as a dialogue that should include multiple perspectives and traditions. Choice

Van Norden does more in this direction. He is explicitly trying to persuade philosophers that there are not only thought-provoking and culturally resonant world views in non-Western thought, but argumentative complexity as well. Especially in his second chapter, Van Norden offers deft sketches of dialectical debates from ancient China that could well remind modern-day philosophers of what they themselves do daily. This, I think, is the best way to appeal to philosophers and convince them of the merits of non-Western philosophy. Peter Adamson, The Times Literary Supplement

Taking Back Philosophy is essential reading for those in the field of philosophy, but scholars and students across the humanities and social sciences in Asian studies will find much to enjoy and will benefit from this book. Patrick D. Buck, Journal of Asian Studies

A long-awaited and much needed manifesto on multicultural curricula in the academic discipline of philosophy. Li-Hsiang Lisa Rosenlee, University of Hawai'i, Philosophy East and West

Accessible, witty, and polemically engaging...an impressive achievement and an important voice to be added to the chorus that has for some decades been calling for a transformation of philosophy in the Western world. David H. Kim, University of San Francisco, Philosophy East and West

Jay L. Garfield is Doris Silbert Professor in the Humanities and professor of philosophy, logic, and Buddhist studies at Smith College.